1 year of farming. Where did it get you?

I started chia farming on the wave of hype. Late May / early June 2021. Back then, the official pooling protocol hasn’t launched yet.

Then MadMax came about and it was a game changer. About at the end of June / early July, the pooling protocol launched, and I joined Flexpool from day 1, and started replotting to NFT standard. 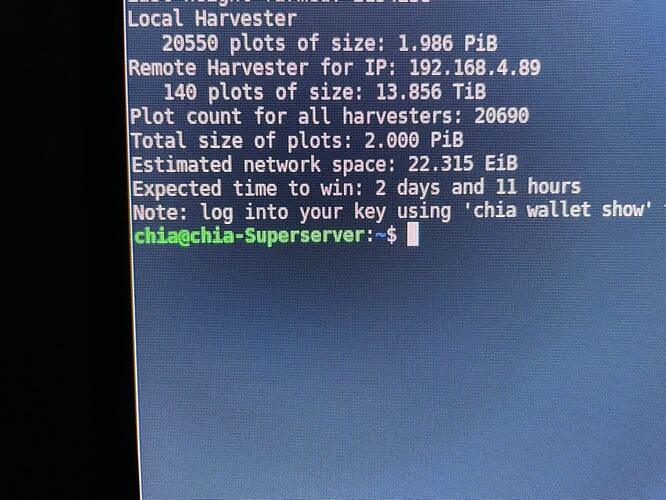 I’ve always been farming full node. The farm has undergone a huge transformation during this one year. I’m almost done selling off / repurposing the e-waste I acquired during early months of farming. Currently running enterprise/server equipment for the most part. Speaking of the equipment, I could’ve bought a nice sports car for the $$$ I spend on this endeavor. Not sure if it was a better option - last few months was more of a grind than fun.

Saw some early adopters on this forum, initially enthusiastic, deflate quickly and quit.

What do you make of this now? Ready for the long run? About to quit?

I like the idea of a challenge of complexity, initially struggled with, then learned and conquered, and finally incorporated into a lifestyle of understanding and future potential.

I’m glad for one thing. I didn’t invest in a bunch of hardware to hold the things that make the money. A completely unnecessary luxury that might have made sense in the “glory days” when the hype train was going full steam ahead. Imagine the ROI on server equipment with Chia at around $30. People get on me about HBAs and cables! I would be curious who would be new to Chia today, what choices they might make. The only issue is that there really aren’t any new entrants. The people farming Chia are from a year or so ago largely and we all know how exciting things looked back then. Frivolous purchases galore.

I don’t do things because it’s the popular or trendy way of doing things. The most exciting time for me is now simply because net space is low so yield is high. The more that drop out the better. People who made the unwise expenditures are tapping out and for good reason. ROI are near impossible unless of course you are all about yield. Even then, people will say buy the coin, it’s the wise way to go.

The know-it-alls simply know it all. But I see this through the lens of a $30 Chia and I would suspect purchases done 3+ months ago were bad ideas then and are worse now. I am simply going to yield as much as I can for the cheapest possible capital investment. And yes, you better believe that has nothing to do with off the store shelf hardware. The day you get the prices I get for hardware to do the exact same thing you are doing with your hardware? That day will never come.

Message boards are like the net space. Lower participation than ever. Few participants than ever. You might think that the conversations get better like the yield, but I’ve found it quite the opposite actually.

That’s opposite to me. I’ve gone from dell server/sas to pc/usb and flatlined at 417TB. I value xch at $70, so I can’t sell any to buy more TB anymore

So i thought this was great post.
I started quite bullish spent what i had to get drives & small harvester
In one year I have not earned a single coin, apart from pooling which was 1.2
I have heard nothing from the community or about chia in crypto
& honestly feel this coin is dead. The crypto winter doesn’t help at its current rate i will ROI in ten years….
Oh my OS STB & my keys are no longer valid on my plots so i have to start over again….YAY!!!

I’m not afraid to admit this. I started last year, acquired gear, then stopped. I relearned everything a month ago or so. Seems crazy right? Well, my principle saved me because I don’t give a S about drive size for the most part. I care about the cost of storage and the cheapest that I could acquire, taking into account if I need to add cables or HBAs to the cost per TB. With the price of Chia and the uncertainty? I let the drives collect dust while I cashed in on ETH instead. Sure I might have got a coin or two but take a cold hard look at net space. I would have made very little over this time.

It’s only now that I’m interested and that’s because it took the collapse of the coin value to shake people off from farming. That has happened. Yield can happen so count me in. I’m not looking so much at ROI at this point. I’m not joining a pool. I’m going in solo and I’m not spending a penny on a “thing” to hold the things that make money. I’m talking about spending the absolute bare minimum on this. I am fully prepared to scale up to whatever level, with no cap on that. I just need to believe in Chia and believe in the project.

So to me, if I had rolled everything out last year and continued all year up until now? I feel a lot of that would be like pissing in the wind. Instead I can actually solo plot and actually yield some XCH whereas that would be mission near impossible with the net space so high over the past year. I like to go out fishing when only a few wise anglers are out there. Only a few guys (gals). Must be no fish. Nobody is out there right now. So if you are making XCH right now? Kindly zip it. YouTube views vs. your yield. Which you prefer?

Like the OP I started in May last year, I’ve spent £1000’s, hate to think how much, could of bought another array of solar panels, and a big set of batteries and saved some money off our electric bill. I have 26 XCH, and 284TiB of plots. Win’s are very slow, but luckily I’ve been pooling since September.

I’ve got too plotters sat in the other room, one’s up for sale, but no takers yet, I’ll hang on to the other which was a replacement for the one I’m selling.

I’m not sure I’ll ever ROI, unless XCH really takes off, but I hope if it does it’s many years off, I want to keep building up my XCH.

I have been farming for a year, pooling as soon as I could. I have plenty of XCH and current coin price is irrelevant to me as this was always a 3-5 year project. Due to crypto winter, my time horizon may have to elongate but I have plenty of time.

At current net space I am farming one XCH per week.

I’ve bought some XCH recently instead of investing in more hardware. I’m about 8000 Euro in hardware for 245 TiB. (Some learning money in there as well).

Because of the crazy price of electricity, I’m building a new farmer now that will be more energy efficient.

I think the project is well on track overall. Some important additions to the team were made recently and a few big projects are lined up for the end of the year.

I feel confident Chia will get up to a point where I at least get my money back.

I’m pretty much identical to the OP except for overall farm size and the pool that was joined. I topped out at just over 600TB and I joined PoolChia. As I’ve said in many other threads, for me, this was a 5 year plan from the beginning and as long as Chia sticks to their plan I’m on board. As far as I can tell, they are on track. I earn at least 1.5XCH per week and I’m sitting on a pretty good stockpile. I have a significant investment in this and I keep track of every penny spent and XCH earned/bought. Currently, with what I have, XCH would have to be $302 for me to break even. With what I earn, that number drops $4 to $5 per week. And yes, that includes electricity costs.

So, I’m not going anywhere. I’m only just over a year in. I still truly believe this will make me a millionaire. But only time will tell.

So for reference, I started plotting last fall and gradually built up a (very) modest farm of three HD’s, two 14’s and a 16. I’ve earned 2 chia pooling with this little farm and have purchased 4 more as the price has fallen.

I’m not sure if we’re just in a major pullback…kinda like BTC 5-6 years ago…or if this whole thing is just going to flounder and then die. What are the odds that XCH will be “the one” compared to the hundreds of other crypto options out there? Will XCH actually become something anybody can actually use?

Obviously I hope this pans out for all of us but even if it doesn’t…well I’ve learned a few things. I don’t have the guts to go in big like some of you guys but it’s been fun being part of it.

Timing difference is very visible here. I had 26XCH when I finished plotting my small 90TiB farm. Sold just enough XCH to cover HW cost. I don’t remember which month it was… Started a few days before mainnet, with a slow plotter.

I have won a few more XCH after that, but haven’t bought more drives. Just happily farming solo. Monitoring says no skipped SPs and average lookup time is 0.11s.

The other annoying thing, I’d been reading about Chia for months beforehand - this new craze taking China by storm kept popping up on my phone, only wish I’d got in sooner. Flip side is I probably would have kept the XCH and landed myself with a huge tax bill of wins in the early days. Those first two coins will cost me £232 in tax!