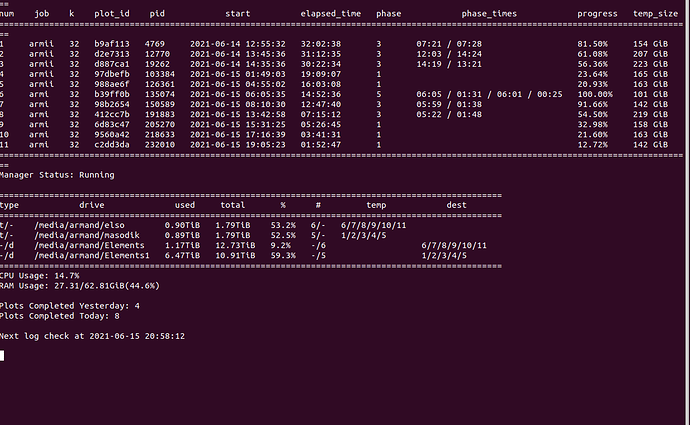 You should get 12 plots every so often, say, 7-10 hrs depending on quality of your ssd and final destination speed of writing

This kind of slow is not caused by your potting settings, this indicated system setup or hardware problems.

90 min delay means you limit total plots/day, plus not using your fine system to it’s fullest. You didn’t say what ssds you have, that could be ur only limiting factor here.

Don’t know those two SSDs specifically. U prop no this but a way to get an idea is… do a quick check on the write cache. Copy a 101GB .plot file from one ssd to the other while watching the MB/s in task mgr or copy itself (Win). Chances are most SSDs can read 101GB without slowing. Do the copy to the other and see if it can make it writing wo/slowing. Reverse.

Your ssds might be here: Consumer Archives | StorageReview.com Some Some fun reads!

I am almost positive that your performance issue is due to your choices of NVMe SSDs.

Information on the make-up of their internal NAND cells is hard to find. But as best that I can tell, both of them are consumer, entry-level SSDs, that employ QLC NANDs, which are the slowest and least expensive verity of NAND fabric.

QLC packs more data into the same amount of space, and does so at the cost of speed (mostly on the writing end, which Chia uses, extensively), and at the cost of endurance.

All SSDs advertise super-fast speeds, because their advertisements are all based on their small percentage of very fast cache. Most people never come close to exceeding the cache, so the SSD always seems super fast. But Chia is not a typical-use application, and quickly exceeds the cache, resulting in hitting the true, native, slow speed of the SSD.

The cache will probably be made from SLC or MLC cells, and will probably be between 25GB to 100GB, depending on the SSDs capacity. This information is nowhere to be found. Usually the only way to obtain the specifics is to run benchmarks on the SSDs. But too many web sites advertise benchmarks that never exceed the built-in cache, which makes those results meaningless for Chia (because Chia quickly exceeds the SSDs cache).

Benchmarks would need to be run using 500GB, or more, of writing data, non-stop.

What they use at google, facebook, microsoft, etc, are data-center and enterprise level SSDs, that are faster, still (and also more durable), never slow down, are expensive, and harder to find.

i updated my bios and set the stagger to 25 min and i think its ok, or not? 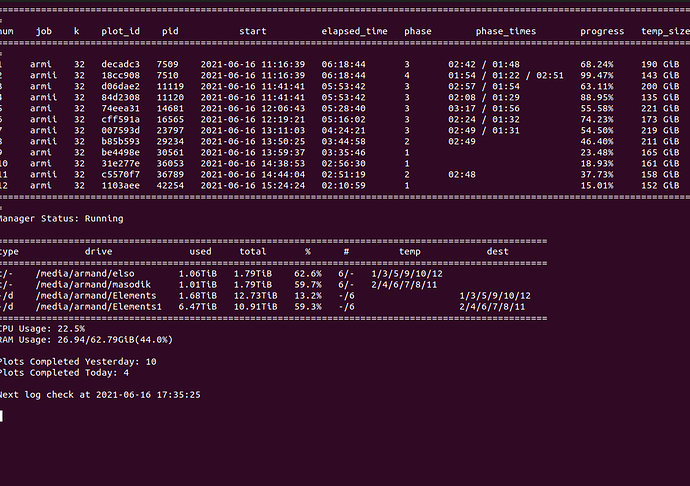 Sure looks a lot better than the first screenshot

Thank u all for the fast help! I appreciate it! Good luck!