A lot of fake pools out there?

Noticed how a bunch of new pools showed up on: Chia (XCH) PoST | Mining Pools

Tons of space, no blocks found?

And their websites are more or less clones of each other.

They have almost 4 000 famers, but taking a look at their Discord only show 2 members: 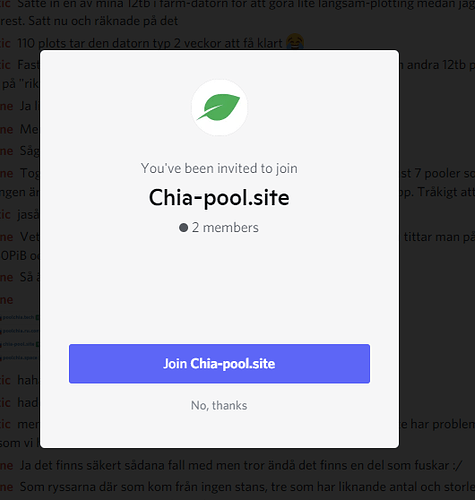 Yes. A lot of pools out there are faking their stats to attract more people

Many say to have several PiB but have not actually won a block in a long time.

I’m not saying they aren’t fake. But you have to remember that what you see on that site is what is reported by the pool api. Those pool sites don’t know everything. Only what they are told. It could just be a matter of the pool api is just not complete yet.

But most likely fake pools.

Those are the most obvious but there are also a few with tens of PiB or more that are consistently farming blocks well below the expected rate. Pools that should be farming dozens of blocks on a regular basis and only get one or two each day… Maybe 10 or 20 times less than would be expected. Bad luck can happen temporarily but this is just not believable.

Yeah, ive noticed them as well. At least most are easy to spot. But I hope people are careful when deciding which pool to join…

Yeah, we should be careful cuz as I know it’s not that hard to cheat for pool admins. Like I’ve joined a few not that big pools with 0% fees and have not been disappointed so far (chiahub, findchia, azpool). I think I will choose only one of them and I already have a favourite one but dunno for now

wdym? You think az is my fav or what?

Reducing your choices from 3 to 2

Where do you get these numbers from? They’re wrong.

XCHPool is probably too small to look at for a single run of 1000 blocks - would need to look at a bigger sample size to draw any kind of conclusions.

Seems like here were added some numbers (before it didn’t show many of these)
https://miningpoolstats.stream/chia

But it’s the first time I’ve seen it this low. Sooner thinking a API or calculation error. So many ppl in spacepool, If the payout is bad Reddit will explode. (maybe it is, havnt looked

Eh, wouldn’t trust that resource particularly. Most pools have a list of blocks won, you can go look at them directly, that’s what they are actually paying out on.

In any case, even with big pools, I wouldn’t expect exactly the % of blocks to netspace over a small sample, that is it’s highly unlikely that in a sample of 1000 blocks the distribution will be exactly the space distribution (for the same reason it’s not guaranteed that you flip exactly 50% heads/tails in a short run).

yeah, ssry, I just saw the heading of the article and didnt open it, srry again!!

We are FindChia pool and we always try to make everything clear and comfortable for others, so you can easily check our stats and be sure that it’s the truth and we’re not cheating!

Also when we were not catching blocks, we still made airdrops and paid our users around 1.5 times more than it was shown in the official calculator for that amount of blocks! And it’s important to mention that we work only with official protocol so it’s impossible to cheat!

Plus you can get 0% lifetime fees for joining us till the end of the summer, so we’re waiting for you!

If there are any questions you can freely ask them here😎