FlexFarmer aims to make farming Chia as easy as crypto mining through rewriting and optimizing the entire farming process in Golang replacing the standard harvester+farmer. It connects farmers to our hosted nodes over a blockchain bridge gateway which runs on powerful infrastructure hosted by Flexpool.io.

During testing Flexfarmer was found to work on a RPi 3 needing less than 100 MB of RAM and uses up a small percentage of the CPU (less than 1%). It thus allows farming to work on almost all devices using minimum power. FlexFarmer better identifies plots and errors allowing for a smooth worry-free farming experience. FlexFarmer will increase farmers profits through reducing errors, stales, power use, and increasing reliability.

FlexFarmer currently only works on Flexpool’s Chia pool and charges 0 fee. FlexFarmer supports Windows, Linux, and has a docker image. We also plan to have a macOS build soon as well.

FlexFarmer is currently in open beta. It runs on Linux and has a docker image. Instructions on how to run it are inside the download archive; please join our discord for any questions or technical support. Windows builds are coming soon closer to official release.

Docker image: flexpool/flexfarmer (instructions on using it can be found in the regular download archive)

Run flexfarmer and farm chia on hive os using the following guide created by nekusul: run it at startup as a systemd service on HiveOS, here are the steps: GitHub - F1DNA/FlexFarmerAsAService: Run FlexFarmer as a service - written for Ubuntu Server

Verifying legitimacy of the downloaded software:

All our download archives are signed by our FlexFarmer Code Signing GPG key located at https://static.flexpool.io/dl/flexfarmer/gpg. The software signatures are available at .sig

Note: Interactive guide on our website is coming soon. Please visit our discord for any support or questions/comments. Thank you to our Alpha testers for their feedback and suggestions. 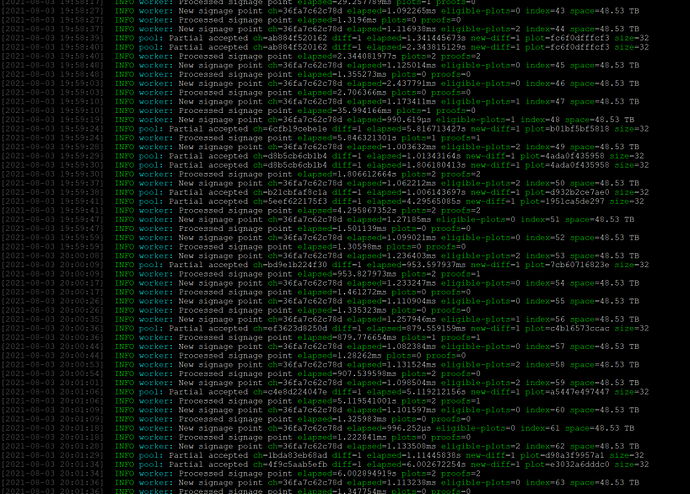 Now we are going “off” the official path. There maybe complications?

Not to my knowledge, its a healthy baby

Regarding the “much more stable” claim, does this mean that the hosted nodes are achieving 100% unskipped and ordered signage point perfection?

And will this often ignored yet important metric be made public, unlike with OG pools?

Can’t guarantee this, they are doing better due to being on better hardware but network issues have affected us before. You could ask Alex on our discord for a copy of the logs when issues pop up on the network and for a more technical discussion.

Core Pool of the NFT plots!

So you’re releasing a closed-source client? Welcome to the dark side of Chia pooling.

Just kidding. We’re actually able to do a lot more client-side verification than the Official Pooling Protocol if say someone did find an exploit.

I remember seeing mention of your team working on a GoChia node. Is that still in the works to be made public?

If not, I wouldn’t be mad. Keep doing your thing @Chris22.

It’s better than seeing you complain about the price of XCH or that nobody wants to support the Official Protocol because they straight up didn’t offer their users any benefit.

Only if you don’t consider replotting a complication.

I remember seeing mention of your team working on a GoChia node. Is that still in the works to be made public?

Thanks for the support.

Yes but so far no one has agreed to offer funding so I’m not sure if we will open source it or finish it, most of the work was done as part of the pool. I believe we have the first and only full featured Chia wallet.

The problem is that we really do want to open source things and help the community…but someone needs to pay to keep the lights on. If farmers want to get together to donate to a fund to pay our bills we can open source our work, or if Chia themselves want to we can. But if no one’s funding then we’re forced to compete with other pools which means advantageous software remains closed source.

Exactly brother. We’re in the same situation. It’s not realistic to think that you can just ‘set and forget’ with the Official Pooling Protocol.

Oh wait! That’s just like every other corporation where the people that don’t do **** all get most of the reward for being slimy.

If the Official Chia Team commits more than 50% of the prefarm toward developers I take back what I said.

Since no need any Chia app, no full node, no sync, only a farmer and plots, where goes the 0.25 XCH?

To the wallet address you set.

Disclaimer: I’ve been testing flexfarmer as part of their closed alpha program. I don’t get anything in return for it, and I’m not receiving rewards for posting anything on their behalf. These thoughts are my own.

I’ve been pretty impressed with the software they’ve created and the people behind it are pretty genuine guys. I’ve been making suggestions and giving feedback and they respond positively, and integrate ideas into their code, and or address my concerns.

Mostly, I’ve been testing it as a small Pi farmer. The fact that you don’t need to run a full node or download the blockchain for farming is a boon for small devices like the Raspberry Pi. Most of all, the resources it uses is minimal but the connectivity between the farmer and the pool is pretty damn impressive. 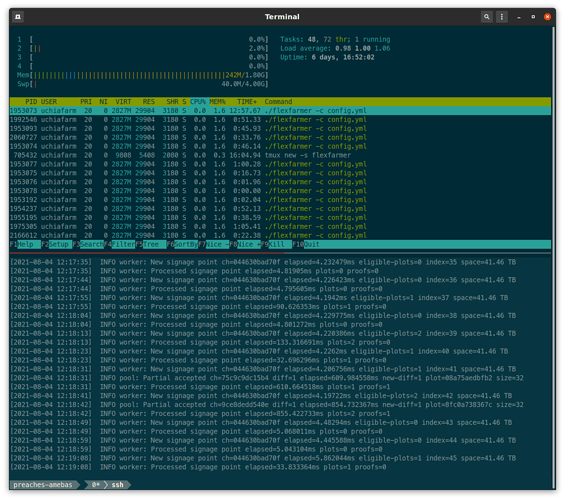 I mean it just sips resources on my 2GB Pi 4.

There are still times when you need to download the blockchain for managing your plotnfts and wallet. Or if you plan to run full node no matter what then this probably isn’t for you. But I do think this is a big step forward for Chia farming in general. No more worrying about sync problems! I mean that’s kinda huge.

I hope that someday more pools will develop this kind of lightweight software that will run on old laptops, underpowered VMs, and low-powered IoT devices like the Pi.

Of course, the biggest downside is that you’ll have to switch from your current favourite pool to flexpool. But the experience so far hasn’t been a bad one. My one and only gripe, is that the payout threshold is 0.1 instead of 0.01 (like spacepool). But that just means I’m getting a payout every 10 days instead of once a day.

But seriously, if any of you want to try it out it is worth a shot. I’m sure they would appreciate your feedback as part of their beta program. They’re always looking for ways to improve flexfarmer for users like us.

For those of you who are just curious, make a new ploftnft, create a few plots, join flexpool, and try out their new software. You’ll have a pretty good idea of what they’re about and then you can make a more informed decision about whether or not flexfarmer is for you.

Any concerns or why you don’t plan on trying it, let Chris know. I’m sure he would appreciate the feedback from this community.

There is some real work (different than the rest), keep going!

There is some real work (different than the rest), keep going!

Thanks! And someone created a guide to get it working on Hive OS which is pretty awesome. Mine ETH and Farm Chia on one rig!

Umm, swimmingly is the word for it? I’ll add more to it (if all goes well in a few days).
The configured farmer folder is zipped and saved, “You may hope that I’ll be lazy to change things”. 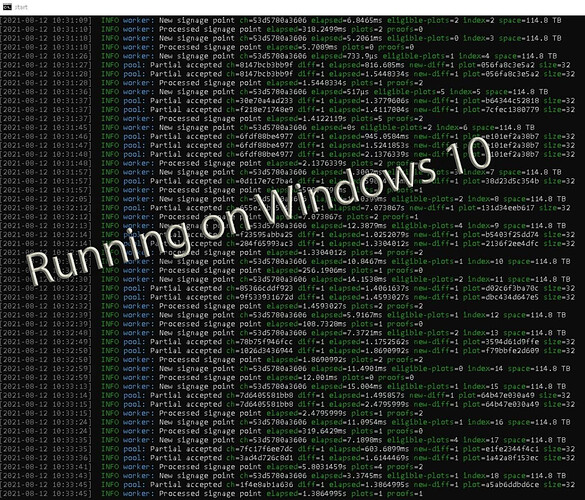 Ever think of creating a Docker for this? I run most of my plots off an unraid server and a docker would be the bee knees…

Ever think of creating a Docker for this? I run most of my plots off an unraid server and a docker would be the bee knees…

Funnily enough I am running an unraid docker of this…

It’s not an official docker, more like one I janked together with their docker image.