Anyone in UK (or other hot) regions shutting down farms in heatwave?

I know there is no right or wrong answer to this but curious the hear what others do!

Anyone have an ambient room temp they shut down the farm?

I farm in my garage where temps usually about 3-4 degrees above temp in rest of house. All drives actively cooled but I’m nervous over next few days.

Hottest temp I’ve had on a drive was 44C (110F) in recent days. I monitor with CrystalDisk & have email notifications above 50C

I switch off whenever the house is hotter than I want, so I switched off for the summer. I still have a pi4 with 60TB running tho

We have some farmers in our pool that also used to switch off completely during hot days. The hassle of shutting on and off, and then waiting some more for the blockchain to sync felt not worth it to some.
About a month ago, we introduced our SpaceFarmer Community Node, which allows you to farm through a remote node with instant sync.

It was originally designed for solar farmers and small farmers, but it also works well for those farmers that want to farm only during the cooler nights, and shut down during hot days. We even have a 1PB+ farmer who fully automated the process of keeping his room temperature under 30C using smart switches and Home Assistant.
Maybe this solution may work for you, too?

Probably won’t bother, it’ll be over in a few days.

All my drives are forced air cooled anyway.

Taking my chances. Ambient 38+ here in Texas for almost a month now. Similar situation in the garage, but I work around it by forcing air from above the rack to outside through a 740cfm fan and a duct.
When humidity is low (about 30%) i turn on evaporative cooler directed at the air intakes, which theoretically lowers temps by a few degrees

We’re not well prepared for temps this high in the UK. Unless on holiday

Currently plotting an 18TB USB drive, just checked the max temperature and it was 46c, it does have a fan sat on top drawing air through.

Getting a little concerned about one on my server, transferring data from an internal 12TB (max 39c) to a USB 18TB, which is running at 52c, its actually dropped to 51c now. Most my drives are in the high 30’s or low 40’s, all have fan cooling, even the USB ones. The server is in quite a small room with no windows, so does tend to get warm in there.

Not the best time to be transferring data or plotting, but temps are not too bad, ambient outside today was 35c, thermostat in the plotting room say 30c

Farm seems to have survived & actually fared well - ambient temperature in garage of 41 degrees but no drive got above 45.

Active cooling seems to be working.

Switched off yesterday, bedroom was 32.8 C…slept in the living room and the farm was making too much noise. Left it off today as it will be the hottest day yet.

The 49 and 50 are NVME drives, the 52 doesn’t have the best cooling and I’ve run out of fans at the moment. 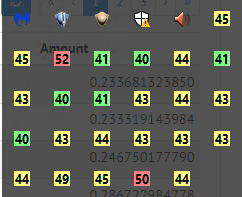 In a separate room, and a different PC I Started Bladebit going earlier, forgot it was more punishing than Madmax, only three plots to go though, so will be done soon enough.

This is the rear CPU in a dual 18 core system, the other cpu ranges between 59 and 64c 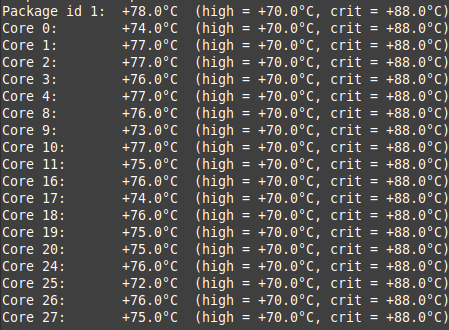 Once that finishes plotting I can take the fan and drive off that and use it on the server.

Hope everyone survived the heatwave.

Likewise, I had to stop plotting on my NVME drives for the duration but the full node & harvesters seemed OK.

Will have to look at better cooling for my NVME though both have an associated heatsink. Relatively limited space inside my case & unfortunately the NVME is under the GPU which doesn’t help!

Moving most equipment to the basement i.e., ‘earth conditioning’ for the drives

Shut down? No way!

I have two NVME drives on the motherboard, both with heat sinks, but the case is quite cramped with a 10Gb network card , HBA and SAS expander which both have 40mm fans on. Plenty of air flow through the case, but with 16 drives up front the air is quite warm. The room is small with only a door, so it gets warm in there, so given all that the temperatures aren’t too bad.