Bram Cohen has made some predictions on his Twitter this month so let’s keep track of it.

Netspace rise is hard to predict as it depends on confidence in the Chia Project which is somewhat less today than it was two months ago. It’s clear that certainly in the short to medium term, Chia is more suited to farming that little bit of spare hard drive space you have at home, or at work than investing a lot of money in equipment (I still invested some). Long term is anyone’s guess though we all know which direction we want it to go. It’s plausible that netspace might hit 100 exabytes but I wouldn’t say likely based on this graph.

Which shows netspace rise having an S curve which is now flattening off, and slowing, maybe even has stopped temporarily. I suspect many are overwriting their OG plots with poolable plots instead of adding more space. So once this period is over we might see a change in trajectory again and another steeper rise.

I think official pools will take over from unofficial pools. Offical pools have none of the following issues:
-Private key security being the number one concern
-Cheating, meaning that rewards are lower than expected because the blockchain isn’t awarding more rewards, but the pools are being tricked into thinking some members have more space than they actually have
-Fees are much higher in general so you get less rewards for your farmed space

Add all that together and its only the fact that unofficial pools have so far been farming OG plots, and therefore people in them are now having to replot to join official pools.

Keep tabs on it all here:

What you seen this week is flat-line for past month on XCH at 30EB, but the clones moving towards 10EB;

If this continues the total EB of the chia&clones could be 100EB, why would Bram Care, he dictates the pool-protocol, thus he owns the space whether it flys the xch flag or not, I would even go to add that chia-net may have been involved in some of the clones to get the space moving again.

The log growth of chia(xch) flat-lined on june 21, almost a month ago; If not for the clones chia would now be negative growth.

(2) This is an out-right lie & more FUD, Dis-Info…, HPOOL had 90% of wins, went to 80% now back at 85% of total pool space; U want to win, u go to the pool that wins block every few minutes, they share the wins; U go to a pool like ‘space-pool’ where they win a few blocks a week, your going to win zero, just like u did before. While you were all 'waiting for official pools, well now u have them, and nobody uses them. In fact it can be said that for the entire pool space less than 1% are using the new pool protocol, of course this is largely because its still in beta-test and will stay there for a long-long time.

https://miningpoolstats.stream/chia
pool stat’s for all hdd miners on planet earth

‘Official Pools’ is just a pretty word for NFT pools, was ‘portable plot pools’ that just came out this week, e.g. the semi-working draft in beta; Given that the new protocol is not clone friendly that they must all create new clones to support the new protocol, means it will even take longer for them to come out with NFT support.

…
Some here will try to argue that total space is the measurement, but its not; SOLO is out of the question at 30EB, that means you must have 30K Plots ( $100K USD of HDDS ) just to play the game; Solo is only for BIG-TIME operations; SO that leave 50% solo, and 50% to the pools, of which HPOOL owns 85% of the pools;
I’m just point this out because 99% of the ppl on this forum, are not part of the $1M HDD club; This is a very small group of people mostly in Asia that are solo-mining, and winning the 1/2 that HPOOL isnt’.

Yep which is why I think the Chia project is an entitlement project for Bram Cohen who wants to milk it all. If money isn’t important why premine 21m and why get angry when he doesn’t get his money in time from escrow when he sold BitTorrent to Tron. Be warned Bram is very two faced and he will pull the rug on all of us who are supporting him and his project without a 2nd thought. Only reason many people still in is because of the Forks now.

Netspace rise is hard to predict as it depends on confidence in the Chia Project which is somewhat less today than it was two months ago. It’s clear that certainly in the short to medium term, Chia is more suited to farming that little bit of spare hard drive space you have at home, or at work than investing a lot of money in equipment (I still invested some). Long term is anyone’s guess though we all know which direction we want it to go. It’s plausible that netspace might hit 100 exabytes but I wouldn’t say likely based on this graph. 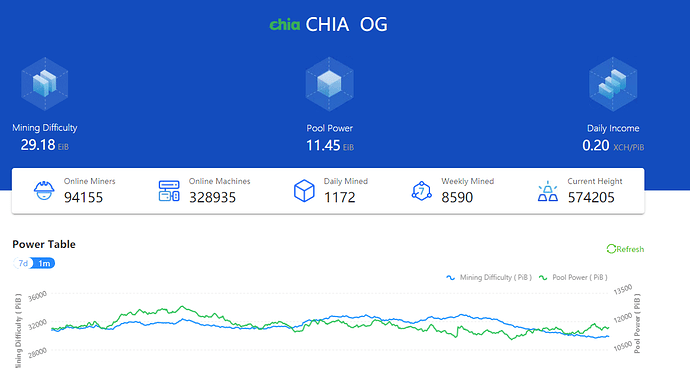 Thanks for telling me I’m not “in the game” while I solo farm my 330 TB and get rewards monthly, I wouldn’t have known.

You can’t base it purely on what they have won for last 12 or 24 hours and say that is their netspace.
Due to the nature of the winning a block, you can 50% of the netspace and have days where you are above and days below.

Look at the time to win. There is a caveat, you may take 3 to 4 times longer.
Also if you look at Pool.space they have a luck factor as well.

Then you can check it daily, and you will see that this is mostly the case as for Hpool it is big numbers.
I’ve been checking these things for weeks. you can also check with the calculator and many posts about it.

None of this is news right? Hpool can’t handle all the cheaters, so they think their netspace is bigger than it actually is, THUS they distribute the rewards too thinly since they are spread over fake plots.

2: No brainer, of course they will, just a question of how fast. Despite some nonsense people are spouting here, those old pools are done for, they know it and are already switching over to the new protocol.

Only a few ppl not wanting to replot are going to stay there with those pools as long as they stay open.
I had 190 TiB in Hpool, will all be gone there in 2-3 weeks.

Any new pool who can reach stable daily block wins, is basically viable, so at the moment that would be 3-5 PiB or more I suppose. Bit bigger will get you better stability and future proofing though.

And somemoar, thanks for telling me too while I solo farm 110TiB and get rewards monthly, that solo farming is “out of the question at 30EB, that means you must have 30K Plots ( $100K USD of HDDS ) just to play the game”.

I’m not promoting HPool, but they will also launch official pooling as well.
So at the end of the day I wouldn’t say they are dead.

Got to remember there is significant effort and time required to replot and this is certainly not something everyone wants to do if the OG are still supported.

In regards to cheating, I think this is not a Hpool issue but rather dodgy farmers, can’t really blame Hpool for that.

At the end of the day where there is money they are scammers, cheaters and liars. This is the beauty of money.

Probably not? But I bought some fun hardware, learned cool tech stuff. Contributed to chia-blockchain, chiapos, chiadog… And I’m making some money along the way.

If I hadn’t been scammed by a user on here, I’d be in the black at this point

Sorry for your loss, that sucks. Glad you are making some money now anyway

Oh yeah. Forgot about seeing that. You got shafted by someone “selling” drives, right? So frustrating.

Yeah, sold XCH to USDT and paid it all up front

Stupid, should have used escrow or a little more due diligence.

Post 100PB I always move to pools. Right now to get a daily win you must have 30K plots.

They handled the cheaters just fine, on their last shutdown they wiped out 20% of their fake-plots;

Now the new pools are just starting to see the scam big-time; That a huge percentage of all plots are fake. Like all things ‘chia’ the security for fake-plots is wide open for theft.

HPOOL largely solved the problem by banning Russian&USA IP’s and closing new accounts; The chinese whales were already there, who make up the majority of hpool; The newbs were mostly trolls & fake-accounts setup by antagonists to destroy HPOOL;

Here in Asia the HDD have been off the shelves and non-available since April, that’s when HPOOL started supporting the whales;

Today the biggest western pool is like 300PB, and HPOOL has +12EB; They actually make up all the chinese pools, which is close to 15EB; 300PB is 2.5% of the wins that HPOOL see’s. WINNING yep right.