Chia gain is too low

Some entries from log files are:
pre_validate_spendbundle 1.1 to 1.7s
Block validation time 2 to 10s
plots were eligible for farming 3 to 6, time up to 0.5s, Found 0 proofs almost always

What should I look in to?

If you have NFT plots farming solo you could join a pool, if only for a little while if you prefer solo farming.
That way you’ll get feedback from the pool allowing you to determine if the number of partials found are in line with your plotted space. Partials are far more frequent than actual proofs but if the partials are in line, so should be you chance of solo winning a block.
That said, it is a game of chance and the 7.4 wins per month are on average. Actual wins may vary 3 to 4 times higher and lower.
I’m on 3500 plots, statistically expecting a win every three weeks, but currently 4 months without…

If you’re on OG plots there are a few things to check, the log entries you included don’t look strange, but more can be found at https://github.com/Chia-Network/chia-blockchain/wiki/How-to-Check-If-Everything-is-Working-(or-Not)

@ xkredr59 thanks for the reply.

I’m using OG plots. I have almost no errors in logs. All the warning messages I get I checked on google and they are normal.

I would like to hear more people share their OG plots count VS wins for past several months or any links to posts with similar topic.

I know what statistics is and that it is theoretically possible to never win anything with lots of plots or the opposite, you could win lots with just one plot, but still.

My brother has roughly 1300 plots, his time to win is two months, took him four months to win his second block, which he found last week.

You could join https://chia-og.foxypool.io/ I’ve been with them since July, so have regular bits of Chia coming in. I have 1283 plots, also two months ETW, and am now a month overdue.

In the ‘old’ days this guy jm (who is now vp of storage at chia) did a video on youtube and an article on chiadecentral.com on the statistical side of farming. And presented a spreadsheet model to do your own math.
He also talks about the chance things are not as they should be and some of the reasons thereof.
One thing came to my mind when revisiting the video, how’s your network configured. Do you port-forward manually in your router or have upnp enabled? Or both? Check the video and model, links below (the spreadsheet model is in the second).

Lousy audio as usual with jm, but his content is pretty knowledgable;-)

He also talks about the chance things are not as they should be and some of the reasons thereof.

Mmmm, with that model my chances of winning zero blocks in 4 months, with current netspace and my 360TB are close to zero… an indication (nothing more than that) that something may be wrong…
Space Pool recognized my farm as ~360TB on average though, so for now I’ll just think I’m very unlucky (at chia;-)

I finally gave up on solo and I’m pooling now. I won a couple of months in then nothing for over 4 months. I’m unsure how the big farms / whales are gaming this but it really seems like they are and the Chia Devs aren’t interested in fixing it. I honestly sometimes feel like they’re just waiting to get it listed on the exchanges so they can bail. Almost like a long play pump and dump scam.

I have checked my chances of winning 0 blocks per month is 3%, three months in a row chances for winning 3 blocks are 0.

I suspect there is something not working right with the Chia in general but I don’t want to make any conclusions, hence I’m asking questions here.

(several farmers and one harvester/farmer, no plotters)

Are these on the same network? How do you separate them and direct ports? Thought there should be only 1 farmer/network w/8444 directed towards that IP on a network?

There’s usually an answer for everything, the difficulty is finding it. Do you use ‘farmer’ for checking farm health? That helps a lot to see areas where there are problems whether developing or systemic, even if they are fleeting or intermittent. 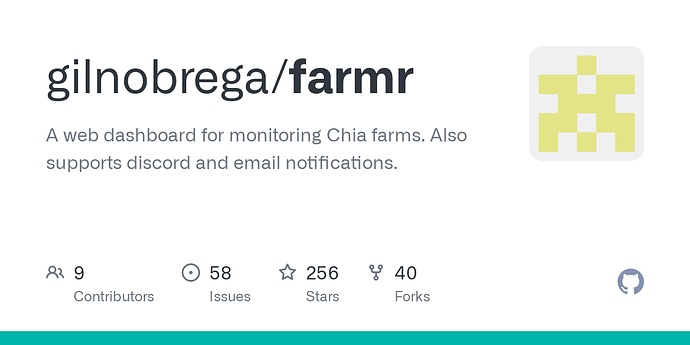 I have one farmer and multiple harvesters, I mixed the names, had to check Chia Network Architecture to make sure I’m not mixing terms.

My plot ratio is approximately on average 0.9

Are there any other parameters I should look in to?

For a quick look at that tool, it’s fairly minimal and more on realtime stats, but I could be wrong. I would install farmr and see what you learn anyway. What do you have to lose?

I don’t really get that pump and dump vibe here. In fact, quite the opposite. What makes you think that???

The significant amount of Chia pre-farmed by the Devs. The Devs saying originally and to this day that they are concerned about the fair distribution of farming but actions or lack thereof clearly demonstrating the opposite. In other words, they show no interest in fixing the 4 or 5 accounts that are whales locking everyone else out of farming. For what they originally promoted in that ‘anyone’ could plot and farm on the spare space on their personal computer wasn’t true when they said it. Admitting they made a mistake and can’t fix it would be better than just letting it go on and on. For me, pooling is the only option even with 300TB of space. At that level I should be a whale, but that much space was necessary to even play the game when I started.

admin.monkey … 300tb is hardly a whale, maybe a shark… I’ve a bit more than that, and consider I’m only normal size for an individual farmer, nothing special. However, with careful farm management I’ve gotten exactly what statistically I was told I would get with the OG plots + self-pool plots I have.

Aren’t you seeing conspiracies where there are none because of your winnings (or lack of)? Real whales aren’t locking anyone out of anything. Winning is just just the math and meticulous farm management.

You should not be a whale with 300TB man. That’s like 5 grand in storage. Imo that would not equal a whale. I have 600 and I don’t consider myself a whale by any means. I’m a normal dude with a 9 to 5…

Let’s say the 4 or 5 biggest farms didn’t exist. Then we’d both be whales. The common farmer should be able to win off their personal computer as originally presented by the Chia Devs. I’m a normal dude with a 9 to 9 too. (IT workers don’t get an 8 hour day anywhere on the planet

Let’s say the real whales of today didn’t exist. Let’s say the Chia Team fixed the issue somehow to make it fair for someone with just their personal computer to win just as originally stated. How would we then be measured?

Real whales are locking everyone else out. They have a statistical advantage from having more plots to farm. That’s the actual math. They’re locking out the people with personal computers trying to farm, the people who’ll never win because the whales exist.

I’m not trying to present conspiracy theories, just plain factual information. We do have a problem with Chia and it’s been openly discussed by many before me. We’re concerned about the reliability and stability of the coin. Having so much in the hands of so few isn’t the mantra of crypto and it easily risks the project.

I see your point in the current situation, but I’m talking about what was originally presented by the Chia Team. That anyone could farm from their personal computer. Well, since they didn’t and haven’t fixed that then the whole project is in an unfair situation.

Lol. I wish I had an IT job!!! I’m a chassis mechanic. I live in one of the busiest port towns in the US! Repair shipping containers and chassis. About the top farmers. Same could be said for any proof of work blockchain really. I just don’t think my investment should constitute being a whale.

Hey, regarding your being a chassis mechanic. I used to work as a tradesman on diesel locomotives. I think I still have some of that truck ‘grease’ on me from 30 years ago.

Seriously though, thank you for the work you do. You’re one of the folks keeping the world turning.

I really hope there is something I’m missing and not a general problem with Chia.

Since day one, our Chia wins are less than half of the calculated values even when using that nice excel spreadsheet.

Even if there is a technical issue it should not be that difficult to figure out from log files in worst case but it should be obvious from user interface!

Regarding whales, statistically regardless of how big they are they should not prevent others from winning their statistical chances but rather get more percentage. I’m sure that by studying numbers we could determine if they have unfair advantage. If I don’t get what I want here and start wining I’ll invest some time in to that for sure because we need to know.

Pools are nice, but they take percentage for them selves and that is OK if you have few plots, for bigger ones it would be a loss over longer periods of time.