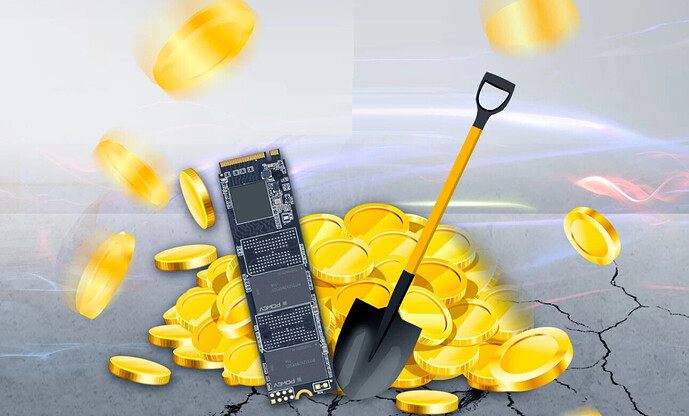 Chinese storage makers have commenced production of dedicated cryptocurrency mining SSDs after the rise in popularity of Chia Coin.

Any theories on what could even be going on here, beyond just marketing high TBW drives at a specific niche to capitalize on a trend?

I’d have to say 80% marketing, since I could think of a lot of different ways to try and spin these drives for the miners.

The article doesn’t point in this direction, but the only specialized piece of hardware I can think of would be some kind of ultra low cost ultra low endurance SSD that you could fabricate from rejected/defective flash chips.

Create drives that are unreliable, have no endurance, but can hold onto a plot and cost nothing compared to reliable consumer grade equivalents.

Didn’t even consider that, but that is definitely interesting. Considering the farming process is basically write once then nearly read only afterwards, it almost functions like a ROM chip in a way (there’s still a little bit of writing once the plots are there I know).

Very likely it’s just hype though too. Early May is going to be wild

People new to Chia don’t quite grasp how big and mature the SSD and HDD market is. 1.2 Zettabytes of hard drives are projected to ship in 2021. The Chia netspace would need to eclipse 12 EB of brand new hard drives to take even a 1% share of this market. That total does not include the likely large over-provisioned hard drive space that is already out there which we expect will find its way to Chia once a coin price is set.

Yes, there may be some temporary supply chain shortage as run-rate inventory is snatched up and yes, people may incorrectly use a consumer grade, low TBW SSD for temp storage. However, in the scope of the entire Drive market that ships 100’s of million of units a year, Chia farming will likely only make up a tiny percentage of this spend. A hard drive isn’t a single purpose piece of hardware. They have utility outside of farming Chia. Storage requirements continue to increase every year, so at worst you’re paying a premium for something you can use for 5+ years. The “write once, read many” workload on the drives is such a low workload that it won’t hurt the expected lifespan.

I read “The Chia netspace would need to eclipse 12 EB of brand new hard drives to take even a 1% share of this market” and took away the opposite conclusion. Filecoin is already at multiple EB capacity, and Chia looks on track to get there by summer latest. Haven’t we all, this past year, had a hard lesson in exponential growth + network effects? So I don’t have a hard time imagining “this thing of ours” developing into a meaningful segment of the drive market, say in 12-18 months timeframe. I wouldn’t say that’s probably going to happen, but I see some percentage chance.

Nvidia’s most recent 10-K mentions cryptocurrency eleven times; Seagate + Western Digital + Micron, zero. Smells to me like some significant, unexpected upside potential for those companies. (Again, in expectation; the mode is, this fizzles