Congrats! NFT1 release! What do you think of it?

I felt like it was the right thing to do - to make the first post here about our thoughts on this update.

On the one hand, it built different and seems promising (literally there is no way you can lose your NFT, unless the blockchain dies), on the other hand, it’s new and we don’t know how it will prove itself yet.

Really eager to know what you think of it!

I think it’s the biggest thing for Chia yet. If getting exposure and “on the radar” is important. I have no opinion on NFT technology because I don’t know enough about it yet. I see NFT1 as a conduit. It’s creating vast discussion and exposure on social media and on websites. It seems that Chia came out guns a blazing whereas other NFT platforms haven’t seen this type of instant impact. Maybe it’s my social feeds. Not sure. The Chia solution appears to be a game changer though. Nothing previously moved the needle for Chia. This has. In a way it has solidified my hopes that Chia will have staying power and that it’s not just built on promises. Chia has some excitement around it which is something you haven’t been able to say. A few people talking about Chia isn’t going to increase XCH value. This NFT1 launch very well could. But for me, this has solidified my belief in Chia and gives me a lot more confidence that my investment in hardware has been worthwhile. I still have my bubble wrap though for selling hardware. I’m more confident, but I’m not at the point of signed, sealed and delivered.

I’m more confident, but I’m not at the point of signed, sealed and delivered.

And, yeah, it has already impacted everyone’s belief in project. Hope it keeps growing, so that no one would think of whether chia is a good investment or not - they would already know it for sure ^ _ ^

After all, Chia currently processes about 30 transactions per second (TPS), while Solana can range up into the thousands. Hoffman admitted that some kind of layer-2 scaling solution would be necessary to handle NFT mints at a faster rate than Chia’s TPS mark currently allows.

Again, doesnt look like something to go skyrocket but to stay rocksolid. Great. But no Lambo in sight.

I like it and think it will be a draw to the community for new people. I put up a small collection of photography NFTs using SkyNFT and they all sold in less than a day. I am planning a bigger photography collection that I will mint myself from the CLI. I’ve also been buying a few NFTs from others to keep for myself too.

Maybe if you had time you could post back on the experience of using skyNft?

First of all, It seems to me the release went very smoothly.
1.4 out and I haven’t seen much support questions popping up anywhere. I’d say that’s a good development.

Personally I don’t care much about NFT’s as they are. People paying tons of money for silly little pictures, I don’t get it and I don’t want to get it. That’s a very personal opinion, and I don’t think any less of anyone who completely disagrees with that.

For Chia, it’s a very good thing. Major step in getting more adoption and more cash flow going. They seem to have taken great care in studying the current problems and offering a real benefit to those in this market.
NFT’s are at the moment key to getting an ecosystem going, so I think this is a job well done by the Chia team

Seems to be bringing users and enthusiasm which I feel like we need.

It wasn’t without its hiccups, but as I’m trying to work out minting on my own from the CLI, it’s certainly easier than that. Their site is actively being updated for enhancements & making it easier on users. The main problem I see is communication. Some of the ‘wording’ of items feels a little off for American English speakers. For instance, if you have created a collection of NFTs and you want to edit the details of that collection, you must go to ‘Create NFT’ in the menu system. Little things like that. It’s not super intuitive but, the ability is there if you dig around and play with it enough. One thing that got me was the royalties. I left them at the default of 3% and saw that SkyNFT was getting 2.5% but I mistakenly thought that meant 3% for me, 2.5% for them. But I ended up with 1/2% royalties. They also direct the royalties to a smart coin that distributes the royalties to the two addresses (yours and theirs) but it seems to only be once a day at the moment. Their discord is pretty active so I know they are updating and iterating quickly. Overall it wasn’t too bad, but I will probably try to do it myself in the future. But for anyone non-technical that isn’t going to be an option. There are other minting services coming soon too, I know. Mintgarden.io and NFTr.pro

Thank you very much for the info. Much appreciated.
Good to know about the royalty confusion

Just popping in to say thanks for kicking off this forum category with the first thread!

Personally I don’t care much about NFT’s as they are. People paying tons of money for silly little pictures, I don’t get it and I don’t want to get it. That’s a very personal opinion, and I don’t think any less of anyone who completely disagrees with that.

For Chia, it’s a very good thing. Major step in getting more adoption and more cash flow going. They seem to have taken great care in studying the current problems and offering a real benefit to those in this market.
NFT’s are at the moment key to getting an ecosystem going, so I think this is a job well done by the Chia team

I can see how NFT’s could be used for exclusive memberships to clubs, ways of showing support for an artist you like, or lots of things that haven’t been discovered yet. But ATM it’s more like pet rocks for rich people.

Still, there is a lot of hype and if XCH can be part of it it’s gotta be good for us. Thanks for making the new category 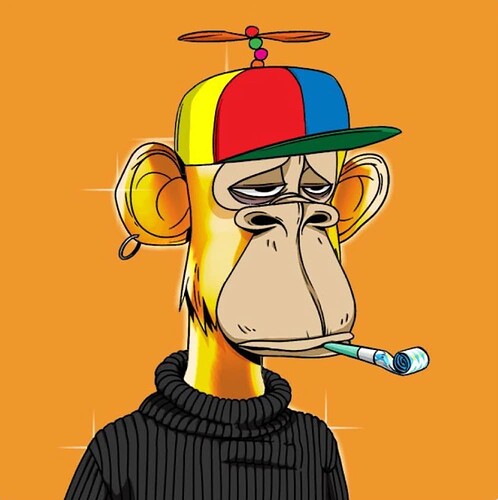 It was really funny. Made my day

XCH isn’t in comparatively a lot of hands, so the market is kinda thin. The chiafriends floor is about 3.5XCH now. I think there are a ton more projects than takers right now and that’s only going to explode as the sites with minting tools ramp up. A little price increase seems to have followed though, XCH at about $46 today.

When they say good things happen to good people, look no further than me. I’m happy to announce (at the top of my lungs) that I have indeed won a Chia Friend. This is karma at work. The world is as it should be. I won. I won, I won, I won. It took quite some time to show up, but I’ve been offline, then online a bit over the past week. I beat the spammers I guess. Who here is happy for me?

We all are!!! Sounds great

I believe the mandatory response to this is: