If im not terrebly mitaking and if we start from design only . We can make spacialed mother boards with dedicated lanes for for support maximum efficient ram hdd sdd cpu. But all i can say is it wont be that expansive to hire some one on the internet to design the pcb . It wont end in that but lets say thats a start we still need the knowlage to set the demands from the desighner . And im only talking about the design becuse its the first step . Well the first step is getting the right people in to pur knowlage on system requaerment. Any way i think its a good thing that a custum hardware will come to mind . I dont know what role the data giants take in developmant but i belive that small gruop with a side nish can progras faster.
To be fair im just starting to look at chia docs

Don’t get why you want to reinvent the wheel, so to speak. Buy a decent motherboard, put a chip, some ssds, and memory on it, and begin with Chia. Too simple.

If you want fancier than desktop, get a multi-cpu server or workstation, like a Threadripper… they’re already about as advanced as is possible. No engineering degree required.

What if we can write 3 ssds and bunch of hdd

That’s alreadys very doable…and useful - I use temp1 & temp2 nvmes to plot, with temp3 nvme as destination to put finished plots in quickly… before distributing them to multiple HDs.

Further, if you want, and have room to install another couple ssds, set up two parallel instances of plotting. So 2x2 nvmes plotting, one (or more) to receive the plots produced. Whatever pleases you

what 3 high speed connection ur sdd take ? do u know how much pcie lanes they use or even if they use non pcie lanes ,(if thair is any) how ur computer comunicate to the hdd ? thrugh pcie lanes ? how many hdd conection he can have and how many off them can run simustanly ? are pcie the only storage conection . u use sata hdd ? how much can be run at once ?

how much can be run at once ?

Here are some specs & a review you ask about for the workstation line I use. Read the whole review to answer more questions. It’s more than you need, everything you want. 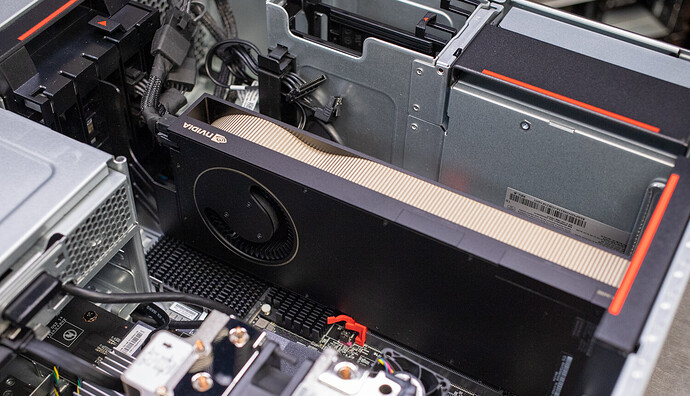 The refreshed Lenovo ThinkStation P620 has been updated with the most recent ThreadRipper Pro CPUs, including the powerful 5995WX.

From my understanding I think issue is transferring plots fast enough. Current hardware can do 5 minute plot but it takes over 10 to xfer to hdd.

Easily handled. Use a (relatively large) ssd to plot as final directory. Set auto moves from there to multiple hard drives from that pool. Also 10 min xfer sounds a bit long in my experience closer to 7, but it does not matter handled as described.

@dan_haviv what boards have you tried so far, and what specific shortcomings have you found? Or is this a non-solution in search of a non-problem? Or an attempt at a business case for a startup that isn’t really needed?

There are thousands of plotters/farmers out there who’ve solved the problem fairly effectively without having to discover firsthand that, in fact, inventing and mass producing a brand new motherboard isn’t cheap or simple (especially if you don’t know your way around computer systems).

My guess is your local online marketplace will have 8-to-24-bay 2.5" drive based servers available at various levels of inexpensiveness which could do sufficient plotting even without SSDs. Load them up with enterprise SATA SSDs and you’re cooking with gas. Throw a SAS card in and you have expanders and JBODs to store the farming plots.

You don’t need anything special for plotting.
Plotting is amenable to scale-out i.e. if you want to plot faster add another machine

If you haven’t watched it yet, check out JM’s plotting project - he takes the hardware to the theoretical limits Chia plotting - 1.26 petabytes, one JBOD, 2 weeks - YouTube. At the 10 minute 25 second mark in the video, the drives are writing at 4.1GBs a second (host bandwidth - SAS, divided among the lot of them). Cool stuff!

I don’t have a license to drive faster than that, you plotting lunatics can have at it. It’s fun to talk theory though.

P620 Threadrippers are single CPU. Mine came wo/GPU like this > Lenovo ThinkStation P620 Workstation: Ryzen Threadripper 3955WX, 16GB 512GB WiFi was and was $2300. I optioned it up with more memory, and bigger SSDs, plus a cheap GPU. I think the fancy GPU was ripped out at that time and sold separately as they were uber $$$ then. They dumped what was left on EBay for me to scoop up.

That was 18 months ago, and those 3000 series are not in production now, as it has been upgraded to the Threadripper 5000 series, and soon to the 7000 series.

Ok ithink we need main ssd and small smal cpus to transfer data to many hdd drives . And a main pcu unit

Ok ithink we need main ssd and small smal cpus to transfer data to many hdd drives . And a main pcu unit

Sorry to tell you this… but honestly, you need basic computer education to understand, not only what is being told to you here, but to formulate ideas about what you want to do. Unless it is just your English that is lacking, from your comments to date, I don’t see a grasp of that knowledge. This has to be something that you will need to learn yourself by searching and studying.

At that time, with that understanding, we may be able to help you with Chia ideas. Good luck!