Do I stay solo or pool?

Hi guys, with the official pool intro - I can’t decide whether I stay solo and keep gambling or go for the pool.
Some say there is no point in solo with 2-3 PB or less, others say that even with 1000 plots one should go solo.

Have not had much luck (1 reward in about a month).

So, any suggestions please? (personally, I lean towards staying solo).

Mathematically it shouldn’t matter in the long run. But me personally don’t want to sit around and watch my plots sit there waiting to get lucky. For example I got lucky early, winning twice in the same day with a rather low plot count. I felt I was ahead of the curve and didn’t feel like sitting for another 3 months or more to see another win. So I jumped into Hpool at the time. Spent almost a month there and received 1.4 XCH for my time. Not bad. A pool will give you a steady income. Theoretically the same income you would get farming solo. But you get it constantly in small pieces. I feel better in a pool. It is up to you.

The benefit of a pool is that it’s caculatable. I would join a pool whether I have little or many plots.

IMO pools are for the patience challenged. Why give a % of earned XCH to someone else when it’s absolutely simple to just plot and sit, wait for rewards? Instant gratification may feel good, but patience is more profitable.

We have what? 10 years to farm? And we’ve had a couple months so far? Why’s everyone in such a hurry? I simply don’t get it. Solo farming is literally like watching a garden grow, mature, and bear a bountiful harvest. And fruit is worth $100s of dollars, not pennies and dimes along the way.

If you did a good job of plotting, why not reap the rewards solo.

It is easy to do the math and say that solo is most logical. However, when you are at 400% expected time to win solo (you will be there at some point, do the math) then you will wish that you had joined a pool. It is hard to not worry when you have invested 10-20k that something is wrong with your setup. Talking from my own experience here…

For me there is one reason:

To be sure you actually get rewards.
Too many stories out there of people having trouble with their solo farms while everything says its running, but somehow its not getting blocks.

If your estimate is 1 month ot will take you 3 months before you figure out something is wrong .
That’s the main advantage of pools imo and the same reason i joined hpool early on.

You maybe wasting time waiting for solo rewards. If you join pool now with 4500 plots you will have 1 or more XCH in around two weeks or so versus farming for 2-3 months with no proof found.

I’m following the % luck for each block reward in the pool that I have joined (Space Pool) with interest: 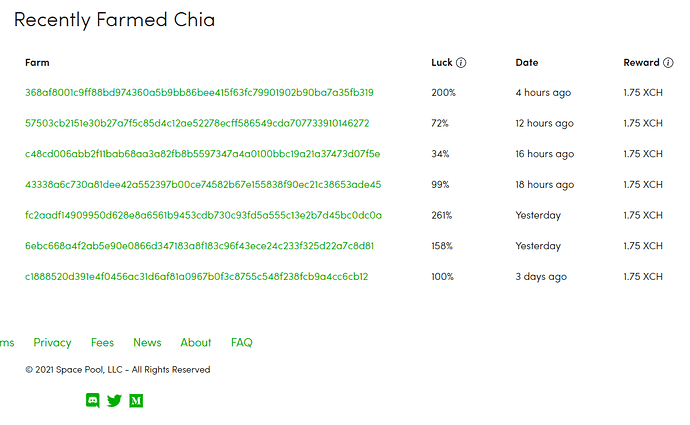 For an explanation of what % luck means: 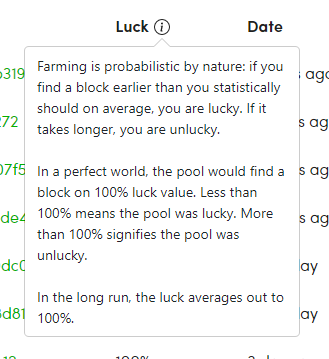 You will find one block that took 2.6 times the expected time to win here as well as a block taking 0.34 times expected time to win. This is what you can expect from farming solo as well. The only problem is that when you are farming solo, and you are at more than 300% expected time to win (in my case 46 days or more without a win), it is hard to know if your setup is ok or not. Did I install a third party software on my farming/harvesting computer during this time? Did I install a chia clone? Did I load my CPU too much? Should I clean install windows again with a fresh install of chia to make sure that everything is default again? With a pool this worry will never be present because you can see your daily stats very easy and confirm that everything is working as it should. It’s like an insurance (1% cost of rewards in most cases) against technical issues that might or might not cause more than 1% reduced earnings over time. That’s the benefit of a pool that I see at least.

I am asking myself the same question. I really don’t want to replot everything…

The “problem” with the pools is that it no longer matters if you are lucky or unlucky. Most people say it is a good thing and if you’ve invested in it, it is probably a good idea to join a pool. You will have the certainly to recover your investments in 10-12 months if the price/coin remains the same.

The thing is, like all games of luck, they have a fun element. We like to test our luck, don’t we? Chia is no different but in the digital world.

For me the fun factor is actually more important than the investment which in my case wasn’t huge. I have 2000 plots right now and I will probably stop soon because I want to keep the farmer on one computer. Money wise, I am paying £144 yearly in electricity for the 22 hard drives I use for Chia.

Bottom line, if fun matters to you, keep playing it solo. If you want steady ROI, join a pool. I hope that helps

PS: Personally I expect to never win anything and when it does and it did, It felt amazing!! You won’t get that with a pool. If it makes sense

See the last part of the explanation for % luck in my post above: “In the long run, the luck averages out to 100%”. There is no real luck or unluck in the long, long run. However, there is the potential of 0 rewards because something was wrong with you setup while farming solo. In other words, there is low upside long-term while there is risk of huge downside (0 rewards).

This is why you should test everything. There are a lot of guides out there to help you test your setup. Once that’s done, that’s it. Stop worrying too much and leave it be. Check it once a week to see if you’ve won and maybe once a month check for bad plots… but other than that, you’re done.

keep the old, Join a pool and plotting new NFT plots for the free space first.

You are probably correct here, but if it is 1% chance that you got some “bad” code on your computer (i.e. hard to diagnose issue), are you willing to take that risk? Maybe you are open for this, but I would rather know 100% that everything is working when I have invested a significant amount of money in such venture.

It is not a good idea to keep gambling, like you said, if you’re stressed. See it as a business activity, not as an entertaining activity. You can’t have both. Business or pleasure

I will not sell any chia in the near future (in fact I have saved all of my rewards so far), but I would like to be rewarded a fair amount of chia for the % of netspace that I bring to the table over time.

I see it as a long-term speculative investment and as a fun hobby (I like solving technical issues/problem solving my setup etc.). But I rather solve my problems fast and have more chia IF it would turn out to go 100x one day. Just saying.

It sounds like you need the flexibility the NFT plots offer. Solo farming after you’ve recovered your investment. If you still have space for 4000 plots, use that space to join a pool and possibly leave the other half as it is right now. You still have a couple of months to decide. No stress

I think you guys are missing the main point - replotting 5000 pools will take another 1.5 months…
Not like I can switch to pools back and forth

Totally understand you! Thank you

Just 2 XCH made me happy, and I spent ~$55,000 on 3 rigs + roughly 1PB of space (most were bought during the peak, expensive rigs on ryzens, no cheap xeons, cause I was pretty noob 2 months ago)…

Anyway, if it was not about replotting everything - I would probably go for pools, but another 1.5 months of replotting existing plots makes little sense to me.

To answer the OP and anyone else. To pool or not, seems to be very little to do with how much XCH you will get and everything to do with whether you like waiting. Do you want to ride the roller coaster or the train?

I plotted about half of my storage with OG/original plots about 50 TB, now I’m going to plot the rest as poolable plots will add more storage as/when I find cheap drives and enclosures. After that I will probably overwrite the OG plots as they will be more versatile whatever I do next. It is a shame that we used the electricity to plot OG plots that have less utility going forwards but the pooling seems to be very well designed and worth waiting for.

use our service here, 3-5 days for you if your network is good enough
https://fast-plotting.com