I recently lost an external hard drive. So I thought about replacing it with an internal drive (found a good price) and using a docking station. Note that this will not be used for Chia.

After reading Amazon reviews for several models, this one had the fewest complaints, and the highest average customer ratings: 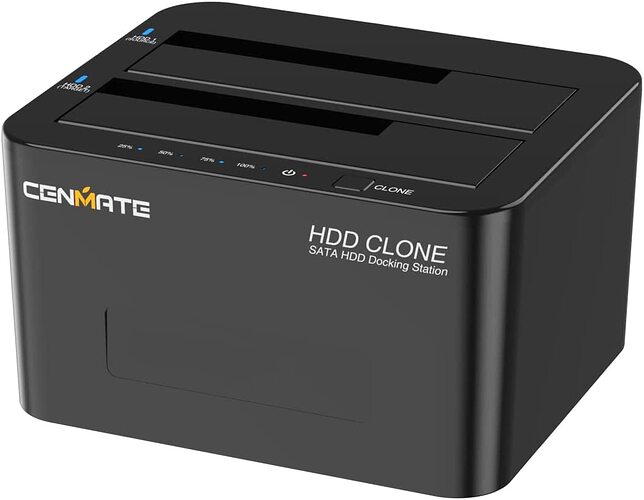 What I do not understand is why the description reads:
“…can support up to 8 TB 2.5”/3.5” HDD or SSD simultaneously, which can support 16TB totally.”

The unit maxes out at 8 TB for either of the two slots (or 16 TB if you use two 8 TB drives).
I do not understand why the unit would have an issue with larger capacity drives?

Id ask on amazon , maybe ppl have bought and tested it.
My 5 bays said they supported up to 80tb but work fine with 90tb.
Possibly its a software / driver issue, but could well run fine with larger drives.

Possibly the onboard ‘offline clone’ uses some small embedded OS that only recognises up to 8TB drives.

Also possible that it’s an older design device and 8TB was the largest available drive at the time of design/release.

@Bones I did not see a facility on Amazon for asking questions.

I just found it by searching for an answer in the products “Customer questions & answers”, which is listed far below anything that has to do with the product being viewed.

Even then there is nowhere to ask a question.
I discovered that by performing a search in the “Customer questions & answers” field, it will ask you if you found your answer. If not, it finally offers you a small field to ask a question, which is limited to approximately 100 characters.

Which 5 bay devices are you using ?

@DanRelfe Perhaps, due to it including off-line cloning, it does have its own OS, and it is probably a crappy OS.

So I can understand not being able to clone larger drives. But the OS should at least allow for some sort of bypass when cloning is not being performed. It should just act as a hub and not care about the size of the drives.

But it is what it is.

There are other two (or more) port docking stations that have no such drive limitation. But I am tired of pouring through reviews, and I do not want to spend more than $50 on the docking station.

I think it depends on when the product came on the market and what was available as the largest capacity hard drive at the time.
because no one knows if years later a standard changes so you have with older hardware products usually smaller hard drive sizes specified although they work without problems with current sizes.

at the beginning of my chia time over a year ago I bought this here (at that time still for 67.99€)
https://www.amazon.de/gp/product/B07H11KXCL?th=1
At that time it did not say that there are 4 x 18TB run, but runs smoothly with 4 x 18TB.
Meanwhile, the description was adjusted and even 22TB are probably no problem.

@amarena I have a motherboard from (I believe) 2005.
Any USB drive I have plugged in works, including 18 TB drives.

I know of no computers that reject any size drive, no matter the age of their USB implementation.

This seems to be an issue with a proprietary chip (or OS) that several cloning docking stations use.

I might as well get a single port docking station. I will start reading their reviews, and cross my fingers that since no cloning is included, perhaps it will be a simpler design with no drive size limitations.

I do not need two ports. I just like having a free slot for whatever might surface down the road.
If it comes to that, then I will purchase a second, single slot docking station. Argh!

But the OS should at least allow for some sort of bypass when cloning is not being performed. It should just act as a hub and not care about the size of the drives.

These are good for temp drive access and to make copies etc. It has no FAN and if left in the drive will get hot!!! 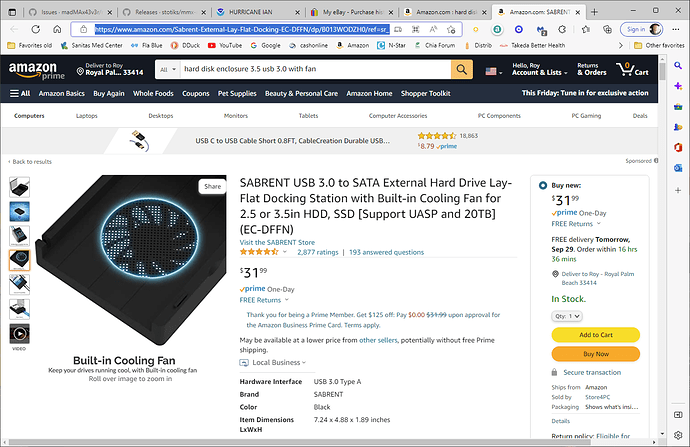 When this came out they didn’t have any larger drives than 8TB, there not going to change all the DOC’s.

Yottamaster i have 2 differemt versions, 1 that can accept raid but it isnt forced, these are built well, and some cheaper orico, they are a tad less elegant, and you need to screw in the drives to holders , iirc the yottas had prongs built into the trays for easily adding the disks.

I think the 8 bays the others are using are better price now though.

It looks ideal for my purposes. But there is a common complaint in the reviews about the dock not recognizing drives (that are recognized elsewhere and have been in use elsewhere), and you get a pop-up stating that the drive needs to be initialized.

@drhicom Are you using one?

I searched for units up to $200, and could not find one that did not have significant and common complaints about serious data loss issues.

And those problems are 3% to 5% (sometimes higher) of people that bother to write reviews. That’s a lot of lemons, and I am not going to risk my data with these flaky docking stations.

Any external mechanical drive comes in a type of docking station enclosure (a permanent enclosure with a built-in fan), and they just work. But buy one where you can swap drives, and you enter the twilight zone, risking tossing your data.

I own one of these: 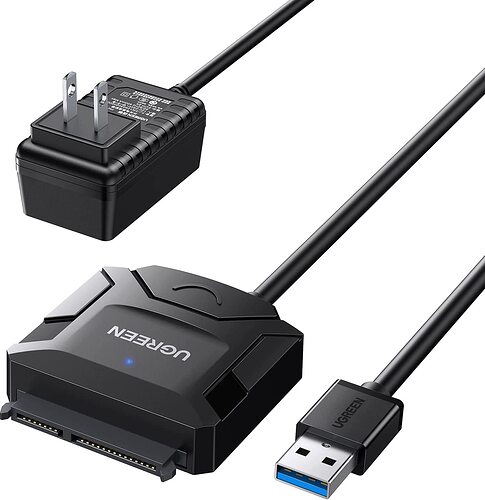 It works great. It just makes the connection. For some reason, all of the other docking stations have overhead (that does who knows what?) that causes problems for many people.

I am tempted to purchase another one, and blow a tiny fan against the connected drive. It is not an elegant solution, but it allows me to choose any internal 3.5" drive that I want, will work, will cost less overall, and will allow me to easily change drives.

I was just looking for one with a fan this morning. Have to be some good units with fans.

Can always flash your own firmware. To most computerized devices running on the line. Just ask the Linux kernel.

Don’t think so. The cost BOM reduction for those devices have no room for programmable ROM / flash mem.

Can always flash your own firmware.

The last time I flashed I was out of commission for a week.

I personally do not like these multi drive docks as I had bad experience in the past where the onboard controller would drop one of the HDDs when you had high IO utilization on both drives in parallel. That said the 8TB is likely the limit on the cloning controller due to it being 32bit but the on board SATA to USB controller may support higher capacity HDDs. There is likely a switch somewhere on the unit to change the mode from cloning to passthrough.

You could try other multi drive docks but based on my experience I try to stay away from them and just go with the cheapest singled HDD SATA to USB adapter (ex: just got few of these but have not tried them yet) that has a power connector to support 3.5" drives but no adapter. Then for the power I get a higher power 12V adapter and a 3 or 4 way splitter so that I can use 1 adapter with multiple drives. This way each HDD is on its own USB adapter and if the adapter starts to fail I just swap it out. This is what I did when I started with Chia but very quickly the number of bricks started to grow and I built completely custom 12V power delivery for my 32 USB drive Chia farm spice rack

I ended up purchasing this:

That external USB LaCie drive decided to come home from its vacation. I do not know why it left, or where it went. But I turned it back on and it is working as if I imagined the whole thing.

With my new Syba enclosure and the 12TB renewed drive, I copied all of my data over. So that worked out. And I can easily add more drives, if that ever becomes a need.

I ended up choosing the above Syba enclosure because it comes with eSATA connectivity. It also supports USB connectivity (which is probably what most people use). But I connected mine with the included eSATA cable, and it works great.

I get to keep my available USB ports. This is on an old computer (Asus Sabertooth x58 motherboard from 2005, I believe), where I never had anything connected to its eSATA port, and probably never will, again.

I discovered that my motherboard offers both “powered” and “non-powered” eSATA ports. I used the non-powered port, figuring that my drives would be powered by the Syba unit (and that worked).

But what type of SATA device could make use of a powered eSATA port?
I can’t think of any SATA devices that would get powered the way a portable USB drive (or USB flash drive) is powered via the USB cable. What kind of external SATA device would be powered from a SATA cable?

Also, I wonder, since I am using the eSATA connection, if I would be able to RAID multiple drives housed by the unit? I might never find out, because I have no need for additional storage.

But maybe someone knows about using RAID via eSATA?
Standard SATA (internal) supports RAID configurations. So I would assume that the external variety would also support it, but might be limited to the OS handling that functionality? 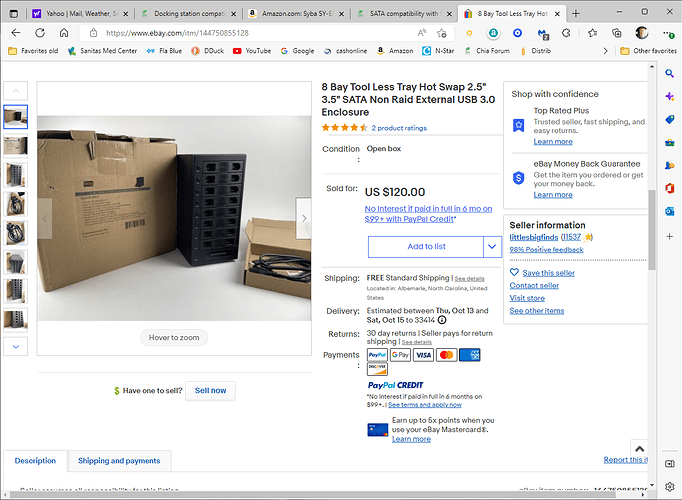