My impression was that each External Drive consumes about 4-5W of power. However, I’m seeing threads pop up in Chia Discord and other locations where people are raising concerns around powering HDDs by hooking them up to Surge Protectors (i.e., overcurrent may lead to fires)

At what scale would the above be an issue? Would plugging into a UPS help offset any risks? From what I understand, the UPS can detect overcurrent and shut itself down before damage.

Only a trained Electrician could tell you the load you can put on your outlets/breaker box.

It really is a question of scale;
I’ve seen some mining YouTubes that make it look like their basement is a datacenter. I don’t know what the power requirements are. If you are going to run multiple computers and external HDD you will want lots of power and power outlets and you may want to search a bit for loads on household systems.

Personally I run a fair sized network from my office location and am guilty of using 2-3 extension strips.

You may only know by being careful to add equipment to your network.

Consumer level external drives are probably not going to have the most efficient power converters.

A HD does consume a lot more power during spin-up than once it gets rotating at speed.

Your typical 16A powerstrip might get overwelmed at that first peak when everything starts up at once after a power outage or at boot up of the controlling computer accesing these all at once and pulling them out of sleep/standby.

As they are external drives and independent from each other, they will not typically be ‘staggered’ in their spin up process.

You want to size your electric circuit for the worst case (everything starting up at once), not the power during normal operation.

A surge protector protects against external surges AFAIK. Might help by tripping a switch if all those drives suddenly ask for MOAR POWA! 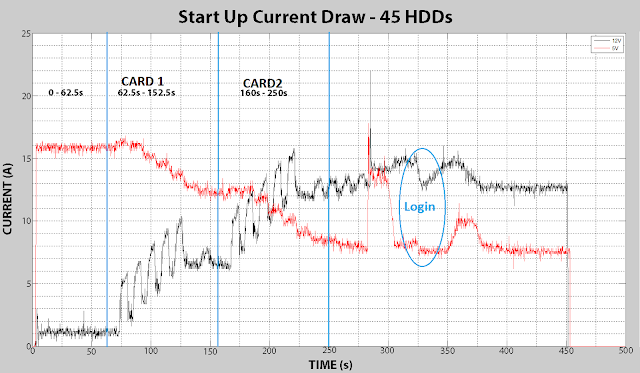 Staggered Spinup and Its Effect on Power Draw - 45Drives Blog

In Part 1 of the series, I discussed the Power Draw of a Storinator on Startup and other conditions. Results showed that our Storinator’s...

Hmm, I was thinking a UPS akin to this: CyberPower UPS

It should have a bit more intelligence compared to a Power Strip and should be able to shut itself down. Worth it?

Also, I don’t anticipate my farm getting over 40 drives. At that figure, would the load from cold-boot be enough to cause problems or it becomes a valid concern at much larger scales?

I wouldn’t invest in a UPS for this. You probably don’t boot them up very frequently. If they are external I would split it across 2 outlets (with proper extension cords) and after shutdown manually start them one by one with some seconds intervals. If the combined setup draws too much power from the bottleneck (the power outlet) a UPS is not going to help / save you I think.

Makes sense. My concern is, what if there’s a power loss? Under controlled circumstances, I would ensure that each drive is plugged in with a 9s delay. In the power loss scenario, the strips would suddenly receive power and thus may cause an overload.

Is there a way to ensure that the Power Strips do not gain power after a blackout period?

This is what I found: switches - Auto turn off switch during power outage - Electrical Engineering Stack Exchange

Something like this - it was this brand but not this model. Yes it’s expensive but you can find them around on ebay occasionally for a LOT less - i still have mine somewhere in the garage

Oh wow. That’s a little bit higher than what I was expecting. Perhaps there may be a market for cheaper External HDD power supplies if Chia takes off lol

I have seen basic HTML controllable power outlets like this …

I power my farm with a server PSU (12v, 1300w) and some basic DC->DC 5v converters (20a each), and i am considering some staggered start mechanism as i will have upward of 90 (smaller) drives under control of 1 farmer - i don’t use USB/external so the basic PSU in each is not a problem for me