It has been few months that chia mainnet went live and i would like to know if anyone has experienced failure of HDD over these months.

I would like to analyze if some models/external/internal drive has higher/lower probability of failure.

IMOP there is not enough HDD failure associated with Chia farming to analyze.

I had a Seagate 6TB Expansion with sector error shortly after I put it into service. Hasn’t really affected anything that I’ve noticed.

I had a Seagate Skyhawk AI 18TB Internal Hard Drive die on me after 2 months of being on 24/7 . Thank goodness it comes with free data recovery. Another one is starting to make an intermittent screeching sound now. May have to send that one in as well. All my Seagate Exos 18TBs are doing fine. Just concerned about how warm they get when compared to my helium filled WD Ultrastar 18TBs.

I think sites like Backblaze will continue to be the place to look for HDD reliability info. Chia farmers are probably using too many used drives, or too large of a variety of drives (e.g. buying whatever is cheapest all the time) to draw any conclusions.

I had out of 15 seagate exos 18TB, brand new, one failed after just 1 week. Replaced through warranty.

HDDs have this curve of failure rate: either it dies very early or will work years

I’ve been using 50+ HDDs since May 24/7 and not a single one has failed on me. Got a mix of used and new drives. Oldest used ones were manufactured in 2002 and have thousands of hours in them. Still rocking fine farming.

Among all the hard drive manufacturers, I have the best experience RMAing with Seagate. For iPhone users, they use Apple’s Business Chat which works great. Other manufacturers like Western Digital gave me the long run around by saying its within warranty, then denying my online RMA submission, forcing me to call it in or use their mobile unfriendly chat system. After all that the WD rep told me they’d get back to me after they asked for photos of the drive. Ridiculous compared to Seagate’s outstanding service. Also, Seagate’s website allows me to keep track of all the hard drives I have and their warranties via my account.

Also, Seagate’s website allows me to keep track of all the hard drives I have and their warranties via my account.

Now that is some useful information!
Gotta check that out. 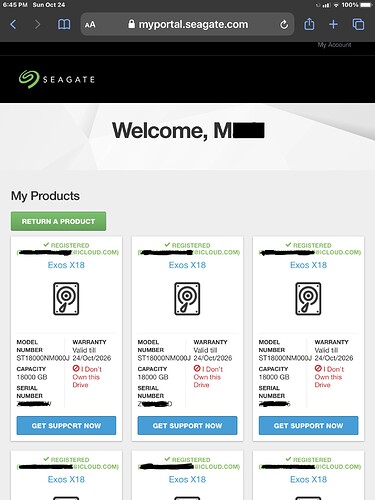 I have a mix of WD and Seagate drives, and a mix of each of their various models.
Basically, I was purchasing whatever I found to be a fair price, based on the cost per TB.

The following are all USB models:

One of the g-drives that I purchased from bhphotovideo.com vibrated a lot. B&H is good with returns. They took it back. There was no way that that drive would have lasted.

Two g-drives that I purchased on amazon decided that NTFS was a chore, and took it upon themselves to revert to a RAW file system. They did this approximately 3 days apart from each other. Both drives were full of plots. Neither drives revealed any plots via my recovery efforts – even though I wrote zero bytes to them after they failed.

It took me 1 month to get an RMA from WD. And that was after more than a dozen phone calls.
Their on-line RMA system does not issue RMAs. It issues errors. And the WD representatives got the same errors when they tried to create the RMA for me.

It has now been 10 days since they took delivery of my two faulty drives, and they still have not shipped me my replacements.

Western Digital is a nightmare to deal with. They are polite, while they give you excuse after excuse for nothing getting done. I believe that the folks that take the calls are taking flack from irate customers, and those call-takers are not to blame. But it is impossible for the customers to speak to anyone else.

Western Digital is horribly mismanaged. Pray that you never have to RMA one of your drives.
I have read stories about people returning drives, WD keeping those returns, and blowing off the customers (never shipping out replacements).

For comparison:
I did return two Seagate Backup Plus Hub drives. Later, it turned out that the return was not necessary.

Two of those drives gave me the Windows USB sound, when I connected the drives. But neither would give me a drive letter. I tried on 3 different computers, running Windows 10 and Windows 7.

The problem was a minor one, and appears to be a quality control issue with Seagate.

The fix was simple, once I learned what to do.

The drives show up only under “Disk Management”, while an administrator. But they show up as “off-line”. All I had to do was right-click the drives, choose “on-line”, and that’s it.

Seagate’s RMA process was a delight. A complete opposite of WD.

By the way, the Seagate Backup Plus drives are not a good value, in terms of price per TB.
I purchased them because they come with two USB ports via their internal hub. So using them not only does not consume a USB port, you actually gain a USB port (you use 1 port on your computer, and then have two available ports on the drives). And I experienced no performance difference with the drives connected to the ports on the Backup Plus drives. 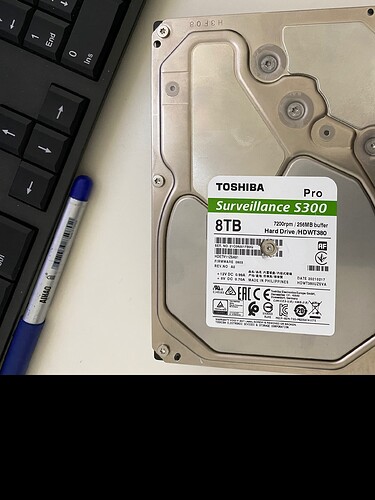 I’ve had 3 drives fail. But all of my drives have 4-5 years of run time already so I guess that’s to be expected. They were running inside JBODs in an airconditioned Server room.

So far I haven’t had a drive fail on me yet. The day it happens, I will just replot!

All my Seagate Exos 18TBs are doing fine. Just concerned about how warm they get when compared to my helium filled WD Ultrastar 18TBs.

How warm are you talking ?

My Seagate Exos are between 37-39°C and my WD Heliums are 32-34°C. The WDs seems to have more metal(heatsink effect) in the surrounding casing so in addition to the helium they appear to run cooler. The Seagates have rounded upper corners so less metal to act as a heatsink.

Are you cooling them actively?

Open configurations aren’t optimal for cooling. Try to have an enclosure with fans on both sides - to push and to pull air. They should get to ambient temp. 30-40 isn’t bad but it’s not great either.