How many HDD's can one system actually handle

Hello, I’m planning on building 1 main farming machine and I got a lot of 2-3TB Hdds lets say, if I want to connect them all to one system later won’t there be some bottleneck for farming? I’ve heard there must be some response time from them (need to look closer at this)
So let’s say connecting 12 hdds via sata ports on the motherboard and 40+ with XT-XINTE For Marvell 88SE9215 8 Ports SATA3.0 or Adaptec ASR-71605… what do you think? thanks

the response time issue was pretty much more about many NAS devices across the network (1-2 should be fine). On a local machine, you should be fine to the limits of what your board can support. Though, I would question 40 devices on those boards? How are they getting connected (and I don’t think a normal board could handle that?)

oh ok I see… about the 40 devices, check those 2 adapters at the end of the post the Adaptec allow you to connect 16 more sata devices via Pcie port, I got ASUS Rampage V extreme workstation motherboard with free 4x pcie and cpu with 40 pcie lanes hope it can handle it

Make sure the power supply can handle spinning up that many HDDs at the same time. I doubt a consumer PSU can do that. There’s a reason why many NAS devices stagger the spin-up of HDDs.

hmm spinning hdd uses what like 10-15watts max? also consumer psu could handle that if you have the right reductions and know max wattage one cable can provide… but I will surely go for high quality one to not burn them out, I can also combine 2 and more psu on one system no probs

You need to look it up for the disks you’re using. 10 watts is a low estimate for spin up which is what @gerhard is talking about.

That doesn’t take into account how much current a wire can carry. Be warned, I have no idea what I’m talking about here, but this site estimates 5A on an 18AWG wire to “be safe”. I don’t know what gauge of wires come with power supplies. This site says up to 9.5A on an 18AWG wire (if I’m reading it right).

So, go back to my disks and even assuming 9.5A per cable, it’s probably not a good idea to run more than 4 disks off a single cable without staggered spin-up (2A @ 12v = 8A for 4 disks on that wire). Incidentally, I have an old SuperMicro case that uses 2 molex connectors on different cables to power 8 HDD bays, so for me that’s a decent indication that putting 8 disks onto a single cable is probably a dumb thing to do.

Be careful with splitters. Some of them are dangerous.

Take care picking them though, price isn’t everything. I’ve had a fancy braided SATA power cable (don’t ask me why I even had that) catch fire because the galaxybrain design got the wires tugged out of either the insulation or the connector and I didn’t notice, causing an arc once I turned the system on…

As far as internal power goes, 5w minimum and perhaps up to 10w under full load would be my estimate? Multiply that by the number of drives and make sure your power supply is rated for at least that much.

short answer : typically 5-8w on average… if you want to be super safe, assume up to 10w for mechanical drives.

A 2.5" mechanical drive will consume a bit less, because the discs inside are smaller and lighter, so the motor doesn’t need as much oomph, torque, to keep the discs spinning. So a mechanical 2.5" drive will typically consume less than ~ 4-5 watts.

I have a watt meter on my AMD 5950x system which has eight drives, 1 SSD, and 7 3.5" spinny rusts, and here’s what it currently shows while doing 12 parallel plots; the drives are mostly idle though. As you can see, a measly 270w. 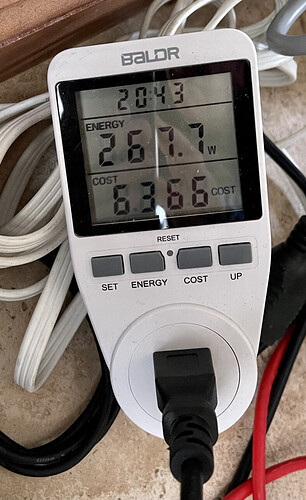 The power supply is a titanium 650w model. Without a GPU active – GPUs suck down hundreds of watts – you have so much active headroom. This is also why Chia is an efficient cryptocurrency, by the way… and as drives become more dense over time, they become more power efficient.

A maximum available 8 terabyte drive (new in 2014) pulled down the exact same 5 watts, 7 years ago. Now you get 20tb of data for that same 5 watts.

As far as internal power goes, 5w minimum and perhaps up to 10w under full load would be my estimate? Multiply that by the number of drives and make sure your power supply is rated for at least that much.

I’m pretty sure that forum post is wrong. They’re not calculating the peak usage because it’s not peak usage on those labels. I couldn’t find that exact drive, but I have a similar one. 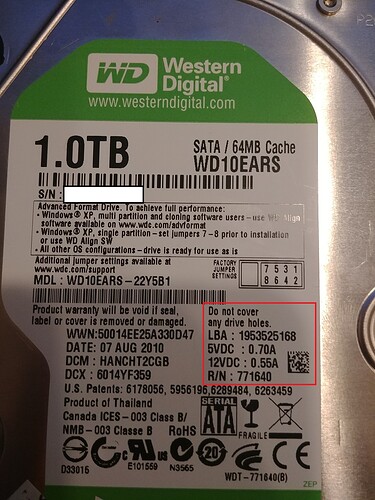 Even worse, look at the spec sheet and try to figure out anything that’s important. The power draw is listed as combined wattage (I think?), so you can’t figure out how much is 5V and how much is 12V. There’s no mention of a peak draw for 5V, so does that mean it’s .7A or is it more than that? For me, just looking at the spec sheet would lead me to believe the thing only uses 12V, but the label on the disk says otherwise.

I wish the manufacturers got called out more for that type of thing.

If someone can look at that spec sheet and tell me the exact 5V and 12V peak/average requirements for that drive, please do.

You can look at my NAS numbers. I think 3x is a bit dramatic… initialization of the disk array is fairly intensive, disk-wise, and it just isn’t that much:

As far as live fully populated with 5 drives, formatting the array, 50w - 65w , idle after array built, 43w - 44w . Considering that amount of energy will store a LOT of Chia plots, many many terabytes, that’s where the efficiency comes in!

I’ve used watt meters to actually measure this stuff, so I’m pretty confident in what I’m saying here… but you’re right, 10w is probably a better number than 5w as far as average use… but it’s below that in practice, 8.6w.

I think 3x is a bit dramatic…

I think we may be talking about different things.

I’m only talking about peak draw which is basically as the disk spins up. The 3x was showing that if you look at the spec sheet for that drive, you need to plan for a peak that’s 3x what’s written on the label. The label is probably closer to the typical power consumption, but you need to plan for the peak if you’re building a system with a lot of disks.

I calculated it when I put mine together and ended up swapping the power supply. Initially I had an old 460W power supply that had 2x18A 12V rails. I think 1 rail is for VGA, but I’m not positive. I assumed peripherals are all on the same rail because I’d rather be safe than sorry. For 12V:

So once the system is running, that old power supply would probably be ok, but staggered spin up of the disks would be an absolute requirement to get it started. If staggered spin up is not supported, disabled, or not working there’s a chance of trying to draw 30A off an 18A rail.

Pragmatically, you’re probably right; go buy a big power supply and with modern disks you don’t have to think about much unless you’re getting into the range of 8+ disks.

However, for anyone thinking about stringing a dozen disks together with consumer grade SATA cards that don’t support staggered spin up, I think it’s a good idea for them to understand they need to be careful. There’s a peak power demand right when you push the power button and they need to make sure their power supply can handle it.

I’m only talking about peak draw which is basically as the disk spins up.

Oh yeah that’s true. Spin up peak could be a lot. I didn’t measure that.

There’s a reason they charge FAST! They clearly state this on the label though, it’s unfortunate that the hdd manufacturers are being cagey!

ok so I just ordered Corsair HX850 which is good quality psu with a lot of sata and molex connectors and with 5 different protections… I will be counting with approx 13+W for each Hdd, do the calculations for each cable and try to find a tool for the staggering startup… also I might move some plots to bigger HDDs like 12TB later to save space but I have read somewhere more than 8Tb isn’t recommended because of something, but can’t find the thread now…

ehh, where are people finding and sharing all this terrible and inaccurate info??

It’s from a cost per tb to own perspective. Higher density is more bang for buck, that’s it.

From both monetary and power cost

for me it’s not just that, I’m looking also for potential resell values which is way better for smaller hdds because I can put them into gaming PCs which I’m building for example… also if one large drive dies u lose ton of plots and also more money… you can lower this risk by purchasing multiple smaller ones though the price per TB is higher