This whole thread is just one of many about netspace.
You can never tell the future, but I think we’ve moved out of droppage and onto a plateau.
I enjoyed seeing my predicted earnings rise, but now they’re just not.
Up and down sure but that’s just how chia decides netspace and to be expected.

Kinda looks like it yes.
Today was a strange day, suddenly a lot of trading and price going up a bit.
Node count suddenly went up by 7K nodes in less than a day after weeks and weeks of dropping count.
Netspace hasn’t really been dropping that much for a while now.

Good to hear node counts up!
All these doom and gloom threads make me chuckle.

Yup, that 5k was a big jump up, especially considering that in the past month it dropped by 50k.

It really nicely shows as a blip on this one month chart. 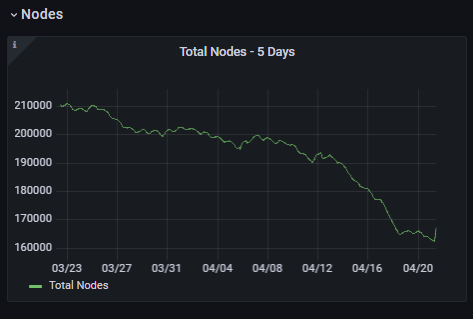 Sure, fair point of course we have to see what it will do in the next few weeks, but it’s still quite a reversal from dropping 30K in just 1 week.
I mean the drop was speeding up quite a bit last week

Are these big drops and jumps in nodes coming from pool node counts or pool shutdowns, or WTH?
If not that, how could 10, 20, or 30 thousand nodes suddently change to off, or on?? I don’t understand, something is off* with these numbers.

*When what you read doesn’t match common sense about the world.

That chart is from here - Grafana. That is the official Chia page. Here is the original post - Chia Dashboards

I don’t doubt they are real charts and numbers, it’s a blockchain after all, and they must know.

But how in heck can 30,000 nodes just disappear over a couple day? Virtual nodes? Instances on some supercomputer? Even my imagination can’t cope

But why wouls someone run a botnet with chia nodes?

To counter why not?
Each compromised comp would be better of being a node, with it setup like that you’d get the quickest response times.
What’s the alternative, point them all at one node and force delays as they all sent proofs there and then on to the destination
That would increase network traffic making you more likely to be found out, and also create a single point of failure.

Edit.
Also, if you wanted to create a dust storm., wouldn’t it be better coming from thousands of nodes as opposed to one, one could easily be blacklisted by the network I’d assume.

Edit.
Also, if you wanted to create a dust storm., wouldn’t it be better coming from thousands of nodes as opposed to one, one could easily be blacklisted by the network I’d assume.

That makes sense, could well be.

On the other hand. I think also just a lot of people are quitting, high energy prices, low chia price.
all the fortune seekers are calling it quits.

atm, node count is back up to 173K (from 159) and netspace is holding quite steady just below 28 EiB.
So definitely seems to have stabilized a bit

To counter why not?

About 150k nodes dropped from the peak. In the past 5 weeks around 60k. Assuming that the last 60k nodes are part of the botnet, what is the botnet target? Isn’t that to make money?

If a bot is sitting on a box, it for sure reports home what is installed, and chia can be easily identified. One could think that the bot could start using CLI, and syphoning XCH, and that would be 60k nodes * 2 XCH ($120) per node making it worth ~$7m. So far, there was no spike in people complaining about some “new” behavior of their nodes.

Add to that potentially 1 year for some people with not much to be proud of. Also, depending on how taxes work in respective countries, some people may be forced to pay taxes on XCH earned, and the base could be XCH peaks.

Could well be just that, normal nodes going offline.
Be interesting if someone plotted node count and dust storms on the same chart, I can’t be bothered, but that would paint a bigger picture.

How my ppl are like my old man used to be, can’t even find the internet browser tab, and are clueless to how it all works.
My father used to think his emails were on his machine…
I’d bet millions of ppl are just like that.

Be interesting if someone plotted node count and dust storms on the same chart, I can’t be bothered, but that would paint a bigger picture.

The current dust storm started early in Feb, and is at constant level since. One would think that it would be a rather hard hit at the beginning (where “weak” nodes would go down), where the rest would be moving along.

Could well be just that, normal nodes going offline.

Possible…yes, probable…no, none of these number of disappearing nodes pass the smell test (sniff, sniff

). Perhaps at the next gathering online of Chia, this can be asked of them. They may have more in-depth data to elucidate the issue.

The current dust storm started early in Feb, and is at constant level since.

I beg to differ, tx’s recently dropped to next to nothing…
We even had a post saying so and advising pushing any sends you needed sending…

I was watching the charts and they dropped of a cliff.