I'm Changing my setup, throwing TBW out the window

I’ve been plotting 12 plots with a 40 min delay now for about two days. Getting plot times between 33000-36000 sec.
So time to change something up because that’s just too slow.

When I got started and ordered the system I was still looking primarily at TBW and had never heard of a thing called sustained write speed…That’s why I also have a mainboard that has 2x pci2 gen 4 m.2 slots (cause gen 4 is fastest, right?

The way the Netspace has been growing, I’ve decided things need to speed up and I want to check my plan with the people here before I unpack everything.

I want to try to run those two in RAID0 and see if how many plots they can handle. Should be at least 6, hopefully 8. At the very least they should be able to handle 3 plots each (non-raid).
The TBW is only 600, I will let you know how fast they actually burn out…

I will then see how my two “old” drives fare with just 3 plots each, hopefully this should do fine as well.
As these two have much higher endurance ratings (3.6 and 4.4). I think I will keep them for when plotting becomes less urgent.

My thinking is that if plotting faster now can earn me even one coin extra in the coming months, it doesn’t matter much anymore that the WD drives burnt out fast, because they will already have paid themselves back.

I will also see if the CPU is maybe just not up to running 12 plots at a time, but I think the problem is more in the ssd’s than in the CPU.

P.S. Both the Aorus(big heatsink) and the Transcend(no heatsink) where running quite hot, 68 for the Auros and 71 (thermal throttle) for the transcend. After I installed a 120mm fan on the side panel, temps dropped by 8-10 dergees C. just fyi

On the temps I stan these 120mm USB powered external fans SO HARD! They are awesome and super fun and flexible! You can daisy chain 'em too! 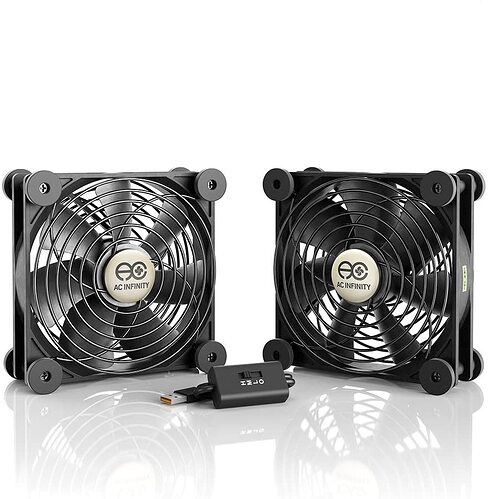 those do seem handy

BTW those Icy box things work like a charm. I’m seeing temp at 38C, while the other two are at 60C
All three running 3 plots parallel atm.

I tried plotting with queuing and delays, it always seems to make the machine just run really slow during the next cycle. I have much better success just having everything run parallel, then rebooting the machine once it is complete and then starting again.

This is on Windows though, whether there is memory management issues or memory leaks I am not sure, but if I am plotting for over 24 hours without a reboot I even see it affecting my farms (drives disappearing haha).

I wonder if fan is better than the thermal pads like these, I am purchasing new NVMEs and are considering something like this 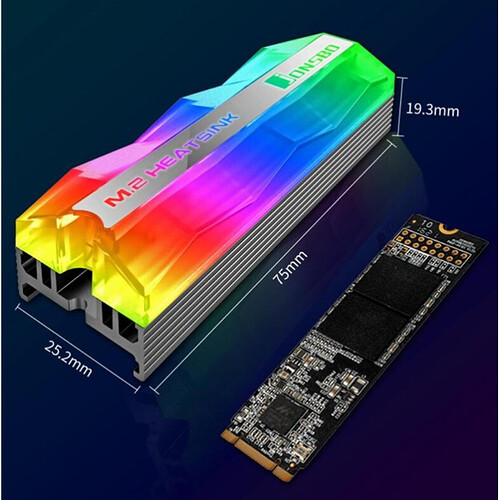 well I have both

The Icy box m.2 extension cards have a heatsink very similar to that one, but I also have a fan blowing from the side intake, so the heatsinks get direct airflow.

It turn out that I really did miss something

I haven’t used expansion card in ages, mostly do SFF build. Somehow I had it in my head that those small PCIe slots where X4 slots…

Since they are not and I only have 2 X16 slots, the two pcie cars can’t fit because I also need a graphics card. Thankfully I found someone with a X1 graphics card and that should be arriving soon.

I have been running 3 staggered plots on each disk (so 9 total) for a while and got pretty consistent times around 27K seconds (4t/4600MB). The differences between the three are minimal, although the transcend is slower than the other two by about 1000 sec and the sn750 is fastest by a tiny margin.

I would like to do more testing and comparison, but I also need to plot so…we need a plotting benchmark. Something that will run 1/10 of each phase to give a estimate of plot times without having to wait a day to complete testing

At least I can make the following assumptions:
for a ryzen 3900X, any above average 1TB nvme is probably good enough for running 3 plots. From the testing at Tomshardware it looks like the sustained write speed between 1TB drives and 2TB drives is pretty much the same for most models. Therefor the 2TB drives will not be able to utilize the full space they have because they reach their write limit.
So for 2TB drives sustained write speed matters a lot more than 1TB drives, although it also depends on your CPU speed.

If you have a faster CPU, you might need a faster nvme to do 3 plots on 1TB. Because at 4 plots the 220S was slowing down quite a bit and running hot, while the Aorus has no trouble with 4 plots. So I’m deducting that doing 3 plots at 7.5 hours a plot is already the max for the 220S.
Therefor the 2TB 220S is pretty useless for plotting, but the 1TB 220S is still a good option paired with a sub-top CPU because of the high TBW rating.

As soon as I can get the other SN750 installed, I’m going to pair them together in RAID0 and see what happens if I run 8/9 plots on them.

Another conclusion that I will repeat: Gen 4 pcie is completely useless for plotting, at least for as far as consumer ssd’s go.