… but you haven’t told them about the power consumption

Sounds like your k34s scale well @ x2 my k33s. I’d love to see logs to understand how it treats the phases

What do you perceive gives most advantage … RAID on the ssds or strength of the M1 CPU or … ? … the 980 Pros are pretty awesome little guys! Is Thunderbolt the best connection of the M1 … no nvne slots?

CPU’s are not fully utilised, so if I had the disk space I could probably do two in parallel for a quicker per plot time.

PS. I do suffer with the random phase two slow down, so not sure if this is in slow mode or fast mode.

What MM parameters are you using? That can made big changes. And two (maybe more for your cores?) in parallel knocks time off as it uses the CPU more evenly and esp. when you stage Phases.

Can’t do two in parallel as only have1TB of temp space.

Quite a few people have posted to the thread for random phase two slowness, but unfortunately no answers or fixes.

Right 36C. Might try r 18… esp if and when you can do two parallel. Otherwise, that’s same as my setup. Thought you just got a couple 1tb SSds?

I would use R 18 when running two in parallel, which is what I did when doing K32 in parallel, but would it make any difference with only one plot - I’ll try it anyway.

but would it make any difference with only one plot

Not sure. I’ve found 1/2 cores is about like full cores, sometimes better. Times are a so variable it’s hard to tell what is the best setup.

I just tried it with R 18, phase 1 was looking considerably slower so I stopped it.

I try another run with the same settings I used earlier just to see if it was a slow phase 2, unless of course I get two slow phases 2’s in a row.

Do you have any PCI-E slots?

Yes, four x16 slots free, no I don’t want to buy any NVME drives, or single NVME expansion cards (I probably still have some), or even Asus Hyper M2 cards - system probably does support bifurcation.

A year ago I spent a fortune on various NVME drives, some have been sold, some have been repurposed. I can knock out K32’s entirely in ram one every 12 minutes, and K33’s in 57 minutes*, I really have no need to spend substantial amounts of money on plotting hardware - it would be better spent on spinning hard disks for plot storage. Only bought the last two 200GB drives just so I could see how long K34’s take, and I deleted that K34 as I have no where to put it at the moment

*Hopefully the new version of Bladebit will do K33 and K34 plots when it arrives, in a combination of ram and storage space.

I hear you. I have to go over to Bones’s loft and wash his car a couple more times to get some Quid then buy some more hard disks…

P2 seems off (my ave times in italics). Maybe P2 was in your ‘random slow’ mode?

Seems P2 was off, just did another and that was 142 minutes (2 hours 22 minutes), so 15 minutes faster than previous one using exactly the same settings.

Still quite a bit off from your times though, some phases faster, others a lot slower.

Is this what your buying me for my birthday??? 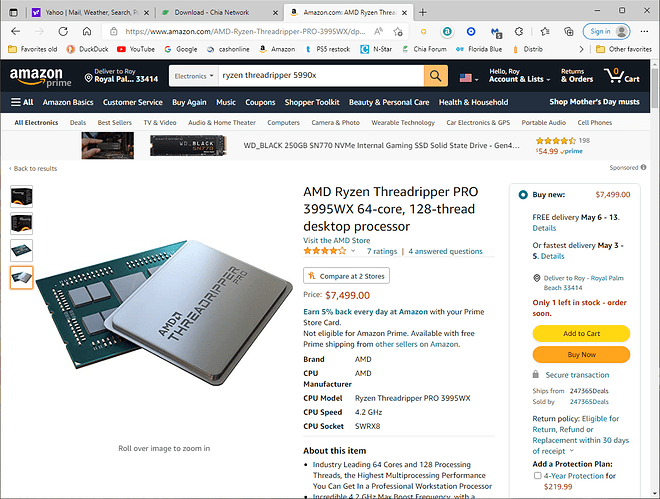 Neither am I, but it is 36 cores, well actually 2 x 18 cores, think you missed this bit though

Is this what your buying me for my birthday???

On k32 i used stoiks(sp?) And did two plots at once with different tmp nvme and no different tmp2 and averaged around 2 hours for each process. No ramdisk.
Using a single E5-2699v3 @ 2.3ghz.

Was it switching the tmp1 and tmp2 that helped or the K to 2?
Im surprised my k34 is only 2.25x slower than k32 as ive seen people on here have longer times.

I have a more powerful nas on the way with sas expansion units and a new plotter which will run debian and tmp1 as nvme and tmp2 as ramdisk. Cpu is 2x e5-2690, excited to see what plot times i can get out of that. Worth doing tmp2 as ramdisk or just straight nvme on different disks like this one? Any other tweaks i should look at on either system?