Sometimes I start to shuffle plots around, to fit K34 number “39”.

Sometimes I start to shuffle plots around, to fit K34 number “39”.

The hassle is that to move the current plots somewhere, plot better fitting k33, k34, k35, files, or move them from some other drive where they already live - is a royal PITA at 125-250MB/sec.

Although juggling plot files of various K’s is certainly an altruistic endeavor that I give heartfelt kudos to those that can suffer doing the work, it just doesn’t make a lot of sense as far as I can calculate.

Agree, that looks like an OCD forced type work.

Agree, that looks like an OCD forced type work.

No bad feeling behind that, as it is coming from my personal experience with OCD.

By the way, if we assume that plot density is constant, sure you are adding extra hashes by closing those gaps.

So, this is another argument for “plot the HD” rather than “make one plot” plotter option.

100% of my drives are NTFS formatted.
I have often wondered if some other file system would be more efficient, even if it means giving up journaling, which is hardly needed for drives with virtually no write activity after being filled.

Sounds like you might want to try PlotFS. It is beta software, but today it does work and uses FUSE to implement a filesystem consisting of many drives combined together into a single FS. If you lose a drive, you only lose the plots that were on that drive, and 1 or 2 plots that may have occupied the start and/or end of that drive.

Might be worth a look if you’re trying to minimize unused space. 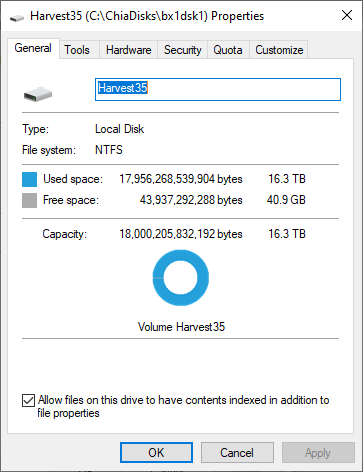 yea wish we could add up some spaces.

To put that in a perspective. Chia’s white paper advertises farming as kind of a hobby that can utilize overprovisioned HD space. That implies normal boxes that have 1-2 TB free space. With “make one fixed plot at a time” what is the overhead for such farm?

In the beginning I was keeping a spare plot of space on each drive, then folks talked about load those drives up to end… Will see what a 20TB disk will do when the price comes down to beer level…