A few days ago the stable balance in my full node wallet and light wallet dropped from about 5.1 to about 3.4. The light wallet still reported 5.1 in the pending balance though. I dug around a little bit, looked a the logs, the transactions and couldn’t find anything, so just waited to see what would happen. Well, today I looked at the transaction log on the light wallet and found that 1.74 XCH had been transferred out. I didn’t do it. I’ve only made one transaction, and that was for SBX. Just thought I’d let everyone know as there’s been talk of something like this happening.

Did you farm on OG pools?

Nope, I farmed solo until the official pools came out. I started with 21chia and moved to chiahub when 21chia announced they were merging.

Can you send a screenshot of your wallet with that transaction on it?

It should be below. Thanks! 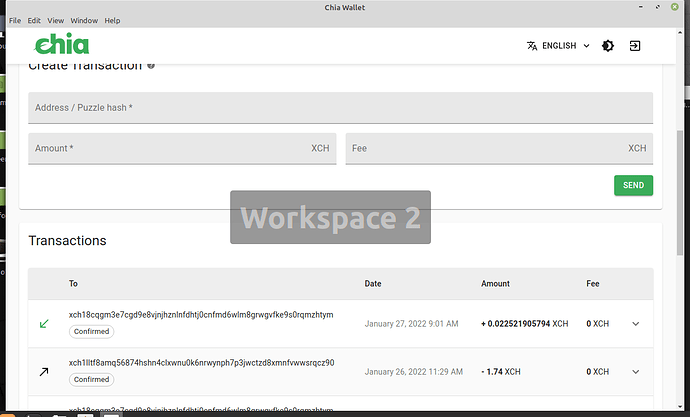 For those wanting to look up the address:

It could be the 1.74XCH was ‘change’ from a 1.75XCH (pool reward) coin, caused by a 0.01 transfer made (your SBX transaction?) from the light wallet. Change is send back to the originating wallet, but in this case to a new address generated on the light wallet. However due to a current incompatibility between light and standard wallets it does not show up in the standard wallet.

Or someone else who has access to that account just withdrew chia to the cold wallet. Just because that address has no farming rewards or something like that, there is no activity except this one transaction.

I hope you find it or that it is some sort of known issue and it gets refunded back. However, it might be worth creating a genuine cold wallet using a VM and a clean install of linux or live boot version or whatever and moving the XCH. It can never hurt to put some distance between your money and someone interested in taking it.

Could also be of course. But because the OP’s light wallet reports the full 5.1XCH I assume this specific individual wallet-address is part of his wallet, however is not recognized by the standard wallet because of the incompatibility issue. This will be solved in the next chia version with integrated light wallet.

Hope that’s the reason and xch would still be with its rightful owner!

If it were nefarious, the whole wallet would surely be emptied.

Clever scammers don’t go for the kill right away, but start out with small transfers, hoping to remain unnoticed and stay around.

Another reason could be that even the simplest malware can fire off a fixed chia command to transfer a fixed amount. It’s a bit harder to query a wallet balance, interprete the result and empty it out.

Hopefully there is an innocuous explanation, such as Light Wallet being a mess that’s eventually resolved

Clever scammers don’t go for the kill right away, but start out with small transfers, hoping to remain unnoticed and stay around.

Possible sure, probable, I doubt it.

We did have one member who had 40 XCH (as I recall) stolen last summer, either to malware or to a friend/coworker with access to their PC. Forum members went through all the usual forensics, and there was no other explanation.

That was the wakeup call for me to learn about cold wallets.

Thanks for all the replies and ideas. Fyi, I’m the only one with access to the two wallets. Looks like I’ll be creating a VM and cold wallet.

Of course with malware you wouldn’t know in advance, unless caught by a Anti-virus – most of which won’t know about Chia-specific exploits.

But I agree with others, most likely a technical issue with the Light Wallet. I hope they show up

Still curious if you indeed converted 0.01XCH to SBX?

I guess more people than before will start using the light wallet as that’s the one to use for the new CAT’s and Offers features of chia. And so more and more people will run into this issue where the standard wallet client does not show all funds reliably. While they still are there, but only the light wallet accounts for all wallet-addresses used.

This is the correct answer. When you use the light wallet it uses observer keys which the old wallet in 1.2.11 and before can’t see.

Read more here, it’s about v1.3, but the explanation about balance difference is explained: Understanding the Changes in the New Light Wallet