Maxiopool is making the transition into Full-Pay-Per-Share payout scheme (FPPS) this Thursday.

Adopting FPPS payout scheme has always been a goal Maxiopool had in mind since the beginning and it is the root of our pool. We did not have the netspace to understand the impact behind this transition until now, we do, with the help from all existing 1,300+ pool members!

Extending the 0% time helps me assume this is a good thing and not some kind of bait and switch. Willing to give benifit of doubt for now.

But I will admit to being slightly apprehensive. As a farmer, I have only just gotten used to the current payment system. I think it might help to describe specifically how the new system compares to the old one, with perhaps an example of how payment relates to netspace and luck for farmers, the pool, and the overall network. And perhaps how the change will affect the overall sustainability of the pool.

I think we all understand that pools need to eventually make some money to keep the lights on and the software maintened. Describing how that works in the long term would give us more confidence.

Thanks for the work and the transparency!

What do you mean by FPPS here? In Chia the fees go to the farmer anyway, the pool has no say in that matter, hence FPPS = PPS.

The new payout scheme is an enhancement over the existing system and it simplifies your profit estimation. We are going to boost the base payment to 100% of expected block reward so the Daily XCH per TiB stays in line with calculator values – expect this to be higher than any official protocol pools. The estimated block reward that we have in the current system is going to be completely removed. There will be no luck in the equation when calculating the profit. The only variable here is the global netspace. An increase in global netspace = less profit; A decrease in global netspace = increased profit. This is true with any pools. Longer term luck will play its role and ensure pools has enough XCH from block rewards to pay its farmers.

With recent XCH price crash, an increasingly asked question is how pools are going to remain profitable. But I think it is too early to discuss that, pools today are looking at being around for at least a few years which we are – if they are not we will see those pools disappear quickly in the next few months.

For the life of me, I don’t know what you’re talking about

a pps pool cannot pay “more than any other pool”.

For the record, right now we are paying our PPS farmers (they can choose pplns or pps on 21chia) at least about 0.00025 XCH per TiB per day (it is not and it should not be fixed, it depends on network difficulty). So you’re taking a 5% fee by paying 0.00024 ? I think you should be upfront about that… Any PPS operation needs high fees and deep pockets to mitigate the risk of going bankrupt. That’s the way it always has been, there is no free lunch for farmers/miners.

I like PPS and I think it’s a great option for those who want stable and predictable payouts, but we shouldn’t mislead farmers about it being all perks.

A few pools we have investigated pay their farmers somewhere between 0.00022 to 0.000238 on average. Surprisingly lower than what should be paid to farmers, maybe that’s because offical protocol pools are too small, or maybe over-estimated netspace I don’t know. But we are not just coming up with an arbitrary number to say we pay higher. If the conclusion of our research says we pay higher, I think there are no reason we don’t mention it in our campaign. At Maxiopool, we have 1300+ members, expect 1400 soon to be paid with the new payout scheme - higher and more consistent payout is our goal here.

The expected xch/tb*day before fees should be roughly the same for the pool as it is for the entire network (edit: actually 7/8ths of solo expected, as 1/8th goes to block farmer). That’s going to depend only on netspace/difficulty. So if I understand all you are saying here is that from now on everyone will get that regardless of luck, whereas before there was times where we’d get a block and rewards would go up for a while.

Exactly. Less exciting for farmers who want to see block notifications. But in the end of the day, only what pays better that matters.

One last thing came into my mind, the final payout rate differs from farmer to farmer. Because some farmers can have higher Stales and Rejects which in turn affects their daily profit. These values can be easily tracked on the dashboard.

I’m personally very happy I joined maxiopool as my first pool. I did a little bouncing around to check out some larger pools but quickly came back to maxio for better returns. I’m all about that steady per share farming based on netspace difficulty rather than what blocks were or weren’t found that day.

For somebody like me, the average farmer/miner, paying 0.00024 per TiB per day is fine.

For the talented crypto enthusiast, who goes to the length of scanning and observing the real Chia transitions, 0.00025 per TiB per day, it is not (as there is no gas fee to add on top of that). 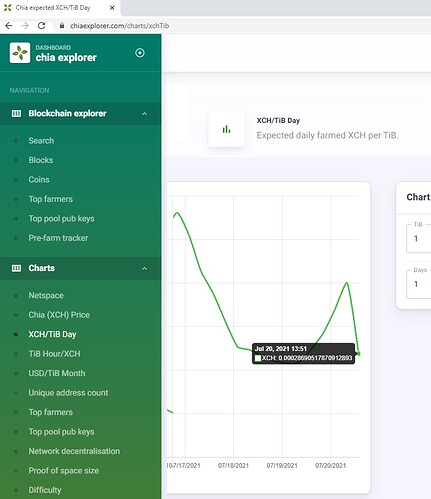 I started with Maxiopool once official pools began and am happy with how it has been working. I have not tried other pools however to know if I am where I should be. It’s a difficult space to differentiate yourself in, and I think they are managing to do so.

I have around 1100 plots at the moment and increasing now by about 135 / day. I got 0.028038 XCH yesterday from spacepool, so almost similar. But that is one day performance, let’s see overtime how the pools compare.

maxiopool will always pay less than any other pplns pool, you will never get a higher payout with a pps pool in the long run

We went with FPPS model because we believe this is the fairest and highest paying model for Chia farmers. At Maxiopool, farmers do not get penalty from internet outages, PC restarts, where they do with PPLNS system as those systems take minimum 24 hours to pay you at full rate. Also farmers are not fighting each other for shares, how do farmers know that they are getting the correct % of share in the pool, there is no way to measure that. So no transparency issue that many are talking about here with FPPS model, you simply get a flat rate payout. With ETH farming we found Sparkpool (PPS+) pays the best, so the intention here is to give Chia farmers options when choosing a farming pool by building a Chia equivalent for the community.

FPPS = PPS, for chia, so you should just refer to it as PPS, so it’s clear

Sparkpool does not pay the highest, stop spreading misinformation

Looks like I wont be able to convice you for anything I have said. But I wish you all the best with your choice of PPLNS pool.

I am trying to understand the pools here so ignore if some questions are silly as I am new to pools.
Don’t you think that the penalty for being off line is fair, as if a farmer is offline, then the pool looses a chance to win as the plots of that particular farmer could have won a reward so everyone in the pool looses out as that particular farmer is offline.
Also if the pools does not continuously check the status of the farmer, then how does it know the size of the plots of the farmer in real time.

About transparency int he pool, as far as the pool is giving a payout equivalent to a fair share ( which can be calculated on chia explorer or comparing against competing pools) a farmer can simply move away. So if a pool is cheating regularly then it won’t be left with many farmers over time.

Hi hawamahal, I should be more clear with the penalty I mentioned above. When farmers come back online after a period of outage, it takes over 24hours or longer to restore their share in a PPLNS pool, but with Maxiopool we are paying at flat rate, farmers are earning full rate the moment they come back online. Regarding transparency, there are people building auditing tools but until we get there, IMO it is not a simple task to verify, plus the result can be manipulated to attack other pools, make sure you read from trustworthy sources. We like to take out all the guess work and pay farmers a flat rate.

I think PPS, FPPS, and PPLNS need spelling out. So here is my understanding.

PPLNS: Pays out for the percentage of accepted shares leading up to the current block won. No blocks won, nothing paid. Your rewards are determined by the number of blocks won and your number of accepted shares compared to other farmers in the pool. There is a trust given to the pool that it is actually dividing the rewards between farmers properly since it can not be publicly audited.

PPS: Pays out for every accepted share regardless of blocks won. Maxio calculates each share value from a base payment determined by total netspace difficulty then adds a farmer reward which varies based on blocks won to adjust if the pool is over or under paying maxio current PPS. It is a more steady return rather than depending entirely on block luck.

FPPS: is the same as PPS but it removes that farmer reward variable part so all share values are calculated from the total chia Netspace. This is what maxiopool is transitioning to. This is the steadiest way of farming chia with no block luck variance, and not dependant on blocks won in any way. It also means farmers are not fighting for pool space rewards. A farmer with 1PB shared gets the same reward per TB as a Farmer with 50TB if they have 100% valid shares. For people that don’t understand how this can work, the pool is covering the costs of block luck variance. This means they pay out of pocket when luck is low, and gain the excess when luck is high. it all averages out in the long run and is the easiest way for farmers to know they are getting paid properly. Farmers can see their shares and know what the value of the shares are.

I’m sure I must have missed some things or might be inaccurate in others since I’m NOT an expert but I wanted to try and spell out at least my understanding of the payment systems. Please feel free to politely correct anything I got wrong. Also, keep in mind that farm space shared to all pools is an estimate based on partial shares in a given amount of time. It may be high or low at any time but does average out close enough over time. Chia pool rewards are not a hyperprecise system, there is a lot of estimates and variance in the system.

I am curious how often the netspace difficulty will update for determining share value? Will it be whatever the current blockchain shows when shares are accepted? or a daily/hourly average? we have seen some pretty big shifts in Netspace although overall not huge, it’s still enough to effect payments.