My plotter drive died, need a new one, what should I get?

I used a western blue 500gb drive to plot my 36 TiB farm last year with my gaming PC and it’s been cranking along making a small amount of chia. I picked up another 16TB drive on amazon’s thing yesterday and went to start plotting again but my plotter drive is dead. Crystaldiskinfo said it’s been at 0% for awhile but it will only mount intermittently and I can’t format it or do anything with it.

I’m just using my gaming PC to plot and farm and I’m not super concerned with ultra fast plotting, I think I was getting 3-4 done per day when I created my hobby farm.

What’s a cheap, durable drive that would work for me? Thanks 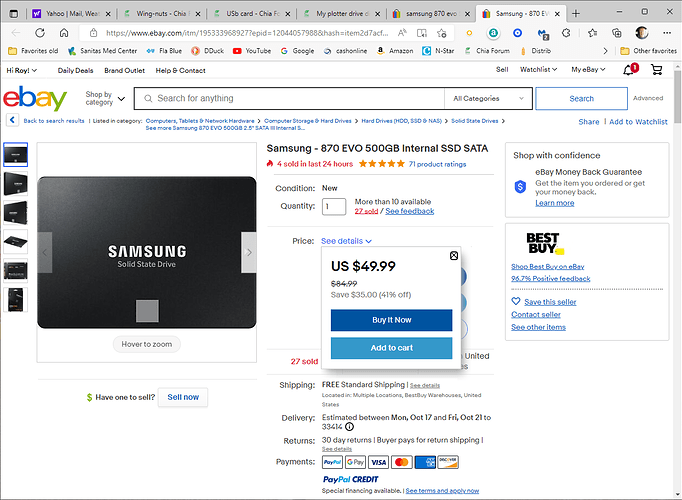 Save the environment. Learn what an HBA is and buy the drives for next to zero and get an HBA and cable. Feel good about it. Chia is supposed to be green. Start with the hardware.

Seen a lot of really goo deals in the US on SSDs this week. M.2 or SATA?

M.2 is a form factor, that can be SATA based or NVMe based.

I believe that @Fastskiguy is seeking a 2.5" SATA drive, based on his Amazon link in his initial comment.

Even if his motherboard has an available NVMe slot, that type of drive will cost a bit more, and @Fastskiguy wants something inexpensive.

The drive that @drhicom is recommending looks to be as affordable as they come, and for a reasonably good drive.

My only concern is will that Samsung drive slow down, in any significant way, from running Chia plotting. Because when a SSD’s cache runs out, then depending on the drive, they can take a huge performance hit – and Chia plotting will consume a drive’s cache.

Would that matter to @Fastskiguy?
Maybe not, because he wrote that he was getting 3-4 done per day, and is not concerned with ultra fast plotting. If he is good with that, then that Samsung drive should be fine.

If he was looking for M.2 I was going to point him to Microcenter. Idk if the sale is still available but they had the 500GB Inlands for cheaper than that Samsung drive on sale the other day. Got a notification on SlickDeals about it.

Edit - Scratch that. Maybe they were SATA drives…

A little more expensive, but will last forever, and it will keep @MisterSavage happy as its used equipment

I actually used to plot with a Raid 0 array of the 200GB version.

Samsung is always a good choice. However, if you can (your mb is capable, or you can buy an extra PCIe-to-NVMe adapter), NVMe is the way to go.

Although, stay away from Sam QVO series, as that is slower, and has much lower endurance (potentially like your WDC Blue). Basically crap.

If your CPU is not supporting PCIe v4, there is no point to consider the latest Sam NVMe drives (yes, TBW will be higher, but that’s it as the rest will be PCIe 3 speed constrained).

Also, my understanding is that Sam SATA 870 doesn’t suffer cache exhaustion, as that flash mem runs around 500MBps. On the other hand, 970 Evo Pro may not have flash that can sustain 3+ MBps (NVMe specs), so it compensates with a small cache that is good enough for everything else but plotting.

Thanks for all of the excellent suggestions guys! I ended up going with the Samsung, 48 bucks on Amazon! As for the environment , it’ll get use holding games once the plotting is done, it’ll have a “normal hard drive life” fwiw.

The Samsung 500gb is what I use for the windows boot and have chia installed.

The Samsung 500gb is what I use for the windows boot and have chia installed.

I think that I have that same model, in an NVMe format.
It is plenty fast for booting and running Chia. But I am not sure about how it would perform for plotting?

That isn’t saving the environment. The drive you bought has to be replaced with a new manufactured one. Not that you should burn in hell for doing it. But certainly the guilt should keep you awake for a few nights at least. Every plot, this should be a reminder of your choice. It’s about the collective “ill effects” of buying new. New this.

He is just using one that has been sitting on the shelf brand new for years. Do you wash out your old beer bottles, I saw you buy coffee and throw away the plastic cup.

That isn’t saving the environment.

Suggestion…stop eating (new) food (garbage bin only), buying gas, or using any electricity. In fact, don’t buy anything, except from the thrift store…plus natural earth burial to complete the process correctly, and environmentally friendly. Just saying…

Nobody can look in the mirror so your responses are predictable. You have a home full of new hardware farming Chia. You are beyond the point of no return. New entrants? They can certainly do the right thing. They need to have some independent thinking however. Don’t follow the mistakes of others. Buying new for this venture should given anyone pause. If the value of Chia and ROI doesn’t do the trick then consider how manufacturing works. You create new, when supplies run low. When we buy drives, supplies need to be replenished. Simple math.

You have a home full of new hardware farming Chia. You are beyond the point of no return.

Truly comical answer. You have no idea what I have in my home FCOL.

That isn’t saving the environment. The drive you bought has to be replaced with a new manufactured one. Not that you should burn in hell for doing it. But certainly the guilt should keep you awake for a few nights at least. Every plot, this should be a reminder of your choice. It’s about the collective “ill effects” of buying new. New this.

Is the “you” in this directed towards me? Sweet little tree hugging me??

Not a tree hugger. I come from a family who lived off killing trees. The reality is enterprise grade hardware, used, can last many lifetimes over. This is what Chia farmers should be looking at. How to make use of that hardware for this purpose. It’s not that difficult. I suppose as consumer grade hardware starts to die, then the transition or “I told you so” moment happens. Nobody should ever claim something until if fact that “thing” is proven. Can shucked USB drives survive Chia farming to an ROI? Can Seagate actually last long enough to get a decent ROI while Chia farming? Pure speculation and wishful thinking.

To the OP, the fact is this. Had you gone enterprise, you wouldn’t have a dead drive needing replacing. Sure sas can die, but you are doing the drive a service. It was meant to be run into the ground. Killing enterprise hard drives is a more noble existence than killing consumer hardware. A sas drive deserves the opportunity to give a full life of service. Truth spoken.