I’m probably one of many-many-many poor plotters here, who ask the same question about why their machines being ridiculously slow. I honestly read many threads in this forum and made extensive googling, but still couldn’t figure out.

My machine configuration is following:

I initially tested the setup by running single plot job (4t/4g/128) - it finished in ~6.5h, which sounds pretty fair.
I figured that I should be able to plot around 20plots/day (2TB/day), which is confirmed by other people with similar config.

I started to try plot in parallel using plotman, with following settings and attempts:

Whatever way I attempt I don’t even come close to 20plots/day. Maximum is around 8-10.
What am I doing wrong?
Can anyone help me to figure out the right way or give any hints?

P.S.: I feel like there is certain bottleneck in my NVMe temp SSD because of SLC caching and low sustainable read. But is it really that bad? People get nice numbers even with SATA.
P.P.S: I’ve heard an idea that XFS will be faster. Will it be drastic?

when you did your initial one plot test, that had full cpu with boosted clock. when you run more than one its just core clock speed so will always be slower. the true test of time is 2 in parralel.

P.S.: I feel like there is certain bottleneck in my NVMe temp SSD because of SLC caching and low sustainable read. But is it really that bad? People get nice numbers even with SATA.

I think so, running more than 3 plots at the same time on the p2 will see a drastic increase in plot times. I has the same with the transcend 220s, running 4 plots the times went up to 34K seconds and beyond.

Staging to an external ssd…I’m not sure but I don’t think that will do you any good might even slow it down.

Best thing would be to add another nvme and run 3 plots on each, that should work. You can try out the plot times if you run just three plots on the P2 and see what you get first before buying.

Other things are, the trim settings and bios updates but i’m guessing you already tried that.
Also, as I found out default settings in Bios can be utterly stupid, so you should check even when not overclocking.

I initially tested the setup by running single plot job (4t/4g/128) - it finished in ~6.5h, which sounds pretty fair.

You did it right! First step is to test a single plot to see if there are any major bottlenecks. That sounds about right.

So it looks like you are hitting a bottleneck with multiple plots. Unlikely to be CPU if you are only running parallel plots proportional to the number of cores. That, to me, points to the disk. Have you looked at the perf characteristics of the plot drive, looks like it is “2TB Crucial P2 M.2 NVMe (CT2000P2SSD8)”?

you have a bad nvme drive you are trying to plot with: 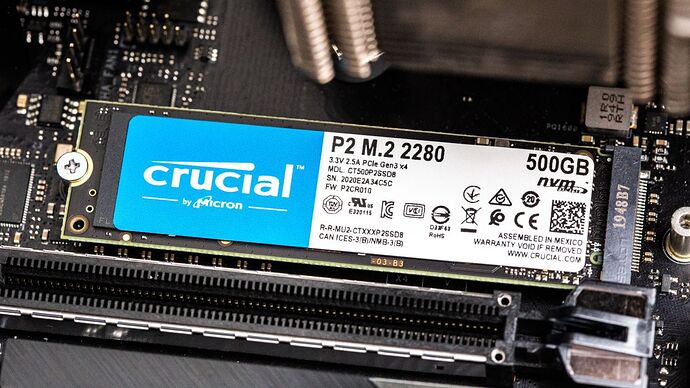 i have one of those too - the Rocket 2TB NVME - the sustained write performance is not there - write speed is cut by a factor of 4 as soon as the cache fills - see graph of Samsung 980 Pro under sustained write performance - the 980 Pro performs at 4x the speed. 1TB Performance Results and Conclusion - Samsung 980 M.2 NVMe SSD Review: Going DRAMless with V6 V-NAND (Updated) | Tom's Hardware

Hi ,
I have very similar setup with 2 differences,
motherboard is Gigabyte B550M and 2x1TB samsung 980pro nvme.
2 x16GB ram 3600.
1 x1TB samsung 970 QVE as boot disk (i intended to use it as temporary buffer before copying plots to external USB3 hdd) but it was extremely slow, so i send plots directly to external hdd`s, 2 of them in parallel to maintain at least some write speed.
The nvme drives are connected to MB m.2 slots and PCI express bus is configured as 4x4.
On average a get 24 plots per 24 hour’s, putting 3+3 (3 per nvme as is 1TB) with 15-20 min staggering and after phase 1 I put 2 more plots (1 per nvme) so maintain 8 in total as max number.
The CPU is totally capable of sustaining this amount of plots and the only real bottleneck is buffer drive ( i need faster 1TB sata ssd for 8-9 plots finished plots).
I have 3 possible causes for your situation:

I hope you find this helpful…

You also need to look at the temp of the Crucial NVME. I’m running the P5 version and they get hot and throttle down speeds. I had to put a heat spreader and a fan directly pointing at it. You can use Crystal disk info program to monitor your drive temps. My temps were running up to 70 deg C under load and now they are down to 45 deg C.