Earlier in the year, I was losing my wireless connection every 2 or 3 days. To catch it at a glance, I was pinging google.com

That went on for several months.

Yesterday, google.com stopped responding to pings.
I wonder if my 10,000,000+ pings made a notation in one of their logs, and they decided to block the protocol?

I now ping my internet gateway (one hop upstream from my cable-modem).

I also set my WiFi to automatically re-connect. Yet, it would go down and I would have to manually connect it. 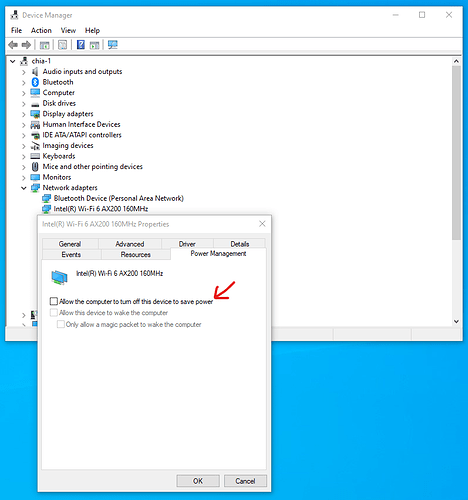 It was enabled. Apparently, that setting is not part of Windows Power Plan.

I unchecked it.
I no longer drop my WiFi.

I still leave the pinging going, because once every week or so I stop getting block challenges / lose sync. So the pinging tells me whether or not it is my internet connection.

Go get a box of cable and make a direct lan connection, you will find a way to route the cable…

Untick that box on your USB drives and USB hubs and hosts that hold chia disks too, if you haven’t already.

Untick that box on your USB drives and USB hubs and hosts that hold chia disks too, if you haven’t already.

Thanks. I had already done that.

Go get a box of cable and make a direct lan connection, you will find a way to route the cable…

No can do. Too complex a path to make it worth the effort.
I would love to have a wired connection. If it were not such an ordeal to snake a cable to my box, I would.

No can do. Too complex a path to make it worth the effort.
I would love to have a wired connection. If it were not such an ordeal to snake a cable to my box, I would.

Good quality Poweline Adapaters are extremely reliable and fast these days - preferable to WiFi any day of the week.

Good quality Poweline Adapaters are extremely reliable and fast these days - preferable to WiFi any day of the week.

I have one concern, and one issue, using power-line networking.

I live in an apartment building.
My concern is whether or not I will be risking sharing my local network with a neighbor who might be using their power-line for networking.

My issue is that, many years ago, I could not get a power-line network to work, which turned out to be because I was using an uninterruptible power supply (UPS) to protect my equipment.

It turned out that the UPS was filtering out line noise (and I guess that anything other than the clean sine wave is considered noise). I do not see a way around that problem, other than to not use a UPS (which I will not do).

If any component is connected directly to a wall outlet, then a power surge can use that component to fry all other connected components.

EDIT:
And if there is a power outage, you lose your network.

With my UPS keeping my equipment up, I am not affected by power outages, unless they last for 30+ minutes.

Yes, a UPS will likely block the layered powerline signal which is a low level protocol superimposed onto the line voltage. Simply connect the powerline adapter prior to any UPS or line filter - they have their own protention built in according to the powerline standards.

Also according to the powerline standards, they have encryption built in, and often 256 or 512 bit these days. You can set your own passphrase on this or leave it at default (I usually set my own).

Things have moved on, a lot, in the last 2-3 years for powerline systems. If your experience was based on years ago, I’d recommend you look again.

An item that I just added to my previous comment:
"And if there is a power outage, you lose your network.

With my UPS keeping my equipment up, I am not affected by power outages, unless they last for 30+ minutes."

And one more issue I have is that my motherboard allows for no more cards. I have all available lanes used. Not all slots. There is some PCI Express lane juggling formula. So although I still have room, physically, for another card, my motherboard will not recognize it.

I learned that when I looked into upgrading to a 10 gigabit network (I have 2.5 built-in, which is good, but 10 gb is better). That is when I discovered that I cannot add any more cards. I had added a USB card, and that took up my last lanes.

And due to space constraints, and a jungle of cables, getting into my boxes to change/add components is a headache.

I will have to stick will wireless, which is now behaving itself. If I ever get the energy, I might try to snake a cable. But that will also require me to buy a switch. Right now, I have only 2 computers on my Chia network. I connect them directly with an Ethernet cable.

If I were to run a cable to my cable-modem, then I would have to use a switch. Not a big deal. But it just adds to the list of to-do items, and with my WiFi behaving, it is hard to pull the trigger on such an effort.

Do I have to fly to Jersey to snake a cable???

Run, walk, or ride a bicycle.

live in an apartment building.
My concern is whether or not I will be risking sharing my local network with a neighbor who might be using their power-line for networking.

I had old ones and that happened, pita and i stopped using them.
They apparentky had tech to stop it, but it never worked.

Hi,
On the same topic - there is a tool which might be helpful, which checks the connectivity to the internet or to another custom machine & port: GitHub - ageorge95/pyConMon-Connection-Monitor: GUI & backend written in python to monitor connection to a certain server

That tool was built by me as I wanted to know my connection status over the night and thorough the day as well.

If you like the tool, please drop me a star on github

What part of python is needed to run this app?

Hi,
I have added a requirements.txt file - there are 3 libs that need to be installed, besides the standard python libs.

If you need additional details let me know and I will gladly help (I may provide a delayed answer, but I will give you a response for sure).

Wait you’re really farming over wifi. Please god tell me it’s Wi-Fi 6 at least. So u can get similar to 1gbit speeds… is everything a farmer does encrypted? Replying to challenges?

Cause… hackers delight if not ill wreakon. I’d never let my chia over the air like that. U must have huge

.
Wired is a must not only for security. But speedz.

People I think have the wrong Idea about how Wi-Fi really works. And the craps shoot it is that your frames arrive to the correct wap.

its not about speed @Bones. i can get faster than a gbit with wifi 6. theres way more to it than just “speed”

Generally speaking, wired networks are always faster than wireless ones because of the direct access to the network given by the cable. Unlike wired networks, WiFi connections also suffer from signal interference

With the Cat6 cable, the wired connection can go as high as 10 Gb/s, which can never be achieved with the WiFi network. That being said, the speed of the WiFi networks has grown significantly throughout the last few years, and the WiFi connection is enough for most of your daily tasks.

a wired connection is vastly superior always. in all situations. truly its a must especially if u have a good amount of money spent on your rig. why would u take such a silly shortcut when you have money involed

Wired networks are considered more secure because access to wired networks requires physical access to the cable. With wireless networks, a person outside of your apartment or office building can theoretically access your network.

However, wired networks also require firewalls and security apps to be completely fireproof. Likewise, wireless networks can be totally safe with the right configurations and network security systems. The encryption technologies like WEP and WPA2 can protect wireless networks from violation.
wich are easily hacked

Wired internet has much better bandwidth than WiFi networks. This is because the data moves directly when the devices are connected via an Ethernet cable. With WiFi, there is a certain loss of signal expected when the signal travels through the air from one point to another.

The quality of the connection is determined not just by the speed or bandwidth but by latency as well. Latency is defined as the delay it takes for the traffic to reach the device from a destination. Wired connections are much better than wireless ones at avoiding latency.

SHOULD I CHOOSE WIRED OR WIRELESS INTERNET?

If you are a casual internet user that values convenience and uses multiple devices, including a smartphone and smart wireless devices for home, such as a robot vacuum cleaner, then Wifi is the best option for you. This is also true if you have smart devices, such as IoT, such as smart TVs, or smartwatches.

A wired connection is the best way to go for you if you are a gamer, are streaming from your PC, or are using a single desktop PC that has everything you need in one place. You should also think about installing an Ethernet connection if you are constantly sending large files

When you quote something, provide the source to give credit to those that wrote that. Otherwise, you just pretend to know something, why you are basically blindly repeating potentially garbage. - https://nassaunationalcable.com/en-in/blogs/blog/wifi-vs-wired-which-one-is-better

By the way, WEP was cracked 100 years ago. That shows the value of what you copy.

Wifi is fine for chia, you show me where they say its not.