So I am running a Supermicro847 with 1500 plots on 18 drives all SAS via a 6gbps sas controller running windows 10 - 32 GB ram. It also has a windows VM running within it with a flax setup farming these plots as network shares.

The missed challenges, which I am monitoring via farmr, can be between 100-1000 typically, and response times can be 400 seconds max with 7 seconds average.

Is this just too many plots on one machine?

I have on HP DL380p Gen8 with two CSE846 connected externally via SAS8088 cables those are 48 drives and 1714 plots with a longest lookup time of 1,4 seconds in farmr at the moment.
As OS I use ubuntu server 20.04.
I would say farming via network shares is not the best way to do it.
I would rather suggest to use the suggested setup with one central farmer and all other nodes to be dedicated harvesters.

I am sending my Supermicro back, it hasnt performed well from the start. I have a number of Dell servers which I might use instead. Thank you for the advice.

Your not running your o/s on hdd? that’s what buckled me, fine since moving o/s to ssd.

No, the OS is on SSD, the rest on SAS in a proper array. I think its a bad server, I had issues with it from the off. Its going back to the supplier, so I will update once I switch all the disks back into some netapp disk arrays I have and go back to a dell. Might try a 415 as a farmer. I only switched to the SM847 to try to save power. I wasnt banking on it being unreliable and a lot of hassle.

I’m getting 164 plots on one 18tb WD USB drive, that would be 30 hard disks. What type of disks do you have all that on?

Switched to a Dell R415 and one Netapp 4246 array and no issues, no missed challenges and no problems. The SuperMicro unit I had I think had some hardware problems.
450W with 1500 plots so 0.3W/plot

You have 18 drives, 10TB each with 100 plots/drive. Drives (when active) take about 8W. As such, you should have 8W / 100 plots = .08W/plot just for drives. That would imply that the rest of your setup takes 300W. Kind of high (unless you are also plotting). (Unless that power usage was during the startup, but I would assume your HBA is doing a staggering startup, so even at that time it should still be on average around 0.1W/plot.)

It’s a Dell R415 Dual Opteron, and a Netapp 4246 fully populated (24xLFF hard drives - 6 are lower capacity ones I am currently copying plots to larger ones). There are two network switches on the rack a 1gbps one and a 100mpbs one which also has a backup internet connection via 4G modem.

This is the power consumption as measured by the wifi plug that it’s connected to. 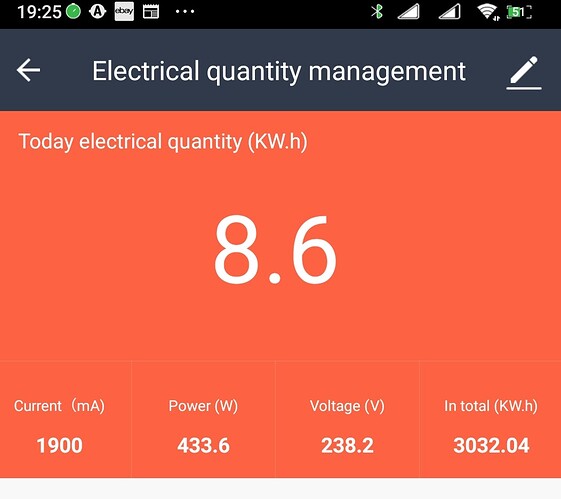 I am not plotting at the moment.

Just look at that box as 2x CPU, stuff, and drives.

Your drives will take N x 8W of power. Your stuff ~50W, and your CPUs consume the rest. It looks to me that those old CPUs have rather bad power management (as those are server grade, so are actually meant to churn stuff 24/7, not sit idle).

If you are not plotting, I would remove one CPU (100W). If you are not doing anything serious on that box, I would look into getting a low power CPU. For example 4100 series (may be supported by your box) has it down to 35W per CPU, still with 6 cores:
https://www.cpu-world.com/info/AMD/AMD_Opteron_4100_series.html

I have one Dell T76100 with dual 12 core CPUs, but that sucker is basically a space heater, and power cord melter, so I only use that one for plotting.

On the other hand, my harvester initially came with 120W or so Xeon CPU, and I replaced it with 17W one (it was around $20 or so). Works great as a harvester (no other tasks on that one).

Your VM that runs flax may be still doing OK with just one/two logical cores dedicated to it. Logical cores are shared resources in VMs, so if one is not used, the other VM/host can use that power. On the other hand, when all needs that power, it will settle down on the split you requested in your VM setup (e.g., just 2 logical cores).

Good advice. I can shut off one processor, and/or throttle one or both, it might help. The next phase for me is just seeing how low I can go power-wise, but using proper kit, as I began thinking I would go with the crazy usb drives setup and then got into rack mount kit and have been having a blast playing with all sorts of server and disk arrays.

Sorry, I used CPU when referring to VM setting. That term is rather ambiguous, and "logical cores’ remove that ambiguity.