Plotting with Madmax in Chia GUI

Today for the first time in quite a while, I am plotting again

Bought a new 18TB hdd and thought, let’s try the integrated MM plotter that is now in the Chia GUI.

First off, you can’t view you farmer key while in the plotting screen, so remember to copy that first. If you go back and forth the settings go back to default. Same goes for the Plot NFT name (last question! in the list).
Secondly, you can input temp1 and temp2 directory but it doesn’t explain what these do, so for new users they just have to guess I suppose. For me, I had to go to the Madmax github page to have a look which was which again.

Now I created a plot que with 100 plots, realized I made a mistake (wrong NFT, because I guessed and guessed wrong) so I want to stop the que. Well, you can’t… So here we go deleting 100 plots one by one from the que.
(btw, if you delete a running plot from the que you still have to clean up the temp files by yourself. This is not mentioned, plotting just gets stuck).

So back to Plotmanager that has a simple but effective GUI that works great with Madmax and also shows you the output so you can see what’s happening. 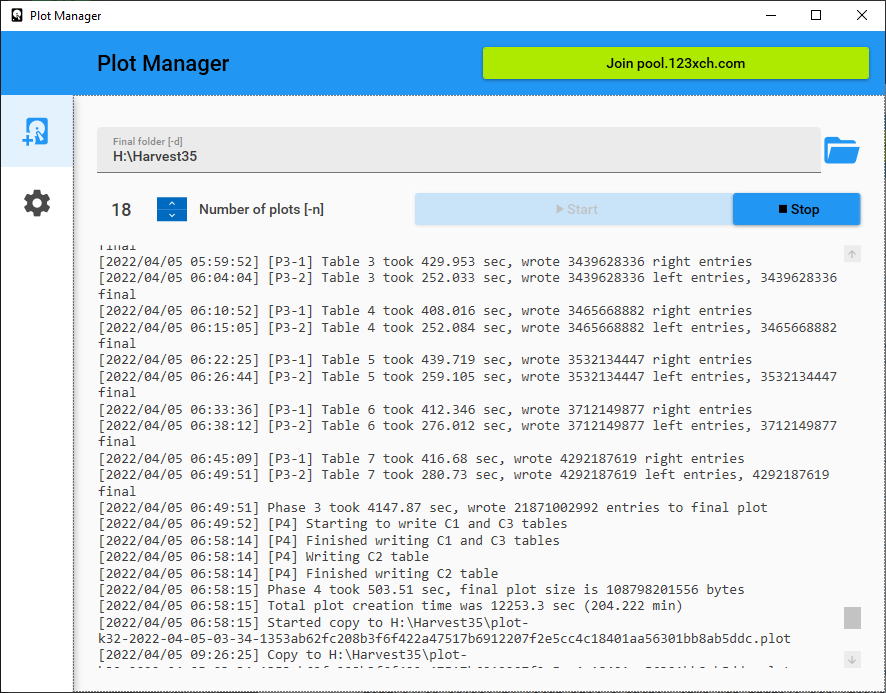 Most all issues you are having are solved by using the MadMax through the CLI. Using the plotting GUI is painful and prone to errors from missing/forgetting some option available in the convoluted menu structure IMO.

1) Install whatever version latest Chia GUI and enter your keys
2) Open Powershell
3) CD (to the Chia_plot.exe and Chia_plot_k34.exe location) > currently that would be:

So simple, so easy, everything is on one command line for adjustment. Go for it!

haha yes I agree with you and that is how I used madmax for most of my plots.

Certainly justified. For some tasks, a GUI is fine. But for things like MM, and all its parameters (applied to regular plotter too), it just makes it a disaster to configure. How it was designed in the Chia GUI is beyond bad IMO from an ease of use perspective! I tried a couple times, always screwed up something, and then went back to using the CLI with the new plotters (k32 & k34) from the V.1.3.x releases.

Just to let you know, I’m not having any issues once you entry the keys etc it keeps them in a config.yml file to keep track. And when I launch it remembers what the plots count was from the last time. I just wanted to know, when he might come up wit an upgrade. But I know were were texting to the first guy.

For others reading this thread later, the Machinaris WebUI for Chia has offered plotting with Madmax and Bladebit since last summer. The WebUI allows remote control of plotting, which invokes the relevant CLI plotting scripts.

I open a command prompt, and run the .bat file, which includes a first line that changes to the madmax directory.

When my hard drive is full, I edit the .bat file to specify the new destination (the new hard drive location).

I believe that could also be accomplished with some %1% variable (or something like that) so that you can run your .bat file with an argument that specifies the destination drive (negating the need to edit the .bat file when using a new drive).

I also keep a copy of my .bat file on a different drive. After the head scratching of getting all of the parameters straight, I do not want to figure it out again, if the drive fails and I lose my .bat file (or if I accidentally delete my .bat file).

Everything comes down to priorities with software development.

Anyone plotting is an “advanced” user because they are farming, so building a GUI interface for plotting is probably not high on the priority list. The Chia software and plotting is still rapidly changing so the GUI today might quickly depart from each plotter’s options, leaving us complaining that the GUI doesn’t work right or support every option.

Tasking someone to make a GUI for plotting right now probably doesn’t fit with the rest of the Chia development schedule. While making plotting user friendly may help with Chia’s adoption, there are more important things to work on, especially with several other plotting frontends and managers in existence today.

I have some super simple Bash scripts for Linux, and even some .bat files for Windows that help automate plotting if you are interested.

I would think that it would be really helpful to show a recommended command line for a given setup in UI, so one could copy that and start experimenting. Sure, a working UI would be nice, but most of us end up running plotters by hand anyway. Stil, having half-broken plotting UI is not really helping.

Stil, having half-broken plotting UI is not really helping

Exactly that. Half-baked is just waste of time.
It’s a few details, but it makes all the difference.

First question should be OG or NFT.

Few more text balloons to explain things like tempdirs etc, or just one info text with a short manual.

The only thing that really requires extra coding is the option to delete an entire que.