Poolharvest (dot) io STARTS cheating? …
This pool started OG pooling, and then switched to official protocol. In a few words, it’s a pool with the knowledge of operating this sort of services.

For a time, I was a user of their site too, my first official protocol block was won on their pool, etc…

Since a couple of weeks, they (just 1-person operation, I suspect) changed/modified/upgraded the website and the general view from the Launcher page, no way to know how many blocks won during 24 hours.

Since that change, users started crying/chirping some negative words on the site’s Twitter page that daily pays dropped (while maintaining the pool Net space size = 59.30PiB at the time of that change).

If you are a user of that site (while keeping an eye on their Twitter page), it’s quiet urgent that you “QUIT” that pool to save you from being dragged into un-wanted holes.

Check always the developement of the specific services, they can shift from bad to good, and adapt accordingly. 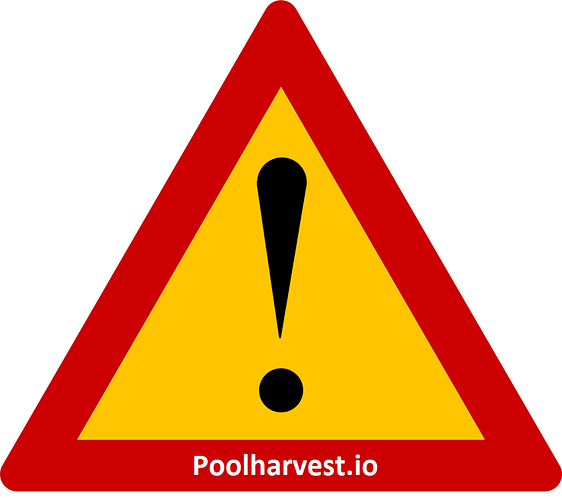 It would be nice to see more blocks, but other than that can’t see too much going on there.

In a more general sense: Is it possible to independently check (like in the explorer) all block won to pool X ?
That’s kinda needed I think

You have to check your launcher page again I think. The launcher page shows the last ten payments. If you click on the “blocks” which is in the upper menu, you can see the last 20 blocks and check them by block explorer. I can say I had a previous post about two pools which were spacepool and poolharvest (Comparing two NFT pools) I have received 30 % more from poolharvest!

The problem is that Pools smaller than Poolharvest report more wins (maybe complainers on Twitter got it right):
For example

It is quite sad to read that some people within the Chia community are still making big mistakes when it comes to comparing one pool to another. We have already addressed this topic way too many times on Twitter but it’s apparently necessary to repeat ourselves again.

First of all, accusing a pool of “cheating” because it is having a bad day (low luck) demonstrates how poorly informed some people are about how cryptocurrency pooling works, especially when these pools use the PPLNS reward scheme. Let’s take a simple example: as a solo Chia farmer, your time to win is estimated to 1 month with your current plots storage. If you don’t win any block during your first 30 days of farming then what is your conclusion? Are you going to keep on farming or just stop everything because you think that something may be wrong? What is being said here would suggest that the second option would be chosen. Now you can hopefully see how absurd this is. Pooling works the same way as solo farming, except that it’s on a larger scale. But the bigger the pool, the less noticeable the bad luck periods get. When you operate a small to mid-size pool, this single factor impacts your image much more because it can take hours for a block to be finally won, and you may imagine how frustrating this is when people are complaining about some non-existent issues. It is essential to understand that Chia farming, as crypto mining in general, is a long-term investment and that you cannot make any viable analysis of a pool’s performance based on a single day.

Let’s be realistic for a second. No one ever forced you to join a specific pool. Whatever pool you choose does not matter. All of the pools available out there are basically the same. They use the same structure and the same code base. How successful they are doesn’t depend on how much you earn from them because on the long-term, you’re basically going to to get the same amount.

Please make sure to know your subject before making any critical analysis of anything. Real proofs are what matters, not just a bunch of random conclusions you got from visiting a website where you didn’t even see that a “Blocks” page was linked in the header main menu.

In the long run, 1 month + it should all average out… Just because a bad day or two, doesn’t mean they are cheating.

@poolharvest I guess, you base your whole rant on trying to explain theory, that most of the people understand, and are sick of it being repeated ad nauseam. On the other hand, @ChiaMiner speaks based on his very limited time experience with the pool, what has again very limited value (if any).

So, clearly neither of you has any data to point to, other than he said / she said. I would suggest that you redo your website, and be more transparent, show more stats that will clearly show that you experienced ups and downs in the past. Being on this forum, and helping people out is another thing you can do to show that your pool is worth to consider. Pushing rants as above is just trying to talk from a high horse, and assuming that virtually everyone else is an idiot.

Unfortunately, for me not seeing basically any stats on your pool website means to avoid your service, and of course ignore your rants.

Not really. The time scale depends on the pool size. Also, any pool/farm may acquire some bias that will last for some time. Therefore, you should be able to normalize “luck” charts to get some clues. If you don’t see those “luck” charts, it is really a difficult process to quickly compare pools.

Therefore, we should push pool owners to provide as much data/stats on their websites as possible, and basically ignore those that run just one-page website stating that they are the best.

Since this comment, XCH added 10 BiP in 4 days. Pool Harvest lost 4 BiP. This should be happening, if miners are careful and watchful, when (any) pool starts hiding wins.

Let’s assume that they do want to hide those wins. The problem with that statement is that they only get 1.75 XCH, where .25 XCH goes directly to the miner (I think). Do you think that any miner would be happy with that .25 XCH knowing that they robbed him of his share of that 1.75 that he just mined and potentially other blocks that were mined by his peers? Wouldn’t you be the first one to report that problem? I would.

There are potentially two things at play here: 1. they just have a bad luck (most likely), 2. they have some software problems.

Nothing you can do about #1. However, if the pool is not transparent enough / not providing enough stats, you have not enough info to assess #2. As mentioned above, pools that have just one page websites with a couple of data-points there are not doing enough to earn your confidence that #2 is not the issue.