Question for the pool operators, how can you verify farmers are actually producing?

I’m asking this question because we’ve seen many topics and ppl who had trouble with their setups.

But still…no dice for some odd reason.
Another thing is reports from ppl saying that plotting with madmax was taxing the system to the point of screwing with farming operations.

So my question is, can you - as pool operator - be sure that farmers connected to the pool and getting partials are also actually performing correctly on the Chia blockchain?

Pools can see the errors but we do not know who is behind each Launcher Id unless users approach us first. I would say 50% of the support time is spent on helping them on configuration related issues since launch. Chia Network team really needs to do something about it, Chia client as it’s current state isn’t for everyone.

Our dashboard has stats to help user view the errors they are getting with a big Effective Rate number. Hopefully when they see this number getting low, they will do something about it either by checking their set up or contact us. 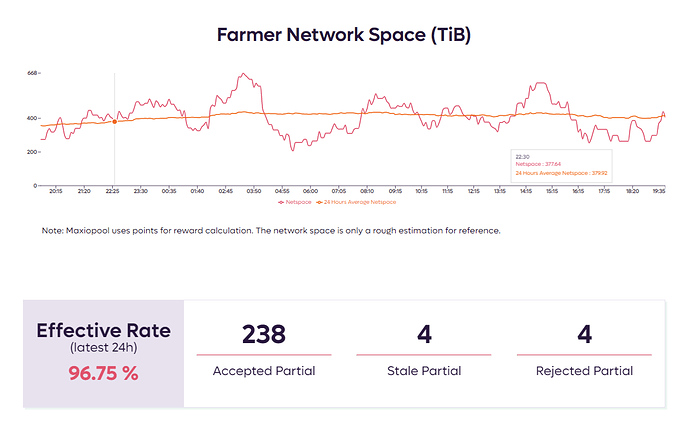 What is a common error in your clients setups? Anything in common between them?

A farmer could just respond to partials and never create real blocks if that’s what you mean (either deliberately or inadvertently)… But you are incentivized to create blocks by the 0.25XCH reward, so that kind of rules out a motivation to do it deliberately.

I had 100% valid partials while running madmax (100% CPU use) on my harvesters with spacepool. However, I noticed that the pool estimated my number of plots ~30% lower vs. my actual plot count (only pool plots counted). Perhaps these stale partials are not shown by their website?

Edit: In spacepool, they only show valid vs. invalid partials. How do you measure the stale partials?

Just curious, do you mean stale partials when running madmax on the same machine as the farmer (which is to be expected on a lower spec machine), or that there is something inherently inferior about madmax generated plots?

This is an interesting question!

My experience = started plotting with madmax (windows version) 50 days ago, been having ~16-17 days for expected time to win during this period but haven’t won any chia. Before using madmax, I was winning regularly, even more lucky than what would be expected.

It is up to the pool how to interpret that information. We had this feature planned very early in the days, some pool maybe just started catching up.

These errors are counted towards Stale Partials

madmax does a great job using 100% cpu and plots generated are just fine.

s when running madmax on the same machine as t

Thanks for showing us this in detail. I have no such errors in my logs. Never had any warning about slow lookups or something similar.

I think a valuable data point for a pool to show is how many plots you (the farmer) contribute to the pool and how many % of expected rewards you are receiving. That way the user can easily see if the calculated number of plots is the same as in CHIA gui/on the hdds and then take a decision if the pool is paying out rewards according to expectations or not. I was leaving spacepool due to this reason. It said that I had 30% less pool plots on my NFT vs. what I actually had and I had no way of understanding if I got paid the proper amount for my contribution or not.

I think the key for pools (other than % share of the total netspace) is to show in concrete numbers that they are not cheating its members.

PS. Spacepool had something similar to what I described above with the % luck vs. estimated time to win for each block, but now they have removed this and added labels such as “lucky”, “very lucky”, unlucky", “very unlucky” etc. I can only think that they did this to hide something. Why would you want to dumb down this information other than to fool people in you actual results. At least they could have kept the % alongside the dumbed down labels… Also, the per block luck level is meaningless if you don’t also provide the average luck over time…

PSS. Flexpool have “average luck” but it shows 47.7% (i.e. very lucky on average, see picture below) - is this true or are they making this calculation wrong? 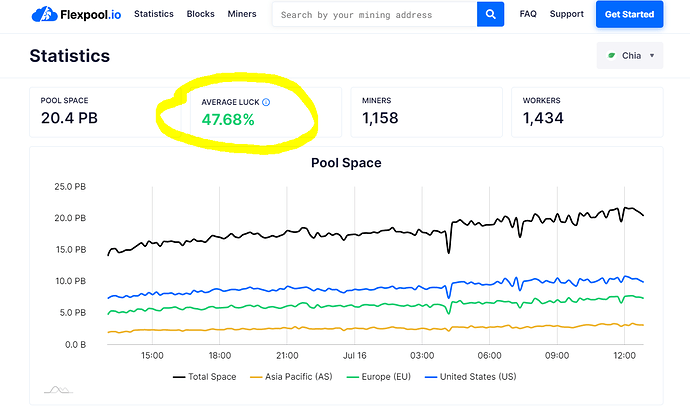 They also give the information that the total netspace is 35.8 EB (wtf?): 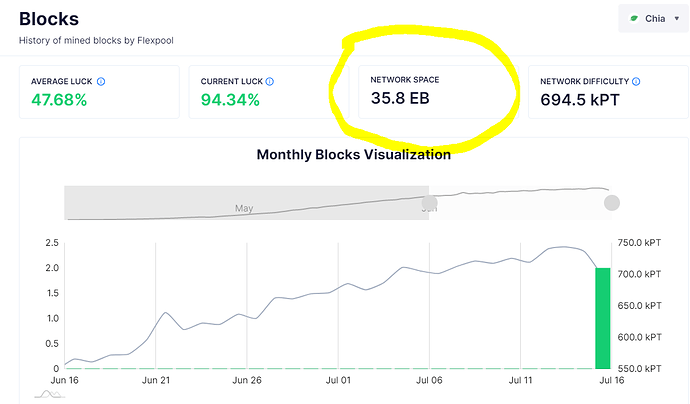 All this further indicates that the pool that can show reliable stats and how they are calculated (so that the users can verify on the blockchain etc.) will have an advantage vs. others. Right now I don’t trust any pool with my plots. Time will tell what pools are honest and competent vs. those who are not.

yes this is what I meant, more specifically towards unintentionally, but intentionally in the end is also a concern.

Main issue is as you describe it, can you be sure than when a famer has good partials, they are also farming correctly?

If they submit valid partials in time, wouldn’t that be the proper indicator that you are after here?

That’s interesting, but then 50 days ago it went from easy to impossible solo mining chia, all things equal hmmmmmm I would say that 1EB to 30EB is the cause effect of your lack of winning

What I know from personal is going from chia-plots-creat (chia-net ) to mad-max, that HPOOL accepts my plots 100% same-same. HPOOL has been ripped off so much that they now have deep detection models for fake-plots; ( 20% of hpools 15EB was fake at one time 3EB )

The vanilla chia-net doesn’t do much of anything for plot validation other than disk churning.

Hi somemoar, I have been plotting during this time so I was growing with the netspace so to speak (i.e. my % of the netspace have been relatively stable during the time netspace has been growing for ~1 EiB to ~30 EiB). I had 20 days expected to win at one point and 10 days expected time to win at another point, these are the extremes, but I would say that the average was around 16 days to win during my whole experience farming chia. In other words, my probability of winning chia any given day has been similar during this period.

is this true or are they making this calculation wrong?

They also give the information that the total netspace is 35.8 EB (wtf?):

Network space is in EB which is different than EiB

But still…no dice for some odd reason.

Looks like some pools turned off showing stales. Possibly cause on the backend their overwhelmed or they don’t like dealing with the complaints/inquiries. Two major ETH pools don’t show them either. So if your on one of them you could be missing that your losing a lot to stales. Looks like Maxiopool is showing stales properly from the screenshot btw.

I would think that most of the reasons a proof would be stale is the result of a bad configuration on the end user side. Since the pool really has no control over how talented or experienced the end user is, I don’t see why the pool would publish that number. You can’t fix everyone’s ability to keep their systems running at its best.

I would think that most of the reasons a proof would be stale is the result of a bad configuration on the end user side. Since the pool really has no control over how talented or experienced the end user is, I don’t see why the pool would publish that number. You can’t fix everyone’s ability to keep their systems running at its best.

Because people can’t diagnose problems when the pool is saying all is fine! Also certain pools are quite overloaded on the backend which is causing them to process submissions slowly which causes stales. Last night the Chia network itself had a small issue that caused stales.

I remember back when I naively thought that I could diagnose the health of my farm by use of a pool. It seems that I need to wait before pooling will be a reliable tool for such purpose.

I remember back when I naively thought that I could diagnose the health of my farm by use of a pool. It seems that I need to wait before pooling will be a reliable tool for such purpose.

Some pools do reliably show stales. Just because there’s a few bad apples or because the Chia network is a work in progress shouldn’t turn you off pooling.