Question for people who are using sata connections for their farming drives? How are you wiring up your power connections?

I’ve been having a difficult time nailing down an issue ever since I got my 17th farming drive connected. I now have 20 farming drives, and the issue has gotten progressively worse the more drives I have. Basically certain drives will go offline randomly every few hours, maybe coinciding with when a new plot is being written to the farm, but not necessarily the drive that has a plot being written to it. Another drive might fail. But maybe usually they’re using the same power cable, but definitely not always. Usually I can go into disk mngt and tell it to rescan the drives and they’ll come back online. The only exception to this seems to be the rare occasion when 3 or more drives go offline, and then I’ve got to reboot it for those drives to come back.

At first I thought there was something wrong with the 17th drive, but as time has gone by, I’ve moved drives around, wired the sata data to different sata controllers, swapped power supply cables, swapped power splitting cables, changed the port on the power supply it’s connected to. Everything just seems random with no clear pattern except for 1. The drives that go offline are almost always Seagate Exos drives. Not everytime, but usually. But I don’t think there is anything wrong with the drives in question.

From shucking Western Digital Elements and Easystore drives I have a lot of those USB to sata boards and power supply’s that came with them. I can connect the drives that seem to frequently have problems to one of these boards, and they will run rock solid as usb drives for months with zero problems. Doing this with at least 2 drives at a time, that are frequent offenders is the only thing that keeps things stable in the machine. If the drives were faulty I have a hard time believing they would behave perfectly connected via usb. But they do.

My next step was to reluctantly swap out the power supply, maybe go up to 1200 watt but I really don’t want to do that if it won’t fix the problem. Aside from this issue, computer has been rock solid, so I think the power supply is working well. Am I doing something fundamentally wrong?

Unfortunately, with HDs, the power advertised by PSU is a bit misleading. HDs need both 12V and 5V. Usually, the most of advertised power comes from 12V lines (and this is where GPUs draw it). However, a HD draws up to around 1A through 5V line. So, you need to check the PSU sticker, and check how many amps that PSU offers on 5V line. You should also check your drive spec sheet, to check the 5V usage.

As a reference, I have 650 W PSU here that is maxing out at 15A @5V. That means, that this PSU will not be able to keep 15 HDs running, when they draw close to the max through 5V.

The second thing is what brand / cert that PSU has. Usually, those with better names and higher stickers (Platinum, …) are made from better components, and are more stable.

It is recommended to use a 36 Bay server chassis like this, using 800W redundant power supply, good air duct and strong heat dissipation capacity. 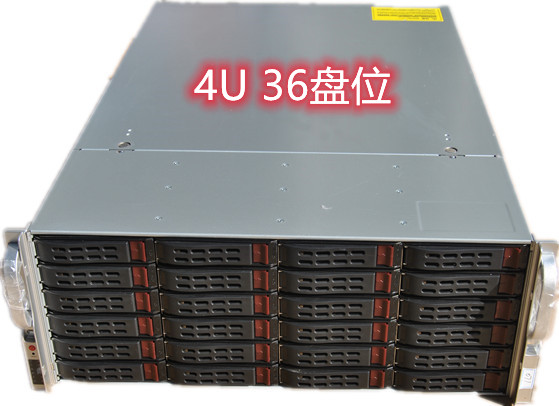 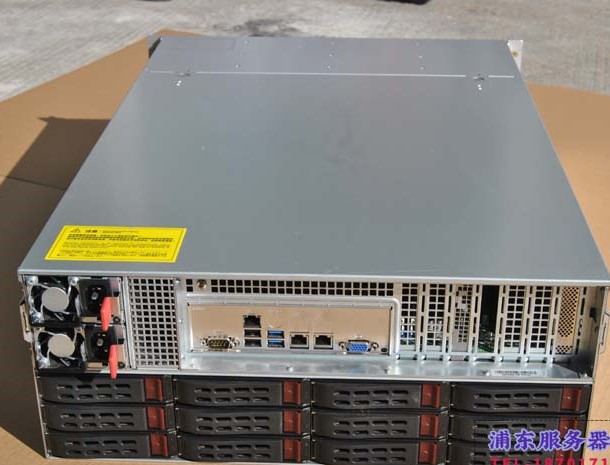 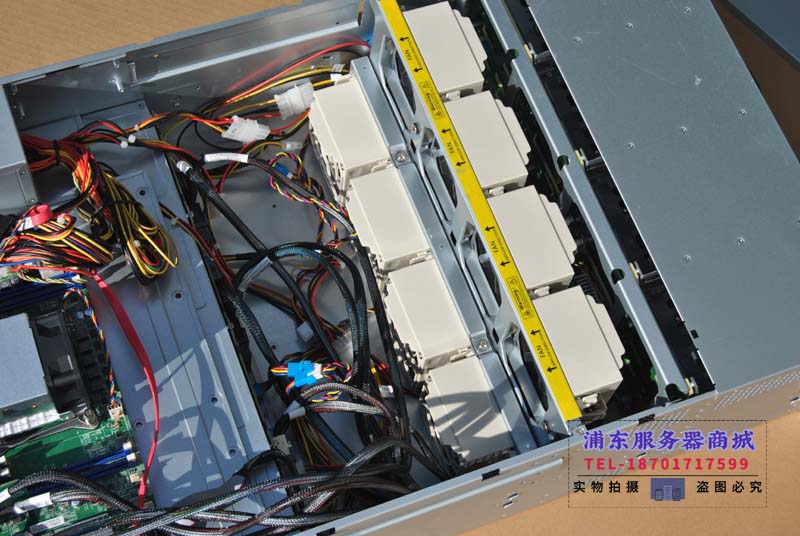 I’m using molex to 5 sata power splitters, up to 3 per power cable. So possibly up to 15 drives could be connected to a single power supply cable. They’re not currently, wired up like this, but that was my plan as the farm grew. Is that too much?

short answer: yes, but that is official
Most likely it should work out, personally I would not go more than 8 on a single psu cable though and that is still using molex to sata splitter because Molex can handle more current than Sata connectors can.

The other thing I’m thinking about is that maybe your cables are just to long? Voltage can drop too low if the cables are longer.

Note that (most) External USB drives are also still using 5V through the USB, so unless you use a powered hub, it still uses the 5V from your power supply. The external power is just 12V on those drives.

17 drives is a bit strange to give such problems though.
I am currently running 22 drives on a ancient corsair VX450 PSU with 20A on the 5V and have no issues. Then again one hdd is not equal to the other in specs so it might be that you are just overloading it on the 5V, do you have anything else connected to that system, like USB devices.

In an ideal world, but we don’t all have space for one of those.

Forgot to mention, If you want to go th USB route since you have all of those connectors anyway.
You can use these: 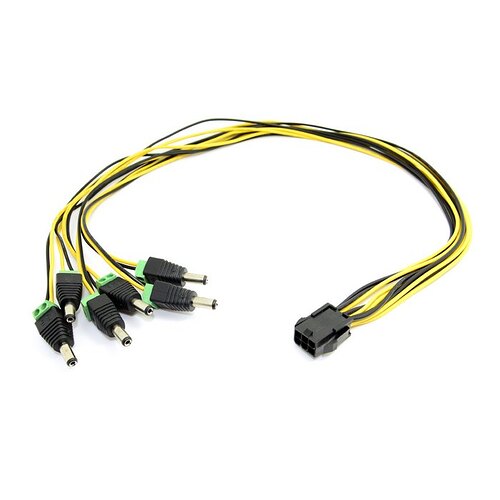 You can connect 6 external hdd’s on the pcie 6-pin (I know it says 5 plugs but it is 6)
If you then use a powered USB hub, that should solve any power issue and it saves dealing with all those loose power bricks from the external drives

I like that cable… to hook up those drives.

What’s the model number of that chassis??

There is no specific model, only that supermicro manufactures chassis for a Chinese cloud service provider, IDC machine room is off the shelf, and China Taobao 2000RMB.

This is a fascinating conversation guys, thank you so much for the replies.

To the fellow who recommended server grade equipment, I’m sure you’re right. But, I live in an apartment and I’m not rich. So, I’ve been trying to do Chia in such a way that it’s quiet, and is not uber expensive for the hardware or for electricity.

I knew about 3.3v, 5v and 12v in power supplies, but I didn’t “really know” how it all worked. The power supply that I’m using is an Aresgame 850agk. ARESGAME 850W Power Supply Fully Modular 80+ Gold PSU (AGK850) - Newegg.com I bought it because at the time I saw several reviews that said it was a good power supply for the money. And indeed except for this complaint, it’s worked great for about a year. But it is only 20 A on 5v.

I didn’t want to muddy the waters by mentioning this before, but I also have a 24 drive NAS running unraid. For those familiar with unraid, you know about parity operations, and during parity operations every drive in the system can be active. Never had a power related problem at all with that machine, and wouldn’t you know the power supply in it, I just happened to have purchased one that had 25A on 5v. EVGA SuperNOVA 1000 PS 220-PS-1000-V1 80+ PLATINUM 1000W Fully Modular EVGA ECO Mode Includes FREE Power On Self Tester Power Supply - Newegg.com. Didn’t mean to, but maybe by doing that I save myself a PITA with that machine.

So right now, my plan to remediate the situation is to purchase a newer version of the evga 1000w power supply EVGA SuperNOVA P3 220-P3-1000-X1 1000 W Power Supply - Newegg.com , It has 25A on the 5v rails, and it’s a similar unit to whats been in my NAS running rock solid for over 6 years. This particular spec is difficult to search on, anyone know of one that might be lower wattage\cheaper, but also has 25A on the 5V rail. Ultimately the chassis I’m using should be able to hold 32 to 38 drives if I do some fanciness.

This cable that was mentioned ATX E PCI Express PCIE 6pin naar 5 stks DC 5.5X2.1mm Stekkers van Gridseed Mini 60 cm netsnoer kabel|Computer Cables & Connectors| - AliExpress is a very interesting item. I wonder if anyone knows of a way or a device that can be used like this to power hard drives via a non-sata power supply port without needed something like the adapter board from a shucked drive to act as an intermediary device? Or is there another cheap device that can act as an intermediary besides the board out of a shucked drive?

PSU is usually the most neglected item, as it is not really that visible. However, it is a bitch to troubleshoot (have my share with that). So, if you are about to buy new one, but the best you can buy (Corsairs always worked for me). Again, the efficiency sticker is the key, as it indicates quality / components used / long term stability / voltage tolerances, and usually the efficiency is the secondary issue.

Another option that you could explore is to get some old PSU (if you have one on hand), and use it as a second one to run few drives on it. If that works, either you can leave it like that, or purchase a bigger one to replace those two.

As far as that cable, it is mainly used with that setup - Hard Drive Mining Breakout Board X-Adapter CHIX HDD SSD SATA Power (@Voodoo is the expert here). You can buy an inexpensive server PSU that only has 12V, and use that board to do 12->5V conversion. Those server PSUs are inexpensive (used), but loud. Also, those 12V connectors may not fit all your USB drives (I have actually 2 different sizes with mine).

By the way, you have not mentioned, what are you using for your SATA controller. The issue is with the initial HD startup, and eventually switching states (not sure about this one, though). During the startup HD draws over 20W, and if you don’t have an HBA (or something like that), your drives are not being staggered, thus your PSU must deliver N x 22-25W. When the HBA staggers startups, it is closer to N x 8W + 1-2 x 20 W (basically, half the total power).