I made the serious error of only copying across

This has resulted in the wallet needing to resync from scratch, and also the main node height being stuck at 274558/278218 for 24 hours and not moving: 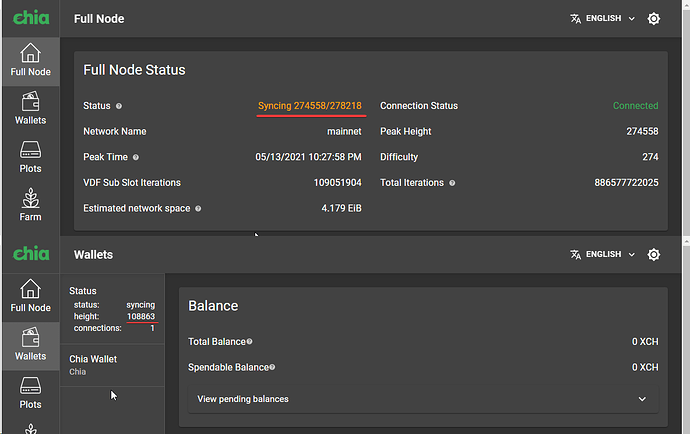 Will the main node height not update until the wallet finishes synchronizing?

I had a similar issue, I just had to re-install and copy over the files again. I think it took about 3 attempts before it finally decided to start working.

I tried to copy the wallet sql file over but the Windows client would get stuck at loading wallet.

I just copied the entire mainnet folder and it seemed to work okay after several attempts.

Although removing it is a pain, as it puts itself in 3 different places on Windows.

I honestly just want to know whether the main node height (that’s currently stuck) will not update until the wallet first finishes synchronizing?

i had this issue too when migrated chia to my rpi4,
it took me much more than 24h to sync, since i did a fresh install

Thanks for sharing this problem and the possible solution, so it can help others in the future!

I did the same, based on another post that described only copying the blockchain DB. When I found the wallet wasn’t sync’d I found it’s DB and copied that too (I was running old and new in parallel until the new was validated as working).

I didn’t have any trouble though, stopped the new wallet, copied over from the old node and it sync’d right back up.