I run 2 plots in parallel on each ssd (3600 mb ram, 2 threads) to check how will it go.
So far, much slower sandisk finished plots faster. During plotting samsung ssd had much faster write speed (was continuously checking via Blackmagic).

I am lost and looking for advice. How to understand why much faster ssd is so freaking slow in plotting…

Hopefully, someone will reply with a more technical explanation but focusing on the sustain write speeds listed on the spec sheet is key. Plus, Tom’s Hardware has diagrams and articles/graphics, deeper explanations, etc. I’ve found great success with the following SSDs:

I’ve tried the ones below but decided to move forward with those two above:

The SSD enclosure and connecting cords matter too. I went with OWC Envoy express and the UGREEN SSD Enclosures for my now ~100 TB farm.

I unearthed my first pool block on August 25th in the AM with less than ~50TB farm, so don’t get discouraged.

The Seagate Firecuda 520 does 2800MBps sustained with Blackmagic speed test, but BM speed test is sustained read/write speed on 1GB + files. Chia plotter is reading and writing much smaller files so BM speed test is by no means an accurate speed indicator for plotting.

I first started plotting with 2 Samsung 960 EVO 2TB SSDs in a TB1 enclosure with RAID 0 on the M1, it BM benched at around 700MBps, and it plotted much slower than the Firecuda NVMe in a TB4 enclosure. Something like 6hrs per plot vs just over 3hrs.

So it appears Thunderbolt enclosures are a bit finicky with NVMe

I’m just waiting on another Firecuda to arrive. Curious to see if running 2 of them in a RAID 0 can plot more than 18 per day on the M1.

@jazsimps Keep an eye on swap use in the activity monitor. If you’re allocating 5200 ram, you might be slowing plotting down a bit. Even with 3390 ram, my swap is usually around 2-3GB while parallel plotting batches with 80min delay + a web browser running. Swap use appears to have increased a bit between 1.2.3 and 1.2.6

I’ve noticed that similar swap range and will keep an eye on it while using the higher RAM configs.

My experience has been ~1GB or less. But towards the end of a batch (29 plots), it drifts closer to 2GB. Usually, I complete a CPU & SSD reboot/erase on the plotting rig when I can remember before running the next batch.

So, I ordered the Acasis enclosure to benchmark it, and this Acasis, the 5th enclosure for me, should arrive later today. I will initially set the RAM at 4000/3500 instead of the 5200 to minimize the swap concerns, Thanks!

Occasionally, the cord that accompanies the enclosure can be problematic accidentally disconnecting mid-batch due to a less-than-snug connection (perhaps wear & tear overtime) or when I happen to bump or move the rig during the plotting process. There’s also other random tinkering with it, so that’s the reason I tested out the OWC enclosure, but once I observed the dip in plotting speed… I continued trying out other enclosures.

I’ve also either used or currently using one of the 5 following SSD enclosures listed in order of purchase:

The cable that came with my Acasis enclosure fits snugly. Can’t say the same about the OWC TB3 hub

The Acasis will run a few degrees cooler if you stand it on its side vertically, I stuck mine to an NVMe heatsink wit a thermal pad, it’s running at 52ºC; sitting flat on a desk it got up to 62ºC.

Is the M1 Mini your farmer? I’ve got 24 drives connected to mine. Since I connected a bunch of drives, every couple of days my wireless keyboard goes crazy, and I have to reboot. Trackpad and wired keyboard work fine though. It appears the Mini either runs out of power or has a device limit if too many 3.5" external drives are connected with passive USB hubs, so I got a 16 port Acasis USB-3 hub (same as the Sabrent one) and an OWC Thunderbolt hub.

The Acasis enclosure’s solid build and performance have been excellent thus far @MontyBurns , a week or so out the gate. Although it’s pricey, I’m buying 2-3 more.

I have an i7 model as the farming machine and a small farm of triple M1s as plotting machines. My bottleneck is not so much speed of plotting for me, but how willing am I to purchase more HDDs vs. simply accumulating Chia coins directly via KuCoin at less than $200. lol

By chance, I was able to snag an Acasis enclosure below the current retail price. I currently use the Sedna 13 Port USB 3.1 Gen I Hub (5 Gbit/s) - 19 Inch 1U Rack Mount. I upgraded the included cord to [USB-C] (10 Gbit/s). I also managed to purchase one before the prices increased to their current price gouging ranges.

My primary M1 rig has the following WD drives growing at ~14-30TBs or so:

The smaller drives (less than 10TB) are still packed with solo plots. I’m ~90% pooling vs. remaining plots will remain solo ones. I adjusted my rigs per your guidance to 80min delay; it works well with the new SSD enclosures w/o any disconnecting issues like I had w/ other models. Till the updated GUI releases allowing for faster plotting w/o using the CLI; unless you know of a good crash course I can take?

Shipping may be slower, but it’s cheaper to buy the Acasis enclosures direct 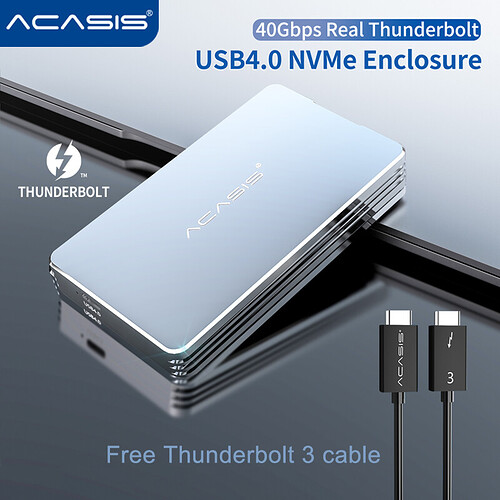 Wow, that’s a pricey hub. A lot of farmers are using the Acasis/Sabrent hub. It draws around 16w with 16 3.5" drives attached. 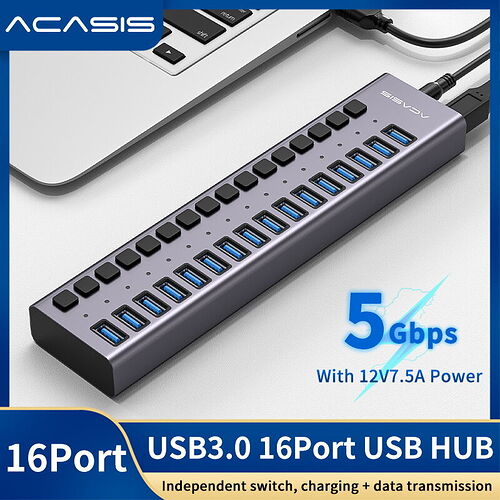 I try to avoid the CLI