Hello guys,
Since about 10 Days i have some issues with my response times beeing slow.

- Im farming on a Full Node Mini PC which shouldnt be the problem.
- Network Connection is stable
- Port 8444 is open and i have 80 Connections to the Network
- I have 17 HDD’s connected, each in a 4 bay HDD Case, each Case connected via USB 3.0 to a USB 3.2 HUB which is connected to the Mini PC
- I have checked the HDD Temperatures which are all round 40° but one HDD has around 47° which in my opinion may could be the problem for the bad response times??

I further have some questions in general:

Maybe someone had the same issue and can help me to fix it, im afraid that i dont have a chance to win a block, because im farming +200TiB for 2 months and didnt win anything…

Greetings and thanks to everyone!!!

Your HDDs in USB arrays setup is similar to mine with one exception: USB 3.0 SS.

You can significantly reduce your response times by using USB 3.0 SS throughout. I use all 3.0 SS ports and 3.0 SS powered hubs. 3.0 SS is five times faster than normal 3.0. My avg response time is under .15 seconds with longest response always under 2 seconds.

I don’t think your problem is your slightly high temp HDD or any HDD. If an HDD was the culprit I suspect you would have larger problems than response times. I think your occasional long response is more likely due to checking multiple plots on the same drive while using regular USB.

Most newer arrays are 3.0 SS. Make sure yours are SS before you bother to upgrade anything else. If one component is not SS then the rest being upgraded is not helpful.

I think my USB Hub supports USB 3.0 SS but my Mini-PC don’t support the SS I guess…

USB 3.0 SS was literally just a way of differentiating USB3 from USB2. It was 5gpbs.

But 5gb/s should be more than fine for farming, right?

Make sure your HDDs are not spinning down. If they have to wake up, it takes a few seconds more, and that’s where the 5 seconds delay you’re seeing comes from (probably).

How can i make sure they are not spinning down?
And how can i prevent it?

You turn sleep mode off in your BIOS for both USB and your HDDs. Have USBs and HDDs on full time.

This fix is at least as important as the USB SS, especially for the longest response times.

USB 3.0 SS was literally just a way of differentiating USB3 from USB2. It was 5gpbs.

Yeah … there was never a good standard naming system for the USB 3 variants. USB 3.0 is twice as fast as USB 2.0, and USB 3.0 SS is five times faster than USB 3.0 and ten times faster than USB 2.0. 5 GB/s is what you are looking for in the specifications to be sure. If you just have one component that is not 5 GB/s then I would suggest upgrading it after turning off sleep modes in your BIOS, lolz!

I just created a cron job to echo nonsense to the usb hdd mount every few minutes. Seems to be working for me. You on Windows or Linux base?

Sleep mode is generally the BIOS default for USB and HDD and cannot be accessed from the OS. They both are usually set to sleep at 30 minutes or less.

Re-boot into your BIOS to check and change. 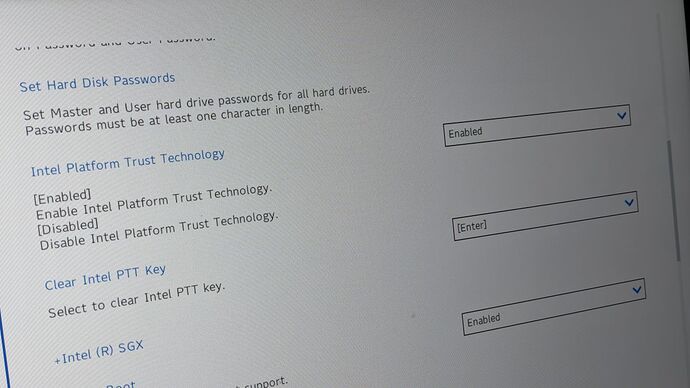 How to enter the BIOS on a Windows 10 PC

Here's how to enter the BIOS in Windows 10

Every word here is wrong.

As for making external HDDs not to go sleep there are two Power Plan settings that control this, one is for Hard Drive sleep settings (defaults to 20 minutes) and one is USB power savings which is set to moderate by default if i recall. There are no BIOS settings to change.

You should do some research before commenting.

I already did that set that energy power saving options.
As already said above, I don’t think my Hard Drives go to sleep, I just think there still might be a HDD in my Setup that is not 100% healthy that causes the bad look up times sometimes…
Usually I have around .6s lookup time but then it goes up to 3s for one challenge, next one is around .6s again…

I just reread your post, i was mostly trying to correct the weirdly bad USB advice.

That’s a lot of devices connected over USB3. Are you using Linux? Do you see any xHCI errors? Also, what CPU and how much RAM do you have?

I have a Mini PC with a Intel Celeron J4125 and 8GB of RAM.
System is stable at this point.
I just hope my Mini PC can handle this much data over USB3.0, but I think it should because most of my lookup times are under 1s, even under .5s.
Just sometimes there is one block challenge with over 4s.
I wonder, if my response time is let’s say 4 seconds, is this the response time of my whole system or just that one particular HDD/Plot?
That’s what I wonder most about…
But as described above, I think it might be a HDD Which is not 100% healthy, because it just happens sometimes and not all the time

Run a disk selftest in linux : smartctl -t long /dev/sdX
(You might need to install smartmontools from source first.) You can also look for remapped sectors in the output of smartctl -a /dev/sdX

its not about data, there are device connection limits over xhci (13 i think?) and you might have devices downgrading to eHCI. Also, that Atom based Celeron might be doing something and get stuck when a lookup needs to happen, its not very fast if a bunch of stuff is going on at once.

Im working and farming on a windows machine…

I just bought that mini pc with that processor for energy effiency, it should be way enough for farming i guess… some guys farming on a raspberry pi…