Specs for PC farming around 1PB of plots

What should be a minimum specs for PC farming around 1PB of plots?

Any Server Mainboard with enough connections to connect 1 PB of HDDs. Done.

Don’t get why server MB needed? Any efficient DIY PC 4-6 core with a couple open PCI-E slots for expansion, NVME or SATA OS drive, and 16GB or so memory with sufficient SATA or USB connection for plot drives works fine and is actually really overkill. I farm .6PB on a I5-11400, 500GB SATA SSD, and it rarely sees even 25% CPU usage, mostly teens.

Don’t get why server MB needed? Any efficient DIY PC 4-6 core with a couple open PCI-E slots for expansion, NVME or SATA OS drive, and 16GB or so memory with sufficient SATA or USB connection for plot drives works fine and is actually really overkill. I farm .6PB on a I5-11400, 500GB SATA SSD, and it rarely sees even 25% CPU usage, mostly teens.

I had a similar discussion a year ago with all the people who wanted to tell me Pis are enough to farm and run a node. As we know by now, most of these people are currently dropping out of Chia.

I know what they are, but not necessary IMO, of course they will work well thou. But I agree, Pi farming is a challenge I’m not interested in.

Specs in a descending order of importance:

1 PB is about 60 drives. Assuming that the best price per TB is for USB drives, an alternative route would be:

The resources needed by chia are needed for full_node process, not so much for farmer. This system scales seamlessly, as a new RPi3 can be easily added, when the next batch of 15 drives is to be added to the setup.

Another, potentially a simpler route for those that would not mind running Flex Farmer would be:

In this setup, there is no need for the full_node. Actually, this setup is the most secure, as there are no mnemonics stored on such system (a cold wallet would complement this setup). A big drawback (IMO) are logs not compatible with anything out there (more or less a no starter for me).

What size are each of those 60 drives? So we know what to collect on sale…

Don’t get why server MB needed?

The main advantage is more than one or two PCIe expansion slots that are connected directly to the CPU instead of through the chipset. At some point the link between the CPU and the chipset can become the bottleneck, although I’m not sure how much that’s a concern for farming/harvesting. There’s a latency difference as well, but it’s probably negligible for search times.

How many cores/threats would be sufficient. Some say 4, some say 8.

You expect Chia to grow and people to use it for more transactions in the future? Get a better CPU.

I have an i7 in most of my machines along with a couple of HEX core boxes from WWII, hey they work so far…

Surely if you’re going to 1PB you should be using SAS and expanders.

I am running it on i5-8250U (4 phys cores mobile CPU in a NUC - about 10W), and it had zero problems with the latest dust storm that had 10x transactions as normal. It also didn’t flinch in Nov/Dec dust storms that had transactions in a range of 100x. Same with plenty of people that are running on RPis (4 cores) that have much slower drive (SSD / NVMe access).

Lastly, the current code that causes strain during those dust storms is rather bad, so you may expect Chia to get their act together way before the strain on the CPU side will be a problem. Part of the problem is db handling, and Chia has recently (last week) admitted that they have basically no expertise on the db side, so, either they will learn it, or will hire someone when time will come.

So, don’t get consumed by what will happen when the sky will be falling, as that is just FUD. If, and only if that happens, you will have enough XCH to trade it for a better box.

Surely if you’re going to 1PB you should be using SAS and expanders.

Lol Scandinavian Airlines might come to mind to the average Joe mentioning this, except if your an IT person.

Most assuredly USB can do merely one PB. That’s only about 56 18tb separate ext drives (not a recommended setup) or much more compactly, and very neat and super simple to use, seven 8-racks of drives. 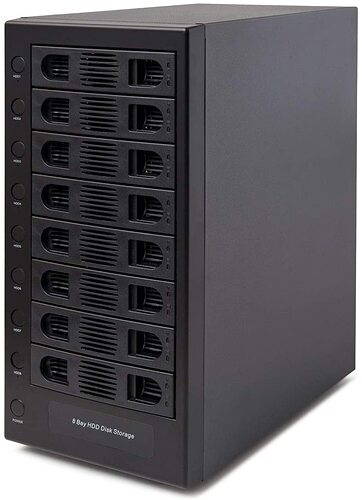 I don’t think average Joe’s will be looking to setup 1PB farms, and we all know what mess comes from multiple USB drives, with multiple power plugs, and multiple extension leads

Admittedly the USB enclosure looks nice, and would tidy things up, but a bit pricey.