I bought a system for chia last week. It takes 5:30 hours to do a single plot with this ssd. When I open it parallel, the time increases exaggeratedly. As you can see in the screenshot I took, there is a blockage. This blockage opens 3 plots in about 22-24 hours. 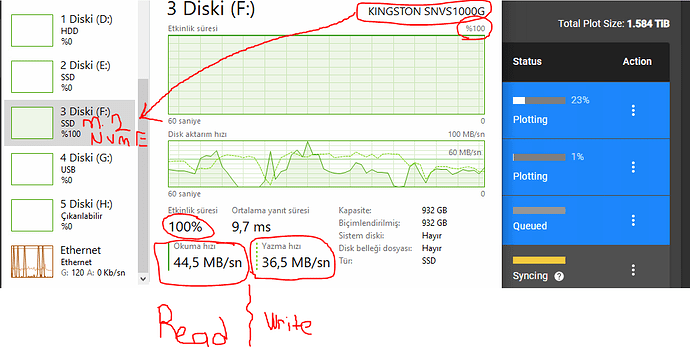 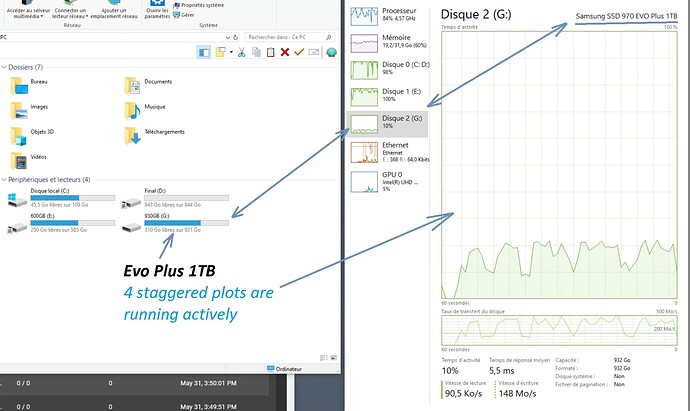 I have 1 Pny 1TB, very bad as well. When I place 4 delayed parallel plots, not only it shoots to 100% and slows down, but it makes my machine shut down.

Here is another medium bad SSD 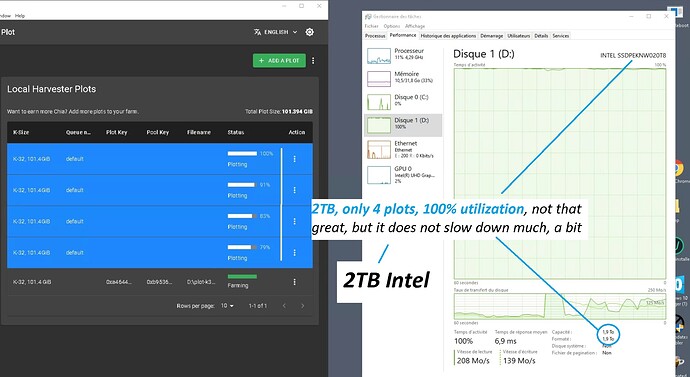 i wanna ask last question ;
consequently cheap ssd slow / costly fast ?
but why ? when i check the ssd speed (kingston) i see 2.1GB read / 2GB write speed what is difference ?

To avoid cheap flashdevices from puking all over themselves when they get full is to not create a filesystem that uses all space. If you have a 1 TB drive, size the partition to say 850 or 900GB so that the drive has some slackspace to do wear-leveling and garbage-collection.

Don’t hope that this trick will save a cheap flashdevice though. They will collapse under prolonged pressure, no matter what. That is why they where so cheap. You pay peanuts, you get monkeys.

Enterprise flashdrives have no issue with this because they are physically much larger than the capacity that is presented. A 1TB enterprise drive can be 2 TB or 4 or more physically, so that the drive’s controller has much more spare cells to work with. This explains why they last longer. They use the same flash-cells but there is al lot more of them so the load is spread over more cells = less load per cell. Divide and conquer is the name of the game here.
Plus their firmware is written to be punished all day long instead of being more bursty. They are often slower than consumer drives but they can keep running marathons all the time instead of being out of breath after a few miles…
Especially the “write intensive” variants of Enterprise grade drives are much much larger than what is written on the box. They are also the most expensive variant for obvious reasons.

What many people don’t understand is that most consumer flash-storage is designed for bursty reads and writes. Enterprise drives may have lower throughput (in benchmarks) but they can MAINTAIN being beaten the crap out of all day long, day in day out. So called “Pro-sumer drives” like the Samsung 980 Pro" are designed to be somewhere in between.
Because they are physically larger, they are more expensive.

People who are focussed on benchmarks: think again. For Chia plotting you want a drive that might be a bit slower but offer stable predictable performance instead of collapsing performance-wise due to constant pressure.

And don’t play the “yes but they are so expensive card”. There is no free lunch. You can’t have both.

I think SteveTheLonelyFarmer answered most of the questions, mainly:

Enterprise flashdrives have much more spare cells to work with

That’s it, these cheap ones have not enough cells, so they get to 100% utilization quickly. Saving on cells, cheaply produced as possible.

What you see on the read/write test is just the burst performance, not maintained perfromance.

i understand now… thank u so much for answers.

Good choice. I use those too (4 in parallel) and I use a partition size of 900GB so they have space to breathe.
They run 24/7 and lose around 1% of their “life” every 2 days which is acceptable. Most importantly, they offer stable predictable performance.
Those 900GB can hold 4 staggered Plots when starting 3 hours apart (stagger-time = 180 Minutes).
As you can guess, I have the temp-space capacity for 16 plots in parallel without running into temp-space or performance problems. Good drives these 980 Pro’s.

Has an even higher endurance (1800 TBW) as the 980 Pro 1 TB (1200 TBW) but I don’t know how well it’s steady-state performance is under constant load (burst speeds are not interesting to us).
Maybe someone else uses this drive and can tell us a bit more about it.

Yea i hope so ! Btw thank you so much for answers and helps !

2-3 days ago I received the Samsung 980 Pro and I started the tests. I noticed that now I have 100% system efficiency.