Transactions go live in a little over 24 hours...what's your current investment strategy with Chia?

I figured it would be fun to capture answers from people before price discovery really takes off starting Monday, so we can compare plans before and after.

My current goal is to get to 50TB plotted and farmed solo, and 50TB at a minimum contributed to the pool we’ll start here for the forum.

I am planning on buying 4 figures of the coin in the next few weeks as well because I sincerely believe in the tech and the team behind the tech, and frankly, I’ve only farmed a couple coins so far so I’d like to pump up my holdings.

Beyond that, I’m unsure how much else I’m going to invest from a hardware perspective. I’m curious what math you all are working with in terms of your own investment strategy, and also, hypothetically if you had let’s say $10,000 USD to spare, how you would invest it right (plotting and farming vs buying the coin directly).

I’ve put in $0. I got some free disks for my home lab a few months ago and during quarantine Christmas I had cleaned up a stack of the old 20x2TB disks that I had been using. They all have about 80k PoH (10 years) on them. I was planning to give them away, but saw Chia mentioned somewhere and thought it would be fun to try.

I was hoping to get to 30 XCH originally, but the netspace has grown so fast that now I’d be happy to hit 10 XCH. I’m at 6 and trying to be realistic.

I also set up a small 36 plot (2 disk) farm for my young nephew who has always wanted crypto currency. I told him he’d probably never win, but his farm hit a block after about 2 days (lol - he’s happy). I told him he’s not allowed to sell it because of the tax implications, so hopefully it’s worth something in a decade.

I don’t plan on putting any money in. I’ll farm what I’ve got and if it ends up being worth anything I’ll take it as free money. $10k+ and I’d be mashing sell so hard my paper hands might start on fire. Haha.

This monster farms on, a memorial to those few days when such a rig could win whole XCH! 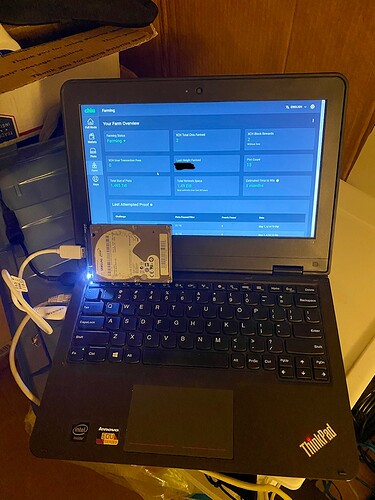 Long $STX and planning to hodl at least through EOY.

I have bullets chambered to buy XCH on the open market too, but unless it starts stupid cheap then I’ll probably sit back and observe the price action for at least several days. "The time to buy is when there’s blood in the streets!"

In a similar boat, have about 311 plots now but, haven’t gotten any chia at all so I’m partially hesitant to keep investing in it solo farm wise but, will likely make an equal investment to pool farm once its available.

Purchase side, would definitely invest $1000 once its first available because I also believe in the project and am excited to see this grow! Any confirmation where we can purchase yet?

If I combine the price and coins-per-TB-per day chart (Chia cryptocurrency blockchain explorer)… and it says a new drive will pay for itself in 6 months… I will buy and fill another drive (if I’m already full).

Since difficulty goes up so fast, this likely means break-even in 2 years. I expect drives to last 3 years. So, inevitable moon lambo for me?

I only invested in an external 8TB Seagate ($180USD) drive to add with a couple of 1TB drives that I already have.
And that’s it.
Will continue to farm solo until pools are released. I wouldn’t invest $10k on this unless I had $100k laying around the bank which I don’t.
But If I had, I would go full Cloud plotting/farming on the short term.

BUT, thats all still unopened and free to return for money-back within the next 14-30 days

If I would have started earlier it might have been different, but so close to the start of trading I might as well wait and see what happens when it goes live.

If next week turn out to be a bust I might just return everything and leave it at that. If it looks ok, I will put the system together and start plotting. I should be able to plot around 32 plots a day and have 1200TB storage. Already have my office pc running the first few plots on an external ssd, so I can get started fast.

We’ll see what tomorrow brings, but I hope/think I will be building a system wednesday if everything arrives on time.

If I get lucky early on and get a few block I will invest in more storage space. This is the biggest cost per plot and the one I’m afraid will get more expensive soon if Chia really kick off

My thoughts right now are to go long-term on Chia. I’ve invested over $13k and am actively working on my setup constantly, have finally won a block earlier today. I have tons of space left to plot and more on the way, hoping that in a year or 2, it’s a mega-money maker. I missed bitcoin, though I dipped my toe in very early I didn’t stick with it, don’t want to miss this one as it’s pretty exciting.

Look at my username. I will HODL.
I invested about £15k in hardware and disks, but before even knowing that Chia exists.
When I heard about it, I just re-purposed my whole homelab and was lucky enough to plot most of my storage before network size exploded.

Now I am helping people in the UK to plot their disks for a bargain price.
Chiaforum thread:

UK Plotting As A Service Buy/Sell/Trade

Hello, (UK) Plotting As A Service from ChiaHODLer Maybe you know me from Keybase - I am an active member of the community before the main net was launched. I can send you drives full of plots, or send you plots to download from cloud. My homelab is ready for your plots, so if you are interested, PM me. I have 2 slots: each on 5900x and 3900x with 128 GB RAM and 6 x NVME SSD on each - which means that if I will receive your two 18 TB drives on Monday, I will ship your drives with fresh plots…

Because (not counting the nvme drives) my hardware will be used to different things when no plotting, I can keep my prices low.

Back to XCH, no matter the price, I will HODL. I wanted to sell some at 10k USD, but I asked myself - “what sum could change my life for better?”
Not 10k USD for sure.

Also, I am a strong believer that Chia will be the first 100k USD coin - even before BTC.

Also, I am a strong believer that Chia will be the first 100k USD coin - even before BTC.

Can you share what is leading you to that conclusion? I’m also excited about the opportunity a new Level 1 blockchain can bring, especially with the smart contracts and programmability like ethereum, but first $100k is quite the claim

GREAT THREAD!!! Thanks @dchuk for hosting!

I’ve been a believer since day 1 (the announcement from Bram that he was starting Chia), I had already started setting aside $2,500 for the first wave of hardware investment, once I saw the traction two weeks in, I doubled down to $5,000. I’ve since started a business that’s earned close to $15,000 from Chia consulting, PaaS, and “speed daemon” plotter building. I recently doubled my investment again to expand and by tomorrow will be all in for $10,000. (before subtracting my profit from my businesses). My initial investment was on a 5 year horizon predicting a $5,000/xch. I’ve acquired about 32xch since block 1 with 675 plots (67.5 TB). Strategy going forward depends on Monday!! If the price is ~$200 I’ll probably try to buy as many xch as people will sell me, if >$1,000 my business is expanding!

What I heard was part of a conversation contingent on price.

By the end of the year, if we have this rate continue, plus once we have price, a whole bunch of IT places are just gonna start going ‘Hey, we should actually do this with our extra space here’. We might be looking at like 50-100 EB by the end of the year or something like that, for netspace.

I hope we see XCH hold above $30, as that would at least cover drive purchases.

Less than 350 usd per coin will be a bargain (storage_jm told that there will be no economical sense to sell it for less at the current moment).

Not surprisingly, the more somebody is invested in the higher their price expectancy will be.

Based on Chia calculator and the rate of increase in network space I’m not even sure the 32TB I’ll have plotted by the end of the week will be enough to win a single block. And it looks like by the time pools actually launch even at 1k per coin the value of that 32TB of storage to a pool would be virtually nill. Starting to have a bit of buyers remorse on a few storage purchases. Not like it’s money I can’t afford to lose and at least storage space has other uses. I’ll be starting to look into other storage coins soon, may need to spin up instances for a few different ones to see what will pay well considering there is no whattomine.com equivalent for storage coins.

I’m just starting out plotting today, heard ppl talking about chia in discord channels last week and finally decided to plot my first just a few hours ago… on a HDD since I don’t have any spare SSD space left.

Actually tried to buy some chia with okex yesterday but finally decided to learn about how to plot first.

I’m planning to spend at least 2500$ to the rig, it will be a welcomed experienced for me since I just lost my job last year and is drifting around without purpose… I can still life decently if I lose that money and not starve.

If chia goes to 200ish I might buy at least 1000$ too, converting from the small amount of other cryptos that I have.

Will definitely join a pool since I can’t see myself spending 10k++ in one blow, at least not right now, when I’m still employed it is definitely possible, but that isn’t the case anymore.

However, answering your question with my current limited knowledge, if I have 10k to burn I’ll def spend 8k for hardware and join a pool with it, and spend 2k to scoop XCH at a lower price point (<200$)

I’m still learning on what kind of hardware to purchase, a more detailed and plotting purposed hardware or just upgrade my current windows PC, currently looking around the forum for threads discussing those.

Sorry to say but this is a major gamble and you need to know that the most likely outcome is that you will lose all money you put into this. I seriously recommend you reconsider, save that money, or put it in a safer investment.

Hi, Thanks for this, I don’t think it has been said enough that any kind of mining is pure speculation, even with all the promising potential chia have right now.

I’ve talked about it with my wife we concluded that it might be better for me to do something, and the amount of money is currently tolerable on the budget I’m thinking of doing, we understand the risks and we also talked about the fallback plan.

I appreciate the concern and I am already feeling the power of the community here.