Via Windows 10:
I have two PC that are connected, wirelessly, to my internet modem/router, via 10 dot class of IP addresses. No problems there.

I also have an Ethernet cable connected directly between the two PCs.

I have not been able to figure out how to configure Windows for the two PCs to see each other via the Ethernet cable.

Running “ipconfig” at the command prompt shows “Media disconnected” for the Ethernet adapter (which is built into the motherboard).

How do I set up the wired Ethernet section of the PCs?
I went through Control Panel’s Networking section. No matter what I tried, I have been unsuccessful.

My goal is that once this is set up, I would like to map a network drive, via the wired connection, between the two PCs.

Note that there is no hub or switch involved, and no crossover cable.
This should, however, still work (I have done this before, but I cannot remember what I did).
Old computers need a crossover cable. But this motherboard is new, and should not need one.

I also have an Ethernet cable connected directly between the two PCs.

Note that there is no hub or switch involved, and no crossover cable.

So no switch, and no crossover cable… you need one or the other. You are on the right track. You can’t just plug an Ethernet cable from one NIC to the other. A crossover cable will work, then configure in OS, or use a unmanaged switch.

So no switch, and no crossover cable… you need one or the other. You are on the right track. You can’t just plug an Ethernet cable from one NIC to the other. A crossover cable will work, then configure in OS, or use a unmanaged switch.

I am 100% positive that neither a crossover cable nor a hub or switch are needed.

I have two other computers (both laptops). I keep them off of the internet. One is connected to my DAC, via a short USB cable that feeds music files to my stereo. The other laptop sits on my lap, and I use Remote Desktop to connect to the other laptop. The two laptops are connected directly via an Ethernet cable.

Caboose made me do my research as I was obviously not up to date.

I’ll help you down the road he sent you on: 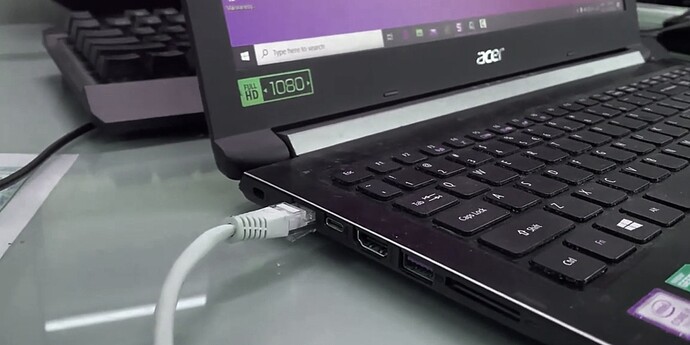 Caboose made me do my research as I was obviously not up to date.

Thanks for the link.

I got it to work.

Now I am able to quickly copy plots between my PCs.
And the file transfers do not use any of my wireless bandwidth, which the Chia daemons use for their internet access.

One network (wireless) for Chia, and one network (wired) for manual plot management (or any other files I might want to copy). And computer #2 is not on the internet, keeping it safer than computer #1, which has the wireless internet connection.

That’s a very common configuration as the 10gbit switches are expensive. A 2 port 10gbit card is affordable and you can chain together multiple servers. Very cheap on the secondhand market.

Quite a few have had problems with their plots not being properly farmed because some Chia farming processes need to be completed in under 5 seconds and challenges are being missed. 2 seconds is better.

If you want to find out if you have issues you can examine the logs or install chiadog.

A simple but not complete way of checking is to watch your challenges (plots passed filter) to make sure you get a challenge approximately every ten seconds and that you are passing approximately 1 for every 512 plots that you have. If you have 50 plots you should you would expect to average about 1 pass for every 10 challenges.

It’s no fun building plots that are not actually being farmed, lol!

So I went with Gigabyte motherboards, because it was what I was able to find. I never owned that brand. Big mistake, as they have bugs with USB connectivity.

I returned them, and the only boards I could find were from MSI.

Further, due to the limited motherboard choices, the MSI boards did not have enough PCIe 3.0 or higher slots, which is needed for a 10 gigabit card (or is it 2.0 or higher?). It did not have another 2.0 slot, either. So the built-in 2.5 gigabit port, with a cat 6e (I believe) or better will max out that port at roughly 250 MB per second, which is not too bad.