Both Best Buy and B&H Photo Video have 18 TB Western Digital USB drives for $299.99.
Both allow a maximum of 5 per shopping cart. But you can probably just place additional orders.

I could not find the answer.
Western Digital intentionally hides it. That has to be the case, when their own web site does not have that basic information.

But while on their site, I discovered that you can purchase the drives directly from them: 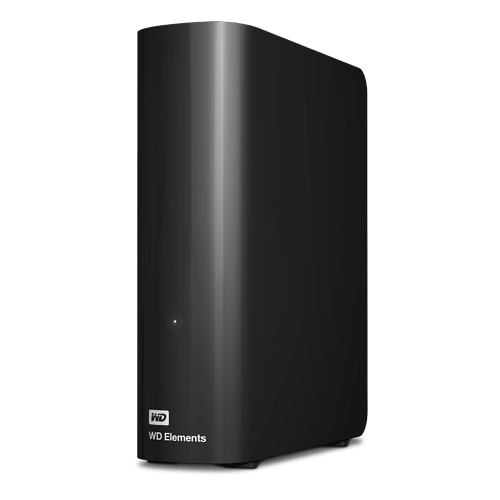 The WD Elements Desktop external hard drive gives you a reliable and ultra-fast solution for high-capacity storage. Friendly customer service can help you set up.

Best Buy and B&H do not charge shipping (well, not for items over $X amount). I do not know whether or not Western Digital charges for shipping.

Western Digital is a customer unfriendly company. I hate to buy their products, for the fear of having to deal with them in the event of a warranty claim. But I never see Seagate drives on sale for the same price as Western Digital’s sale prices.

Those at Best Buy are Easystore 18TB. I purchased a couple of those back in December. Crystal Info shows them as 7200 RPM.

you can purchase the drives directly from them

Those are Elements, so slightly different drives. Although, I would assume that to get to 18 TB, the number of platters are maxed out, as such the RPMs are 7200 to get needed density per platter.

As far as i know there are no 18TB with 5400 rpm on the market.
but there some rumours that HDDs which dont meet the enterprice quality requirements are used for the external usb drives.

The problem is not with “fast enough” as all are. You just cannot get 18 TB drive with cell density of 5400 platter (with the current production technology). To make such drive, it would have to be a bit thicker (more platters, more powerful spindle, more power draw).

What does the patter speed have to do with the density of the platter?
Why wouldn’t the same 7200 RPM drive function properly if its platter’s rotation was slowed down form 7200 to 5400?

Why would the read and write heads not work if the platters spun at 5400 RPM?

I would think that the access times would suffer a bit, and the top transfer speed with suffer a bit. But otherwise it would function as expected?

Sorry to say I got one. 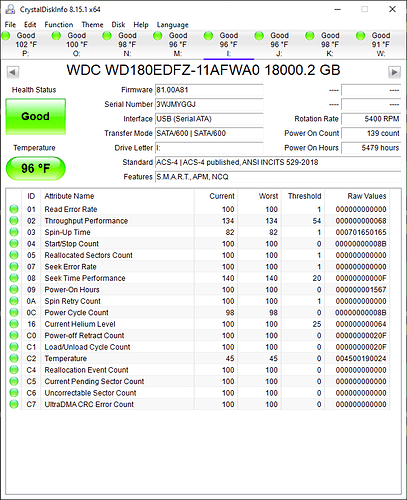 Which model is that?
I plugged the WD180… into duckduckgo.com, and none of the results revealed the model.

Your CrystalDiskInfo image shows that you are using many drive letters.

You can cut them down to zero drive letters, via mounting the drives as NTFS mount points (similar to how Linux mounts drives).

Let me know if you want more info.

I know about mounting the drives and even posted some info way back. Been lazy with this node still have some letters left

What does the patter speed have to do with the density of the platter?

The strength of the magnetic signal on the head depends how fast / strong the change is, therefore, the faster rotation, the smaller / weaker cells can be, thus more cells per square inch.

Sorry to say I got one.

Looks like this could be the new technology that was recently (last year?) announced that will bring 20+TB drives, … Also, that may mean that this drive is SMR (maybe irrelevant in a non-RAID configurations). So, may be a better buy for Chia from power draw point (comparing to Easystore that are 7200 drives).

thx for the info i never heared about this drives and zero info or datasheets at WD website.
the only one is the linked review here and it says it comes with only 2 years warranty.
for the internal 7200 rpm drives u got a 5 year warranty.

Perhaps it exists? I could not find it.
And if manually hunting on their web site + a web search both turn up no RPM answers, then even if they have that info somewhere, then they have intentionally it buried.

This is an example of Western Digital being customer unfriendly.

It used to be simple to look up RPM information. Now it takes too much effort. That has to be on purpose. No one at WD “accidentally” removed that information, as well as no one else at WD noticed that it was removed, and no customers contacted WD seeking that information and explained that it is not there, and still WD leaves it missing / hidden.

They can’t not know that the RPM info is missing.
Whatever possesses WD to not proudly share that info?

Didn’t they also sell some 5400rpm drives as 7200 because they performed as per a 7200 rpm drive? Perhaps this is why they no longer state drive speed, either way its bad.

I do remember in the 1980’s when WD was king of the hard disks. When you bought a 10mb HD you thought you were king storage man…

If I correctly recall…
Seagate came out with the first 7200 RPM hard drive. It was the Barracuda. It was 2.1 GB in size. It was SCSI based.

Well, when I learned about Seagate’s 2.1 GB hard drive, I had to have one. They were selling for $2,100. I found a company selling them for $1,800, and I purchased one. I believe the ad was in “Computer Shopper”, a large, heavy, computer magazine (made phone books look small) that had great articles and reviews, and was loaded with ads. I also purchased an Adaptec SCSI ISA card.

I do remember in the 1980’s when WD was king of the hard disks. When you bought a 10mb HD you thought you were king storage man…

Those drives were before I owned a computer. Few people owned one.
A friend of mine had a computer. I remember him showing me the two variants of floppy disks, and the smaller ones held more data.

Then one day he showed me his 10 MB hard drive that was named “Sider”. I was amazed at how that enclosure held so much data. And even though a 10 MB drive seems like a child’s toy, today, I still find it amazing to have 10 MB in a little box. So, today, having 2,000,000 times that amount, for a fraction of the price, in a similar size box, blows my mind.