Why is it so complicated to use a second PC to plot/farm Chia?

Problem is I have the standard Intel CPU cooler/fan on most of these computers. Temps were not looking too good, although I didn’t deep dive into monitoring it to see how temporary the hammering of the CPU would be. I did see the CPU usage in comparison to the Chia plotter and it was significantly less, along with lower temperatures. Going with the older gear as I have, there are definitely going to be some shortcomings. It is almost impossible to sort out the Mad Max information to find anyone using a similar setup. Result are obviously impressive, but this is when using a certain “grade” of hardware. Or at least that’s my understanding.

On a side note, it’s funny to see a thread on the forums talking about running Chia GUI on multiple computers. I would suspect most people, given the choice and both being pretty much equal, would choose the Chia GUI over CLI. Most, meaning mainstream or non computer programmers or non network managers or non IT professionals.

Hi. I can understand the frustration. I run a full node and 5 harvesters.

I find this diagram useful to get an overall sense of how the different services work within Chia. 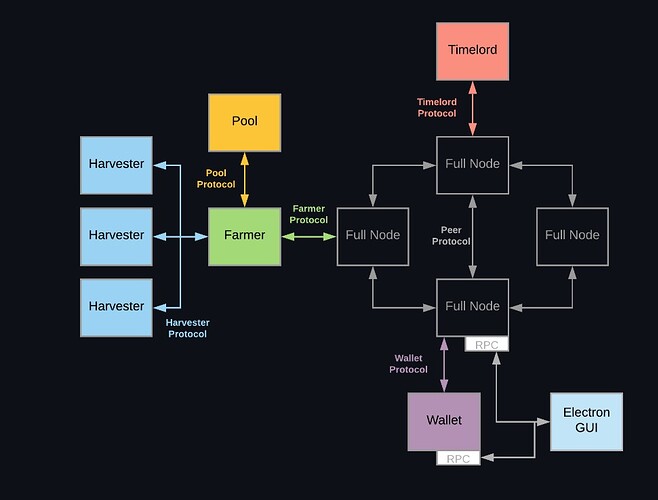 You do want to run the harvester on the 2nd computer from the CLI. I wrote a blog post last year on getting a harvester setup and running. XCH Dev Blog - How to Setup a Chia Harvester

Plotting is a separate process from harvesting, and as I saw mentioned previously, as long as you have the Pool Public Key, Farmer Public Key, Pool Contract Address you should be able to plot as either OG solo or have a Plotnft and do self-pooling or as a member of a pool.

You’ll likely want to do the plotting from the CLI too, because opening GUI will start up services that you don’t want running (aka Farmer, Wallet).

I would take the time I learn how to get MadMax working from the CLI as you will like see improvements in speed and if the command is put into a script, it’s easy to kick off. I’ll provide an example of the bash script I used for MadMax below for Plotnft plots. You’d just keep to adjust the setting for your hardware. I know you’re on Windows, this is just an example to see the command options. You’ll have to change some stuff for Windows. I’d write that out too, but I have only plotted on Linux and not sure the Windows route.

This script starts with a screen command so that the script will run in the background and give you the option to switch to that background screen if you wanted to view the output. You can ignore this part for windows.

Then the script changes to the chia-blockchain directory and activates a python virtual environment.

Then the main MadMax function of “chia_plot” is ran. Here are what each of the option switches are for and you should adjust as needed.
-t temporary storage used during plotting. Many use a NVMe or SSD for this space.
-2 secondary temporary storage used during plotting. Not required. A different NVMe or SSD for this will speed it up but not necessary.
-d permanent storage of where the plot will go once complete.
-n number of plots to create.
-c Pool contract address (you’ll use this for Plotnft plots)
-f Farmer Public Key
-r threads to use during plotting. I had 15 because I have 8-core, 16-thread CPU. Adjust for your system but probably leave a couple threads for the regular OS.

The pipe | followed by tee command just write all the output to a log file. Also only on Linux and you can ignore.

Chia has included Madmax with the current version nowadays, but I’ve still used it this way outside of their copy. I will concede that reading the help on chia plotters -h is a mess. I don’t understand what it is saying. I could follow the directions on the Madmax github to install from the CLI. Madmax Github

You’ll likely want to do the plotting from the CLI too, because opening GUI will start up services that you don’t want running (aka Farmer, Wallet).

Can config.yaml be configured, such that the GUI will not start the farmer and wallet processes?
If not, is there any harm in letting those processes start, and then stopping them?

I do nearly everything from the command line. But others, including this thread’s author (@MisterSavage), conveyed their desire to stick with the GUI.

Did he express that he wanted to use the GUI only? If so, I missed that. He had several very long posts, so it’s possible i missed it.

I don’t know if it’s possible to make a change in the config.yaml to keep services from starting. But I suppose in theory, you could start the GUI, and use Task Manager to find the processes “start_farmer” and “start_wallet” and End Task on those.

It really is as easy as putting chia start harvester in the CLI though… I do agree it would make sense to have another ‘mode’ to the GUI for harversters.

Another thought… I think I’d open the GUI in Wallet mode and then check the running services. If the harvester is running, then running in Wallet mode might be the answer (once you’ve finished GUI plotting, or you plan to plot from the CLI). Not sure if you can plot in Wallet mode… I’ve never tried.

Once you know how, it really isn’t that hard to use the CLI (command line interface). I’ve explained above an easy way to open the CMD window in the correct place.

@steppsr, yes the course that I set out on was to discover the new world. An undiscovered coastline and way of life. I set sail to go where no other Chia participant desired to go. I’ve set off on a journey to use the GUI on a second computer to plot with.

My method is crude. Indeed it involves starting the GUI with internet connection and subsequently yanking the ethernet cable. I find taking out a cable a lot less fuss than reading about harvesters, etc. It’s sort of like having to go to a plug in the wall to turn a lamp on or off. For whatever reason, the lamp wasn’t designed with a switch at the actual lamp to turn it off or turn it on. Yes it works. Indeed you can turn it on and off at the wall. It sure is a dumb design choice though. I say the same about the Chia GUI. They spend how much time on it? They bothered to include MM and BB. Yet it’s essentially limited to one computer. It seems so wasteful to me.

I guess what I’m doing could be called a workaround. If it was my software/platform I would be ashamed that this was the only way to accomplish this.

As for CLI, I completely get it. I understand it. I could do it. However, when I start something I don’t like to lose. In this case I wasn’t going to let the Chia GUI beat me. I’m more about helping Chia be mainstream. CLI is the opposite of mainstream. The information on the CLI posted by members in this thread is excellent. It is concise, easy to follow and I will be going that route soon enough. Ultimately because I don’t have a choice because of how Chia built in certain inflexibility.

So this isn’t really a debate about whether CLI is better. It’s just that people seemingly don’t have a choice in the matter when it comes to using the Chi GUI on a second computer. Obviously I’m talking about being able to use a portion of the Chia GUI, just the plotting aspect of it, on a second computer.

If the only feedback is, why on earth would you want to use the Chia GUI when there is CLI? I would bang my head against the wall. The correct way to say this is:

WHY WOULD I USE CLI WHEN I CAN USE THE CHIA GUI.

If there are a multitude of reasons why CLI is the “go to” solution for a second or more computers to plot with? I’d say Chia should be taking notes, listening to the feedback and FIXING the shortcoming so that this would be true:

THE CHIA GUI CAN DO EVERYTHING CLI CAN DO, BUT PRETTIER AND EASIER FOR EVERYONE.

I bet that if the GUI was more flexible, then many more people would use it.

Indeed it involves starting the GUI with internet connection and subsequently yanking the ethernet cable.

On your 2nd computer, do you use it for anything other than plotting?
If not, then no need to have an internet connection.

If you want your 2nd computer to share its completed plots with your 1st (main node) computer, then you will need a network connection between the two boxes.

But if you are copying plots from computer #2 to computer #1 manually via USB drives, then computer #2 does not need any network connectivity.

And if computer #2 is only plotting, then after you start the GUI, you should kill the farmer, harvester, and the wallet, via taskmgr. Leaving them running when you are neither farming nor harvesting is wasteful (and you might run into trouble if you decide to put computer #2 on the internet). I do not think that those processes consume much resources. But there is no point in leaving them running.

I’ve done all my plotting on my main PC rig (Windows 10) & haven’t changed a single setting for over a year.

Good point, I have to crank up the fan speed for tomorrow or those external drives might melt their plastic enclosures