we have developed a win probability calculator over at https://chia.garden. What’s wrong with https://chiacalculator.com/ you ask? Well, nothing, we love it! Ours just gives you a different perspective: it displays the probability distribution of winning some blocks over a time period, which is arguably more important for smaller farmers than theoretical fractions of XCH you would routinely see at the chiacalculator. 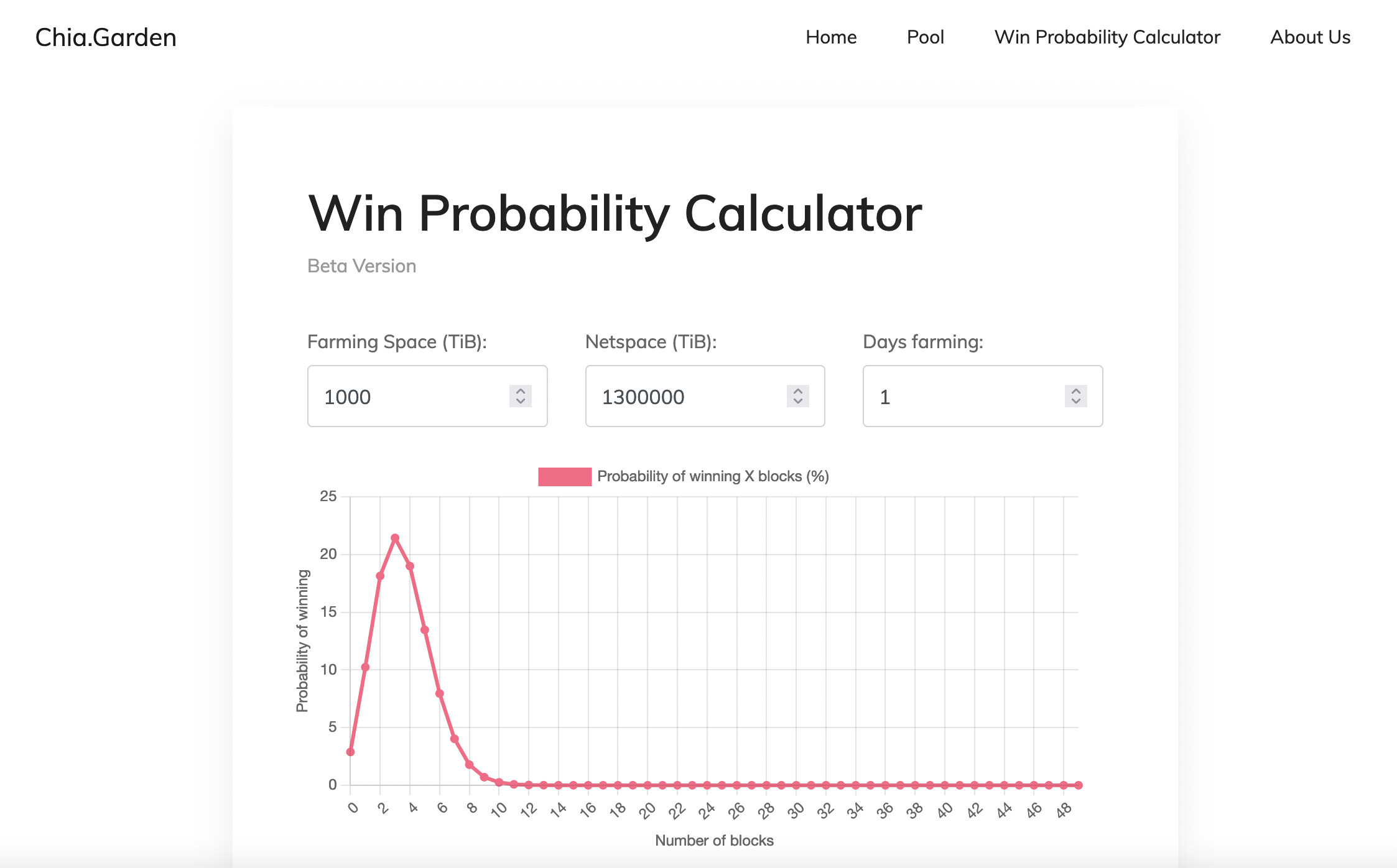 Looking forward to your feedback in this thread or at feedback@chia.garden.

Chia.Garden is a group of crypto-enthusiasts who build a healthy ecosystem around Chia: open, secure, and decentralized. If you’d like to help our cause and work with us on projects like this, shoot us an email on join@chia.garden. Currently, we are looking for developers, designers, and content writers, but everyone’s support is appreciated.

P.S.: You can also sign up for our farming pool. Three more days to secure a 0% fee offer (for the first year of farming).

Could you explain how it’s used?

I assume I have to enter my current size of plots and my estimated netspace in N days, correct? So, if I have 100TiB and expect a netspace of 3EiB in 14 days, it would look like this. 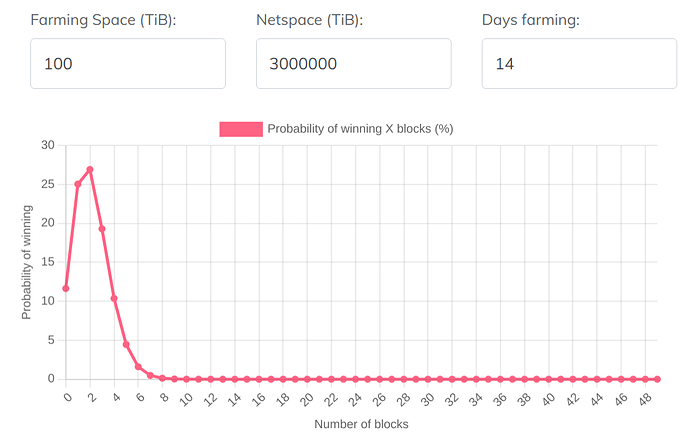 I think it would be a good idea to switch netspace to EiB.

If you’re taking suggestions on this calculator I have several that would incorporate some of the benefits of chia calculator, but make the tool more useful overall.

I’ve got a few more tweak ideas, but what I’ve laid out is quite a bit as it is so I’ll leave the rest for now. If I could inspect the code for it I might be able to find a way to tweak it myself for what I’m requesting, but considering all my coding experience is with obscure DCS and PLC software it might take me a minute to spin up on whatever you are using so it’s probably better to let the pro’s handle it.

Thats cool, you may want to check k their trademark policy and discuss with them if you haven’t already. They said having things with the word chia first might be an issue but they were open to discussions, but I’m not Chia Networks.

I think it would be a good idea to switch netspace to EiB.

Your understanding is correct. The graph shows you that you’re ~12% likely to be unlucky and win nothing within those two weeks, you have a 25% chance of winning a single block, 27% chance of winning two blocks and so on. Each block rewards 2XCH.

We’re discussing this on chiaforum and the most popular third party services are called chiaexplorer and chiacalculator… Dev’s are aware of our existence (we’re in contact to bring the pool online as soon as it’s released) so it should be fine. We will need to rename if the core team insists, but so far it does not seem like they intend to enforce that rule against legitimate services.

Thanks for the heads up.

We have just released a small update to the calculator: the values you have entered in a calculator fields are now “remembered” in a URL, which makes it easy to share your graphs with other people!

Just copy the URL once you’ve finished setting the values and share it. As simple as that! Here’s an example.

They just responded to this on stream, chiaexplore is the only licensed trademark user. and pools will not be allowed to use chia as the first word in the pool, like chiapool or the chia pool to prevent appearing to favor one pool.

I’ve seen the translation. If we receive a request from Chia we will host the pool under a different name. So far it hasn’t been an issue.