Hi guys,
I am using an Asus Hyper M2 card on Raid0 in Ubuntu.
According to Linus from https://m.youtube.com/watch?v=lzzavO5a4OQ for optimal performance you need to install AMD RAID drivers in exact order.
I saw on keybase that a lot of us are using those cards for plotting - did anyone used a ASUS RAID drivers and received the better performance, than just using mdadm on linux? 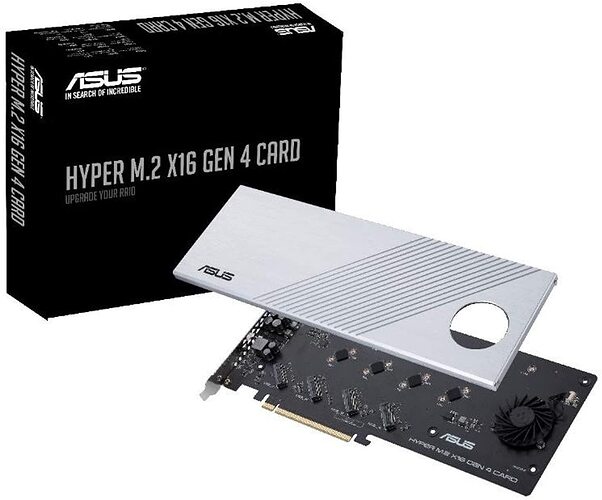 It’s important to put the card in the correct PCI slot and set up bifurcation in the BIOS for the PCI card:

Wow, Jeff Atwood, creator of stack overflow, nice to see you there!
About the topic:
I am plotting on ryzen 9 5900x, and I used RAID0 with those 4 nvme drives.
I am making 24 plots simoultaneously (on 12 core/24 thread cpu) and I found that NOT USING a RAID0 is significantly faster than using it.
Are you RAID0 your drives @coddinghorror too?

No – I am using it as a way to have 6 full bandwidth PCI nvme m.2 drives on the same board, primarily. Two on the mobo (as per usual), and then 4 on the expansion card.

I’ve seen some crazy fast plot times from people with raid-ed nvme drives though, let us know how you go!

I aldreay bought 2x NVME 2TB. but I think i cannot make a 3rd on it because of my cpu?

You connected 3 NVMEs to one AsuscM2 Hyper card?
You can detect only 2?
If yes, its because 2 first pciex slots are using x8 each (x16 is for two slots).
You need to take out your GPU that is occupying your x8 slot and connect it to 3rd pciex slot that uses x4 from chipset.

if something crashes, you can recover

Perhaps it doesn’t matter, it’s a temp directory after all!

But yeah, hardware RAID is a horror, software RAID are great and superior both on Linux and on Windows too!

unless you have a very fancy RAID hardware card

Not even, they’re a pain until basically a NetApp filer level when the kind of pain changes. I got into Chia just a day before you Jeff as it finally pushed me to buy enough drives to also sort out my failed RAID, which it did 2 years ago.

I’ve found IO not being a problem in Chia plotting at all.

With my surprisingly old Broadwell processor (It was still adequately new a week ago! Single core being constant better part of the decade as it was) it is 10-12 parallel jobs until single SATA line is saturated so I can just hook up older 2TB drives there and stop at that (some come with warranty not limited by TBW!). With Threadripper being 3 to 4 times faster at Chia (as it is!) I can imagine this starting being a problem, but NVMe have grown faster still from 6× (3GBps with my 2017 Samsung) to 14× by now (newest 7GBps PCIe 4.0 models, they max out at 5GBps on PCIe 3.0 from what I’ve read).