Apparently some people are doing some less boring stuff, how do they do that? 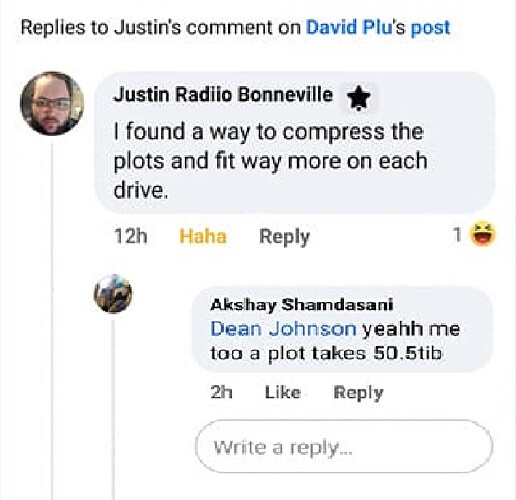 I don’t think that is possible. And the total lack of any detail makes me think they are full of it. The entire purpose of a plot file is to prove you are using the space the plot file needs (ya know, Proof Of Space). If it was able to be compressed further and still be usable, that would totally compromise the system.

yeah either a joke or bs

Plots are mostly random data, that by it’s very definition does not compress much.
And even if you could somehow reduce the space(by a significant amount), they would no longer be viable to farm with

Yeah, I looked up “readable compression”, all I got is zipping… lol

Here is another guy, it looks like he is pasting a whole plot file into hex editor, then replacing the random id with memo to pass filter validation, adding serial id, and save copies as plot 01, 02, 03… 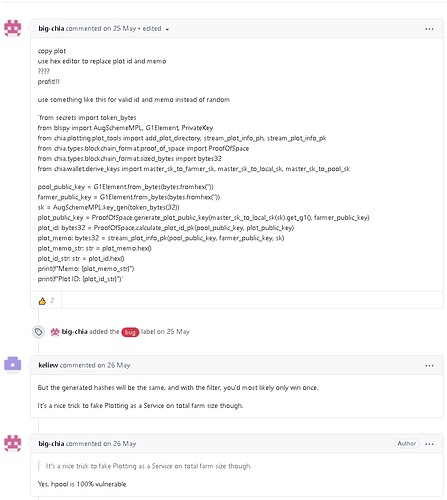 I saw a vid on YouTube, and the guy was editing the header in the plot to swap keys, but you couldn’t change the plot ID or it became invalid.

I think thats exactly the way u get banned for cheating

Yeah, that is not a way to compress the files. That is a method of creating massive amounts of plot files without actually going through the plot process. But they are basically duplicate plots with new id’s. The only thing this would be good for is to try to fool a pool (like Hpool or something). Or to fool a client of a Plotting service (create a bunch of duplicate plots that look different).

I’m curious, and hopefully it’s not possible as it would need fixing.
But if you were to change keys in the header, and farm those same plots on a different ip with a different set of keys, couldn’t you create 2 blocks, get 2 x rewards?
I’m not sure how difficulty works, but I’ve read blocks can be created much closer than the 10 seconds, and both are valid and rewarded, but it pushes difficulty up if to many are found over a set time span.

As I said, hopefully not possible but if it is, better those of us with vested interest to make this work find out so a fix can be made rather than ppl essentially cheating the software.

Generally, compression should be possible, but increase responsetimes too much

By using many duplicated files, compression could be more efficient, but of course, that would be plain stupid.

File content binds to plot id, and plot id binds to keys. Changing any of those makes the plot invalid.

It’s also possible that they are only changing the “memo” part of the plot file, which effectively does nothing. So the plot still binds to the original key.

Note that if a plot is farmed out by 2 people and they have different reward address, only one of them would get the reward. The blockchain is a sequential database, you can’t append the duplicate reward records into one chain, and if they are recorded into different chains that becomes a double “spend” (or double reward) and only one of the parallel worlds would remain alive.