How to upgrade to Chia DB v2

Just did the migration from DB v1 to v2.

Just type “chia db upgrade” in CLI, then the process starts. Looks like its single threaded again… So it’s gonna take a while depending on your CPU clock rate and SSD speed (whatever the bottleneck is).

Don’t forget to check your config.yaml file to make sure the DB section says v2 on the main node and wallet.

How long did this take for people??

One of my nodes has that CPU, but I have 16GB of memory and a Samsung SSD EVO 870 and it took about 4-5 hours if I remember. What type of SSD do you have? It seems that the difference is speed in these SSD does matter depending on what’s going on.

Forgot to ask you upgraded from what version to what version? And after the upgrade you shut down chia correct? And let the upgrade run by itself which would make it faster.

I’m still running the farm in the background as this is my only full node & I didn’t want to be down for too long. Guess that makes the difference. I’m on phase 5/5 finally!

Hopefully nearly there. Back up db v1 beforehand just in case of any issues

Yes running the Farmer in the background takes up some juice.

Did you backup the DB V1 when chia was not running correct?

thanks - Yea only backed up the DB V1 when chia was fully shut down.

Not sure if it’s necessary but I do that every few months just in case my db gets corrupted & I have to sync from scratch!

Anytime you want to backup the DB chia has to be down.

I assume I can now delete all three blockchain_v1 files? 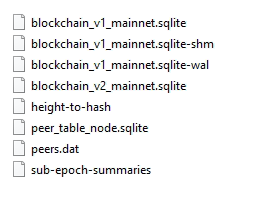 Copy them to a USB drive for awhile just to feel good and don’t forget to check the config.yaml file for main node and wallet to point to v2.

Looks like my config.yaml is still displaying v2 - do I have to update this manually?
Any idea how best to go about it

As it should, youve just converted it from v1 to v2.
So long as its pointing at v2 no need to change it.

Is it trying to sync?
Check your target peer count in config.yaml it has possibly been lowered and needs upping again.

then change it.
Mine changed itself after doing the conversion, and a restart.

So I did a restart and most seem to be pointing to v2 - only ones remaining referencing v1 are;

Do I just edit this to “v2”?
There are no such files in the V2 update (image attached above)

You can leave the simulator statement alone in config.yaml You can edit the wallet to V2 even though the code already points to v2, I guess they will fix that also down the road.

Cheers boss, sunk to many beers to be giving advices today…

Painting going well, little cutting in and gloss left to do.