Interested in a a highly transparent alternative to HPool?

I finally gave in and joined HPool and the experience has been not the best, to say the least. I was expecting ~0.081338 XCH/day for 417 plots/~41TiB but after almost 8 hours, I’ve only been credited with 0.00927479. It seems like it took a long time for all the plots to appear on the list after the farmers did so I’ll give it a few more hours to catch up.

In any case, there’s a lot of unpleasant rumors about HPool and very little transparency. I’m starting to think of hacking together a very simple pool that works on your existing plots like HPool but doesn’t replace the farming software, require you to input weird opaque signatures, etc. It would be completely open source, and would make all of the operations completely transparent. Of course, it would still have to run to an extent based on trust and could be vulnerable to cheating - one possible mitigation might be closing the pool to new users once it reaches a certain size, thereby making it impossible for bad actors to join after it’s already a juicy target. At that point, a new pool could be opened, also limiting the amount of impact an individual cheater can have.

Are you interested in an interim solution like the one I described until real pools become available? How much plot space would you be willing to add to an untested but highly transparent and open source pool like that?

the brandon coin yt channel is doing this with his his mates. they are all friends who know each other. using some script from foxypool i think. you can see it in the video. they are all sharing the same private key.

given that plots would have to be redone to join you on your key, i see little value in what you are doing with official pooling only a short while away.

not to mention the fact that there is no way on gods green earth would i join a pool with random strangers on the internet, no offence.

The official pooling protocol will be incompatible with the current plots. I expect around 3 EiB of plots will need to be deleted and replaced with the new ones.

Based on that, I think the idea of utilising existing plots is great. But in all honesty before expecting people to join it should be more substantiated. The only plan I understand is that it’s going to be trust-based. So it could only work with people you actually know.

If there’s a game plan for non-trust based solution with technical details I’m sure lots of people (including me) will participate in that project.

No, plots would not need to be redone. That would defeat the purpose. You also would not share your key with anyone.

not to mention the fact that there is no way on gods green earth would i join a pool with random strangers on the internet, no offence.

I respect that. However, that’s exactly what people are doing by joining HPool so clearly there are plenty of folks who feel differently.

If there’s a game plan for non-trust based solution with technical details I’m sure lots of people (including me) will participate in that project.

I’m thinking about various ways to build confidence and mitigate the trust problem but I don’t think there can be a fully technical trust-free system until real pools are available. This is meant as a stop-gap for folks who are unhappy with solo mining until then and/or with rebuilding all their plots.

I wouldn’t ask anyone to actually join without full open source code and technical details - right now I’m just gauging interest before I spend my time trying to build the technical parts.

I’d be interested to talk through the options here; I’m currently sitting on 3000 plots.

Interesting to hear a story from someone who has actually joined the infamous HPool… thank you for sharing!

After I posted the first message in this thread, I’ve been accruing credit on HPOOL much faster, but still about 30% less than my share of the network space suggests I should be getting as part of such a large pool.

Update after About 18 hours after joining HPOOL, my yield now seems to have stabilized at about 83-84% of my calculated expected value, for a ‘shadow fee’ of 16-17%. It’s not great, but it could be a lot worse.

I joined HPool because the official app is crap quite frankly. Bittorrent got adoption because of just how good the uTorrent client was. I’m not surprised Bram doesn’t understand that considering his running of Bittorrent Inc. Hpool being written in Go is lightweight, super simple, doesn’t crash, and I no longer care if my copy of the blockchain goes out of sync because of how the official Python concoction handles multiple connections. I run the official app alongside too, with farming rewards address pointing to a second wallet. I get more from Hpool than from my own farming. Reddit people warn of being kicked out of the pool if its ran alongside, I got no problems so far. What I get from them is 20% less than I calculate my share in Hpool is considering their netspace portion and thus their slice of 4608 rewards a day. They do accounting in batches so for the first few days that number hasn’t stabilized. Overall I found the whole affair surprisingly pleasant.

Here’s my initial thoughts on how to build an alternative to HPOOL:

At leaste you are earning something

After pool is delayed,i joined Hpool too. I’m at 6TB now. Until the official pool will be out takes a month for sure. And the netspace is faster then I can plotting. (1.2TB per day)
Don’t have any chia yet. So better get something than nothing. If you have some chia I wouldnt join Hpool.

Hpool setup was easy. Online plots showing takes like 3H. So its not your setup mistake.
0.2 xch min take out.

When official pool is out and you need to replot. You will earn nothing till then.

Don’t have any chia yet. So better get something than nothing. If you have some chia I wouldnt join Hpool.

Hpool setup was easy. Online plots showing takes like 3H. So its not your setup mistake.
0.2 xch min take out.

When official pool is out and you need to replot. You will earn nothing till then.

One thing I cannot deny, besides the Chinese being the owners of most of the chias, they work better than the official team…merit to their client that works without bugs, if the farmers are going to receive something inside the hpool, that’s another story

Update: I withdrew my first 0.2 XCH from HPOOL today. The average yield since I joined the pool was ~94% of my calculated expected yield, much better than most of the rumors about shadow fees. Withdrawing to my own wallet went smoothly within a couple of hours of their reported withdrawal time and the fee was 0.0002002 XCH. The poor documentation and lack of explanations in the UI seem to be the worst part.

Congrats for the payout. How long did it take with how many plots?

3.74 days from first reward to reaching the minimum withdrawal limit of 0.2 XCH using 417 plots (of course, with network space growing exponentially, I’m projecting it will take almost 4.5 days for the next 0.2 XCH, 7.5 days for the following 0.2 XCH, etc.)

Man, it is really obvious in retrospect that launching without official pooling was a massive mistake. I understand the developers didn’t anticipate the network getting this big this fast, but still…

How much of the network does HPool own now? Is there a place we can look that up?

5.88EB right now according to their own reporting. The below is taken from their website.

The recent dip is where they kicked out a bunch of folks with disguised duplicate plots. 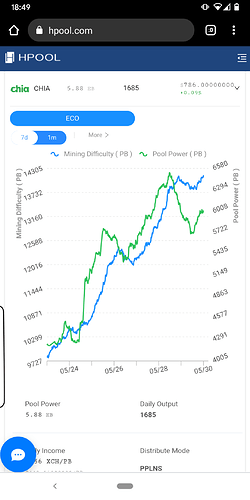 but hpool reports themself that they are at 5.88 EB
which would be 42% of total space, seems like 7% of hpools netspace dont really provide enough power consistently

1 Like
How does Chia intend to fight back against HPool with code?
next page →