Looking for a sqare display with high resolution

Im looking for a square display (1:1 aspect ratio) With a resolution of at least 2500x2500.
anyone having information?I couldnt find much except lg odubleup with 16:18 aspect ratio.

Id be happy with just a panel as well, i want to display my owned nft artworks

I know it’s not what you are asking, but at work, we have taken to rotating monitors 90 degrees to display art (so it doesn’t look like a bunch of TVs on the wall when you first walk into the room). Most of our images are taller rather than wider so this has worked for us.

And I am in your camp - I couldn’t even find a nice 4:3 ratio screen last time I looked. Once DVDs came built into laptops (and now Nexflix and other streaming apps), widescreen won the war unfortunately.

The only square screens I know of are those tiny Raspberry Pi breakout board tinker units:
Adafruit HalloWing M4 Express - ORANGE HALLOWEEN EDITION! : ID 4300 : $39.95 : Adafruit Industries, Unique & fun DIY electronics and kits … very small, limited use, and a pain to get running.

yes. Its kind a sad. I found dedicated sqare art screens.
But the resolutions are sth like 720x720 or max 1920x
My best guess is that they salvage panels from screens of 2010 or so

At an old job, we used to use Viewsonic VG900b monitors: 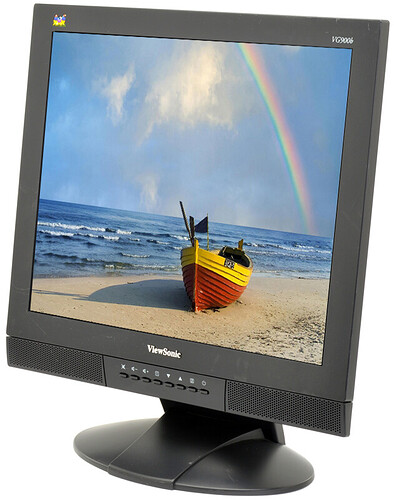 If you tell us what you want it for we can give u some real feedback. I went from 4K to dual 2k and now to single 2k and it was the best decision.

LG Dual up in theory very interesting but there are some practical problems that make it a pain in the ass.

If I were you I would also look into this giant Dell 4K screen (not sure it was 34 or even 42inch but beside the dial up that what I would consider if I want to get better than now. The problem with 4K is the scaling. HDPIbworks great in Macs but on windows it’s so broken that is basically unusable. I consciously use my Mac in 2k (non retina mode) to match my windows experience. A giant 4K screen that can be used without HDPI scaling would be something I would consider - although I can not be sure it would be better than a 2k (sounds weird but only using it will tell you)

The dual up seems like a great idea (stackin borderless 2x 2k displays) if u don’t expect the inputs to change and swap on the fly - that cool. I just don’t know how much usability u get from allways looking at that second computer . Also switching inputs is still a pain and not flawless. All these software solutions like Logitech flow suck. So u will need physical switching of input devices (forget using separate input devices - tried that and it sucked)

In my opinion a 2K display, an input Switcher (Logitech mx does it not elegant but better than nothing) and display Switcher (KVM or hdmi hub) gets you 90% to optimum.

If u only have one computer then priorities are obviously different.

For writing code or text people have long used rotating screens - but I would rather take ansinge dual up . No borders, no color deviation beside even two identical displays (at least in a reasonable pricerange).

Okay, so the primary goal, in its simplest form:

The problem with 4K is the scaling.

not exactly sure what you mean by that. One can use whatever scaling algorythm he favours. To be precise:
The artwork is either larger than the screens resolution (will be down scaled) or I will use nearest neghbour upscaling (no blurryness, pixelness persists, especially useful for pixel-art)

dont know what you mean by second computer. Ill hide it under a sideboard or so and relay a cable channel to the display.

imho a terrible idea. I have tried it. The image looks terrible due to the polarizing filters

If u only have one computer then priorities are obviously different.