Mega Iterations per second I think.

Yeah, I also though Mega (1024 for whatever reason) of something per SECONDS. If that is it, should be lower case. Still, tooltips will be needed before release.

What I was missing when syncing is the current height vs. my height, plus timestamps in the log when those heights really happened. Otherwise, it is hard to say how long it will take, but maybe that is not really that important, as the process is fast, so potentially no one will ask to have a download option.

Max advises to have this <2 sec to minimize the risk of losing a block-reward.

Here is the link from a month ago (MMX FAQ) - Discord

So is this already obsolete - “Lookup times of < 1 sec is considered very good and < 3 sec is acceptable, whereas anything higher than 7 seconds risk losing block rewards.?”

I mean, if that FAQ is right, then both of those boxes are already in a really good shape. I am not really sure what system would be faster - one of those two boxes (more RAM, full speed NVMe) or RPi (much better GPU side, I think).

Wonder how that CPU would do as Timelord?
Don’t know if it’s turned on automatically but from the faq:

Create a file in ~/config/local/ named “timelord” with lower case t. Open the file in text editor and type “false”. Alternatively you can run “echo false > config/local/timelord” and then restart the node. For Windows, put the file in `C:\Users\name.mmx\config\local\timelord

Changing false to true would turn it on I guess.
Timelord stats in the Timelord tab of the Node in GUI.

The legend himself speaks on MMX >

So as stated in this video if you run MMX.Node-0.6.12-win64.zip and make mmx plots they can’t be used for Chia farming. It is its own deal…

Wonder how that CPU would do as Timelord?

That file with ‘false’ inside was already there. Kind of funny, but this is the only one non-JSON config file there (an afterthought?). I changed it to ‘true,’ and it oscillates around 3.4 M/s iterations (whatever those units mean 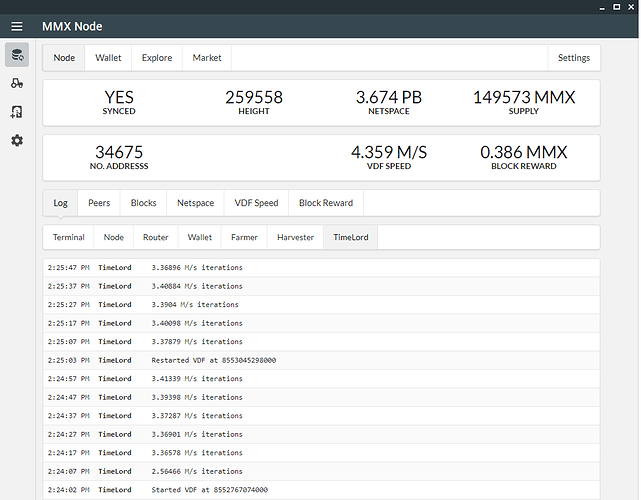 Here is the Task Manager 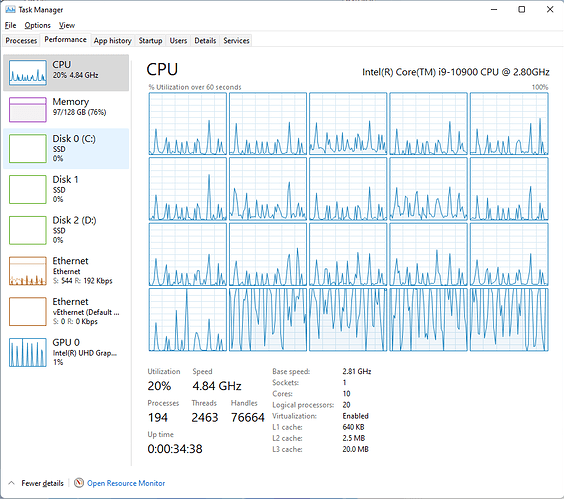 As you can see, it sits on two physical cores (lower-right four charts / logical cores), and maxes them out, but rather no change on iGPU side. If this is a feature that can be turned on, it would be nice to also have the core count in that file, with potentially an ‘auto’ and ‘default’ settings to take over the whole CPU, or go back to ‘normal.’ So, JSON, looks like you are MIA.

Just now MMX.Node-0.6.16-win64.zip Is upgraded today and ready to download, I will install it on my test node when its finished doing some tasks tonight…

By the way, the latest release fixes some db bug, as such testnet/db folder needs to be deleted (both Win and Linux).

Just installed latest on different PC, then tried to redo my wallet with previous keys. Looks like wallet has to be re-created too ( or I don’t know how

I moved my .mmx folder between boxes to get the same wallet (so can test with the same plots). Although, looks like I busted it with this update, as I deleted that db folder, and no info about wallet. Will try to look into it later. Although, db synced overnight (kind of slow this time).

It looks like v…17 may be coming soon and it will address some of the syncing problems.

I’m installinhg v17 as we speak, I renamed the db folder to db-12 since that what it was. The wallet is syncing or just spinning around for now.

I’m installinhg v17 as we speak,

I think it would be better to wait for v…18

Those previous versions have some syncing / db issues.

By the way, after some time (not sure how soon), you will need to restart UI, as it cannot recover and stays dead for a looong time.

I shut it down for now. On another side node, do you see an issue in running MMX and chia on the same network??

do you see an issue in running MMX and chia on the same network??

I shut it down for now

Yeah, good call. I am also shutting down, and will restart once v…18 is out.

Right now I’m installing windows updates on my farmer, I have auto updates turned off. give me a chance to shut down chia then get any updates then reboot.

I have MMX v17 & Chia installed on a couple plotting (not farming) machines. Nothing unusual I can see w/both working w/GUI and Win10. Apparently no port fwd needed either w/ MMX as UPNP is disabled anyway from Chia. Nothing about it in install directions I can find. Only issue found is I had to disable my anti-v as it nagged me and won’t let run the install file.

Also just now have put in a dedicated MMX microPC in the basement to farm wirelessly. My few TBs of plots there are being offered up and have already won a block.

It’s seems Chia sw trials and tribulations were good lessons on PoST sw. It’s easy to know what you’re doing from the get go. And the superior GUI app is refreshing.

Was just asking, my issue was my farmer needed some updates and a reboot after a month or so. And when the MMX app was just spinning to sync, the I saw my farmer had an issue.

I think it would be better to wait for v…18

Those previous versions have some syncing / db issues.

By the way, after some time (not sure how soon), you will need to restart UI, as it cannot recover and stays dead for a looong time.

Call me crazy Jacek, but aren’t these flavor of comments about MMX the same type of issues you are (were?) having with Chia sw? Is it a possibility that these are your issues, not the software’s issues? Just saying and not meaning to attack you or start a argument

, just seems a strange coincidence, no?

Nah, some nasty ‘db replay’ bug was introduced in v…14 or so, and Max didn’t really get it fixed till now (past v…17 - few minutes ago). Other people were reporting the same thing.

Also, there is a UI issue with the current version that when your node will start working on that db replay, the UI will basically get permanently stuck (tat hit me as well). Thanks to a couple of other guys, they noticed that restarting node brings working UI back, so that helped me as well. Max mentioned that the UI issue (while db replay is pending) will be fixed later (seeing what he does, maybe tomorrow

So, we just need to be patient, as the fix is already in the code (I believe), and stotik needs to push the Win update (or maybe he is waiting for Max to finish some other things).

I am running two nodes. The one that was running all the time didn’t have any problems. However, Max stated today that with v…16, we may need to delete db folder (what I did), as there is a big chance to have that part corrupted (not block_chain.dat file but rather something in that db folder, though). With the old code, the db replay from that block_chain.dat file was blazing fast (short minutes), and somehow the bug affected that. So, most likely your run your node the same as my other one - all the time up, so no problems at all. Most likely, if you just installed the latest version, and let it run, it should be also working fine. The offending part is that db folder deletion (I think), as that is where that db replay kicks in.

The difference is that MMX is 3-6 months before going to production, and you can see Max really working hard, and being responsive to all kind of comments, so you can see the progress. On the other hand, Chia is one years past going production, and that crap just barfed on me today during the shutdown (UI was closed, no process ended, had to manually terminate those, both dbs was left open - think corruption).

I really don’t mind if you keep me close to the ground, rather am happy that you do it. That is the only way for me to learn, as sometimes I get stuck on tiny things that I think that I am the only one seeing. So, really as long as there are no personal attacks, all feedback is welcome and I am happy for that

So, I hope that we are good and on the same page!

UPDATE
Here is another post from Max, just a minute ago - " just made another improvement to the new DB, reads are much faster now (branch db-direct-reads, not merged yet)"

So, I think stotiks really wait for a green light from Max.

Apparently no port fwd needed either

That was actually mentioned today on discord. Most likely, that is not needed now as we are just testing, and the network is tiny. However, Max mentioned that port forwarding is / will be beneficial for the network. So, for now no need to worry about it.

Here is a post by Max from end of May - " New port to forward for testnet6: 12336." Although, I am not sure whether that is for sure a port that needs to be forwarded on the router.

Only issue found is I had to disable my anti-v as it nagged me and won’t let run the install file.

I am running Win Defender, so it was just giving me a warning about a not certified file, but let it install. However, that db folder is updated like crazy, and Defender was taking ~20% of CPU time to scan it. So, for time being, I added folder exclusion for .mmx folder, and that took care of it. However, MS Search is another process that takes another 20% of CPU time, and I am not sure, whether there is a way to exclude a folder somehow.

Although, maybe those two things were so active, as I was rebuilding that db folder, and once it will sync, it will be less traffic in that folder.

Also just now have put in a dedicated MMX microPC