Is there anyone doing the same–employing a bunch of HDDs as temp drives and plotting in parallel on them, one plot on each HDD? I have many small SATA HDDs (~3TB) but only one 512GB SSD so I tried taking the HDDs as temp drive.

I really wonder where the bottleneck is–CPU has more threads than allocated by the plots, and CPU usage is only 20-40% most of the time; RAM is abundant; and I ran reading/writing benchmark on all the HDDs (even if 8 together) at the same time, and their speed is just the same as solo.

Is anyone aware of the reason behind this and how to mitigate that? Much appreciate!

To clarify, all these HDDs are CMR not SMR, with similar performace and similar lead time when single plot is running on them as temp drive

There’s only so much bandwidth available on all your sata ports combined. I think this is it. It’s why dedicate controllers or m2 drives are preferable. There’s more bandwidth available. Controllers have their own pcie lanes as do most m2 slots (this all varies greatly board)

This is the issue, SATA saturates very quickly if more than one drive is being used at 100%.

If you have lots of these drives to use it might be worth it to look if a SATA add on card would give you more IO bandwidth for drives. Seems like it would? 10hr is certainly pretty reasonable. I’m surprised that more people aren’t talking about HDD plotting.

We’re talking HUGE differences in bandwidth (width of pipe) between 6gpbs SATA and a PCIe 4.0 m.2 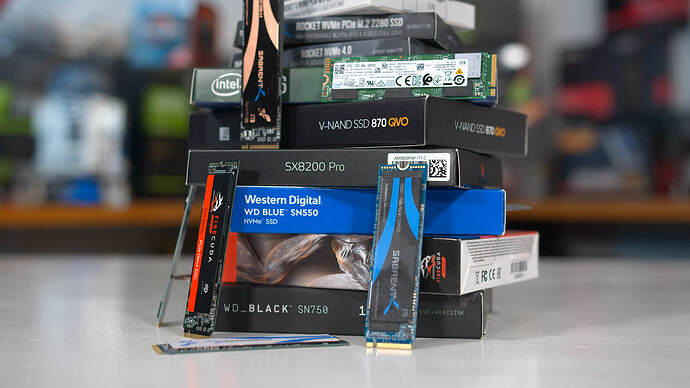 What sort of storage do you need to play today's games and provide the best loading times? Do you need a PCIe drive? Do you need something...

Thanks for the reply bro, however one SATA HDD could only run up to 200MB/s, and all onboard SATA ports combined should be sharing an overall bandwith of 4GB/s. Acutally I ran 4-6 instances of AS SSD Benchmark or HD Tune Pro, testing the read/write rate of the drives at the very same time, and there doesn’t seem to be any noticeble difference than testing alone. Even if I add one SATA SSD which itself could take up to 400-500MB/s in the test pack, still no speed loss.

How comes 4 HDDs would be slowing down so much? This is not explained yet. 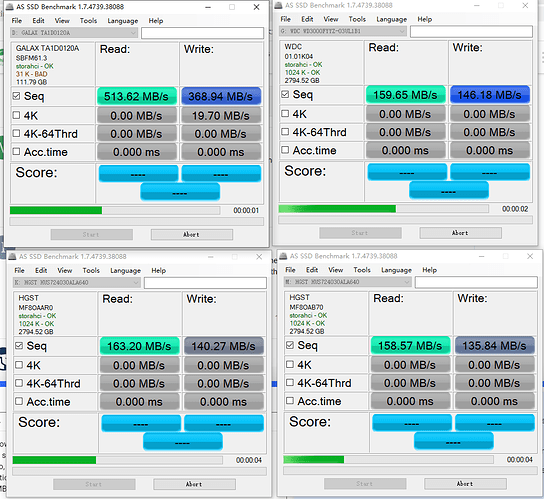 Yes and I’m aware that, however plotting itself isn’t THAT fast as it’s bottlenecked by so many factors.
Even with one single HDD as temp drive, one plot can be finished within 10hrs, and the difference is much smaller than that between the speed of HDD and PCIe M.2

It seems as if when plotting on multiple HDDs in parallel, the CPU constantly stops (as a whole) waiting for one or another HDD to respond and therefore the CPU utilization rate stays really low (usually 40-60% in the log which I believe should represent that percentage of just 1 thread, as in single plotting it often exceeds 100%)

is seq the correct benchmark to go against? Watching writes, it’s definitely not a large chunk all at once. Are seek times on the HDD a factor here? I mean, folks are doing RAID0 m.2 x4 or a bunch of enterprise drives tied together without issue. Just something w/ the SATA interface maybe?

That’s better than I expected. SSD vs NVME is covered here; TL;DR NVME is 13% faster. But that is all single plot testing; none of that matters if you are trying to do parallel plots!

well, I tested 4K randow R/W together as well and the results are still the same–no difference between single run or simultaneous run

I think the problem is almost solved.
Tried PrimoCache which utilizes some RAM as a buffer for the HDDs and the performance increased dramatically, now I can finish 6 parallel plots in 12hrs. So, it seems to be a problem caused by heavy simultaneous random access of multiple HDDs–CPU and/or other parts will have to wait for the slow HDDs constantly and that dragged down the speed. With the RAM buffer this situation is improved greatly.
Now I’ll try to tweak the parameters for even better performance. Thanks guys!

Tried PrimoCache which utilizes some RAM as a buffer for the HDDs and the performance increased dramatically, now I can finish 6 parallel plots in 12hrs.

I wondered about doing something like that because the workload seemed to have bursts followed by idle. I did over 300 plots directly to HDD and 12h is really good. The best I could get was about 14h with most of mine taking 17-18h because of being CPU limited. I have older, slower CPUs than yours though.

If you’re not doing it already, try using the same directory for -t and -d. I think it might save copying the plot at the end (unless the software is smart enough now to do a move if it’s the same filesystem).

What the heck is “primocache”?

It’s software. I glanced at it. I didn’t look close, but I’m guessing it enables disk write caching and / or ReadyBoost.

That’s not a recommendation. I wouldn’t buy it personally since enabling write caching on each disk should accomplish the same thing for free.

since enabling write caching on each disk should accomplish the same thing for free.

Not quite. It is so much more than drive write caching or ReadyBoost and thoroughly different use cases.

PrimoCache is secret sauce for a lot of applications, especially in build systems that use Windows, or when you need lots of storage but also high speed write to that storage, e.g. computer vision analysis, or non-linear video handling. Closest equivalent on Linux is bcache, or the new tiering feature of btrfs.

For my configuration: I have my plotter configured to plot to eight separate, Intel DC P3700 NVMe drives for the -t. All eight of the -t drives have separate, dedicated 16GB RAM-based write-only caches in front of them.

On the farmer, I have a 4TB DC SATA SSD with a dedicated 1TB partition to act as an L2 cache that sits in front of the farm HDDs which lets the HDDs keep up with the 10Gbit connection to the NAS.

The tiered caching is provided by PrimoCache. I’m not saying it makes a huge difference, but it has helped out my configuration.

The company also makes PrimoRAMDisk, which is kind of neat, exactly what you expect, but obviously not much to say about that subject because, well. it’s a RAM disk.

AFAIK -2 to -f is a move operation when they exist on the same physical volume. But -d to -f, even on the same volume, is always a copy operation. But don’t quote me on that, it’s been a while since I tested that and it could have also changed since then.

You might want to try creating a separate read-cache and a separate write-cache in PrimoCache and set your delayed writes to around 20 seconds. You can also utilize a separate, small SSD as a L2 cache. Though be aware, PrimoCache will obliterate everything on the SSD when you do that.