Summer Chia Rig move due to the heat 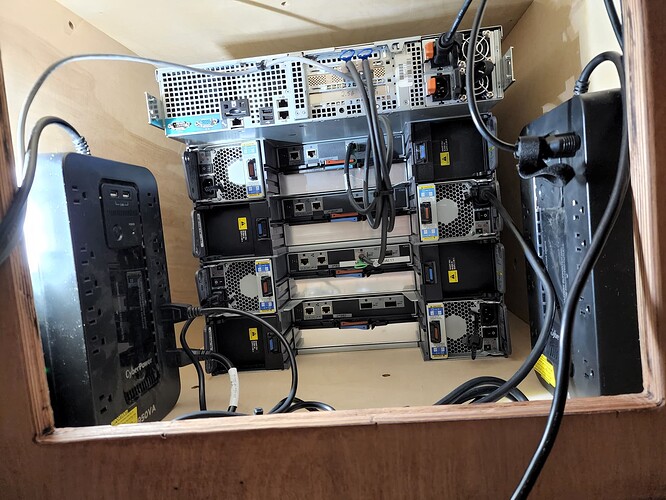 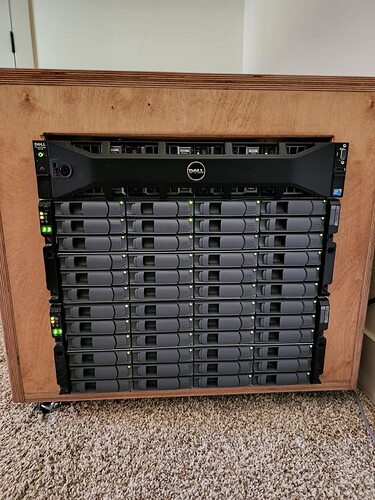 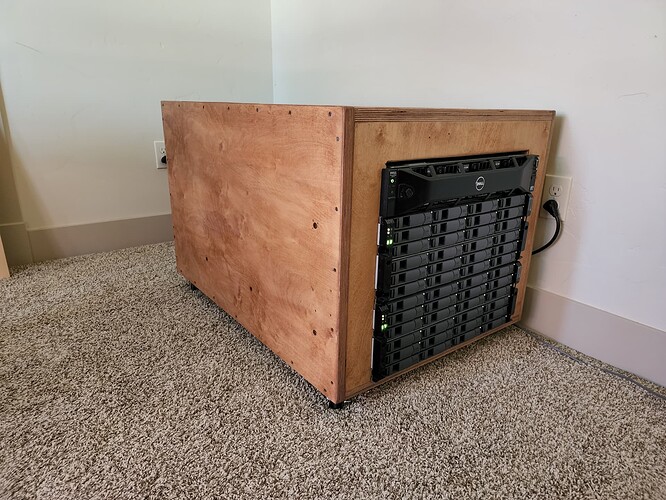 Garage Network 1/2 rack was getting to hot for the summer, so I built a small cabinet to run my setup in a spare bedroom. Just used some old crating material I had laying around, nice 1" thick multiply plywood. Current hardware is a R510 running the full node and 12 drives, plus two Netapp DS4246 Disk Shelves. I’m currently at 497Tb, and still room for about 7 more drives.

Thoughts on if it gets to hot in the room, the closet has an access panel to the crawl space, maybe I could port the exhaust to there if needed.

I think there is a reason why ethereum miners went open air. When an industry moves in a certain direction, like a standard, it’s usually because it’s a good idea from a cost/performance/maintenance perspective. You find some YouTubers with GPUs stuck inside certain cases, but might be more of a matter of getting the equipment for free and or financial incentive (affiliate income)

Regarding this box, if looks matter, then this is a 10/10. Tremendous craftsmanship.

The case is mostly for Wife approval haha, not a jumble of cables hanging out. Only a couple power cords and a network cable, also dampens the sound some.

I can appreciate the reasoning. I’m in the same predicament!

also dampens the sound some

And put some dents in the carpet

how much does it weight?

How hot is too hot?

Ironically, it was the temperature of my apartment that caused me to give up Bitcoin mining around 2013/14

You might want to plug in those secondary power supply’s on the netapp’s so they run quieter and use a little less power (also redundancy and all).

Not sure how much it weighs but yeah heavy. Two Ibuprofen in the morning heavy. The loaded disk shelves weighed more then the cabinet.

Garage was getting up to 90F and some drives were approaching 45C and supposed to really start getting warm next week. In the 100’s.

I found my netapps run the same level of noise whether the 2nd power supply is plugged in or not. Both sets of fans spin either way. As far as power usage I’ve read that only using one power supply and removing one IOM6 drops the power idle power usage down by 42%. I haven’t actually measured the usage and scenarios only what I’ve read on the forums and youtube videos. I can see running both for redundancy but I’m not a data center just a Chia Farmer squeezing out every last penny. lol. Even went with a low power single CPU in the Dell.

Wood is gonna be an insulator, so it’s gonna hold a little extra heat haha.

I would have left empty space for UPS and another one of those shelf’s in the future. Other than that it’s looking good.

Considering the amount of fans it has drawing air in from the front, I really don’t think that will be an issue as there is a nice big hole in the back of the cabinet. 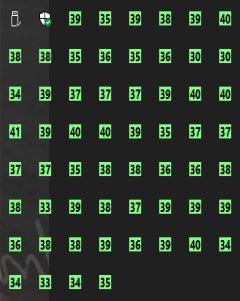 After a good 24 hours temp soak in, I can live with these temps on the drives. Room warmed up to about 78F, and its 90F currently outside. I use Hard Disk Sentinel to monitor the drive temps.

I use Hard Disk Sentinel as well. 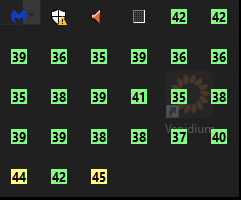 I have a server with 16 HDD installed in three Supermicro 5 bay enclosures, as well a 5 WD Elements, which are sat on my own designed 3D printed fan housing. This is in a very small room with no windows, just a door, it has most my networking equipment in it, along with a lot of coats and shoes. The two yellow ones are the two NVME drives.

Ambient in the hallway outside the room is 23c at 6:30am, the server/cloakroom room is easily a few degree’s warmer.

I found my netapps run the same level of noise whether the 2nd power supply is plugged in or not. Both sets of fans spin either way. As far as power usage I’ve read that only using one power supply and removing one IOM6 drops the power idle power usage down by 42%. I haven’t actually measured the usage and scenarios only what I’ve read on the forums and youtube videos

Correct from my experience with Netapp DS4246 (and DS2246). No difference in noise levels, both fans run on both PSU’s as both supply the same power backplane.

As for power consumption, one PSU plugged in uses less power than both. Pointless having both in use if redundancy is not needed, and pointless supplying both from the same main circuits as usually both will end up going down at the same time anyway in any domestic environment.

Unless you’re going to use UPS systems on one or both, you’d only be protecting against failure of one PSU if both are plugged in. I consider my second PSU’s to be an ‘offline spare’ and save power, which can stack up.

I use Hard Disk Sentinel to monitor the drive temps

Out of interest, what HBA card are you using in Windows ? I presume your shelves are being used as JBOD trays ?