I just used Chia -show c to see the number of connections I have atm and it is very low. Like 20-30 connections. Farming is not affected though, won twice in the last 3 days. Hence I was wondering what’s going on. Is there another duststorm or did they change anything to the protocoll?

Nah, that’s normal, like max connections you could get by default is around 40.

I agree. I almost always have a full 80 connections, but recently I’m at 24-25 nodes or less across several machines I sync up. Interesting…

In general, you can say that peers are needed for two reasons: 1. keep the network stable, 2. let you farm.

To keep the network stable, the more peers you have to some extent it is better (thus some inexperienced dev hard-coded 80). However, machine limitations need to be factored in (and it is not). The default is 80 (too high for too many nodes, mostly during dust storms), and min is either 3 or 5 (if you restrict your peers down to 0, that min will kick in, I think). So, having either 10 or 40 or 80 rather doesn’t make much difference. Also, if you disable UPnP and close port 8444 it defaults to 8, I think.

As far as farming, you basically need just one node (good one - most are). So, to be sane, anything starting with 5 or 10 will do. If your node is not too strong, and you need to sync from scratch, potentially setting it temporarily up to 5 may speed the syncing process. Once up and running, my take is taht anything above 10 will do.

The number of peers is also affected by how many nodes out there have DHCP enabled, and/or port 8444 open. During dust storms, some nodes will choke, and if properly implemented, the p2p protocol should be dumping those nodes. It takes time to replace them, so maybe this is the reason that you see 40 right now. Although, my understanding is that the weeding of those hosed nodes is not really done right / fast enough.

I have similar problem. Few days ago my provider have issues and after that my “static” IP was changed. Since than I have most of the time 8 connections and from time to time 10-11. Nothing else is changed into the environment. Port 8444 is forwarded correctly.

That 8 connections (default for outbound only) suggest that your 8444 port may not be open. You can use this page to check whether it sees your port open.

Just in case, you can increase your outbound count in config.yaml:

Assuming that you have either DHCP enabled or port 8444 forwarded (and your ISP is not blocking that port), getting inbound connections is faster than getting outbound ones. So, even if you increase that target outbound number, most likely you will still get more inbound connections. However, at the end of the day, there is no difference for your node, whether connection was established as in- or out-bound.

This morning, my main node is down to 10 connections, while yesterday it was in the 20s, prior to that had always seen ~80 nodes. Odd… 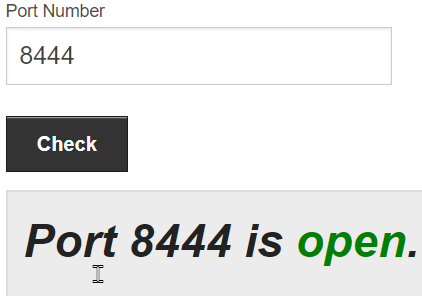 Same with me.
But what I discovered is that - with default setting if port 8444 is closes - than I cannot have more than 8 connection. At the moment situation is a bit different - since yesterday connections are more than 8 - usually 10-12, but not 80 as it was before.
May be one of the reason is that I changed my IP and not enough nodes know about me :-). May reason for this is that there is an active “dust storm”

Do you have a static IP address on your farmer that the router forwards requests of port 8444 to that IP on the farmer?

Yes. I have static external IP and static internal IP on the farmer. Also port forwarding if correctly configured.

Btw number of connections is back to “many”.

Just run this to check

Could your ISPs have implemented CGNAT?

You really think his ISP is going to spend the money?

I’ve no idea, just seemed odd that after an IP address change it’s stopped working. Could be that the new IP is from a range that is CGNAT’ed. My understanding of CGNAT is limited to be honest but I do know that it’s a bad thing if you’re trying to forward internet facing ports to your own router. It cuts down on the number of IP4 addresses an ISP has to use which I presume saves them money rather than costing more? Hence why it sounds like a lot of US providers are starting to do this more and more to save money. Apologies if I’m way off the mark but it’s something to check at the very least to rule it out, does your IP address here: https://www.ipaddress.com/ match what you see assigned to the WAN interface in your router or modem?

e that is CGNAT’ed. My understanding of CGNAT is limited to be honest but I do know that it’s a bad thing if you’re trying to forward interne

Strange into my case is that now connections are 18-20 - so every few days - number of connections are increased without any changes into the infrastructure. My feeling is that by unknown reason - other nodes doesn’t want to “discover” me… Or discovery is very slow.