One of my Western Digital G-Drive's died. Now the marathon with WD begins

The drive that died is a G-Technology, USB drive.

The drive that failed is a RMA drive that they sent me from when I had a previous G-Drive failure.
That adventure, of it taking weeks to get an RMA, and weeks after the RMA for them to ship, with calls nearly every day to prevent them from dragging their feet, was a nightmare.

It is always a long wait on hold with them.
Whenever they re-open, they will have more than the usual number of calls, due to being closed. So this is not going to be a picnic.

Perhaps some executive decided to make the RMA process better? Perhaps I will be pleasantly surprised? But with them being closed, it is already a bad omen.

Did you try running Data Life guard from WD on the drive? 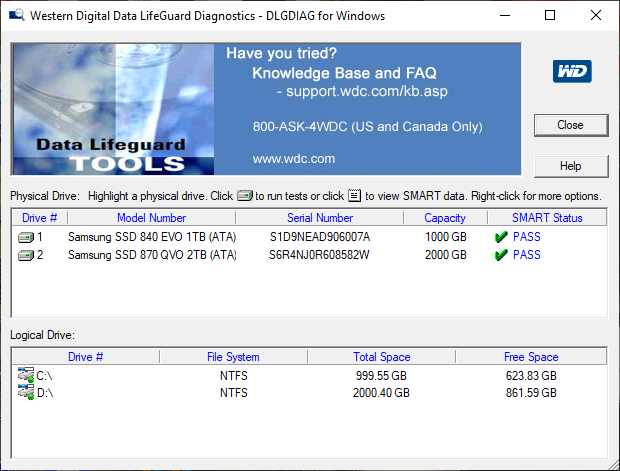 Some time ago (long time), I was looking at one of those WDC data guard programs, and it was just a data pump transferring all kind of things from my box to WDC. Some time after that I also had their HD crashed, and when called for RMA was asked to use that program. I explained to the guy that this is their spyware, and I refuse to run it, but offered SMART data, and without any resistance, he agreed with that. Although, in my case, I could still access SMART data (the bad clusters were just starting to accumulate, so it was still spinning and responding).

So, you may also try to run netstat when you have it up and running, to see whether it calls home, and if it does, use it only on an isolated / irrelevant box. (Maybe just pull the network cable, and see whether it will start without any issues.)

Did you try running Data Life guard from WD on the drive?

These G-Technology USB drives have a power light.
On the drive that failed, the light does not go on.

I do not think that any diagnostic tools will work, because it is as though the drive is unplugged.

If Western Digital asks me to install any of their software, I will not do so.

Than your in luck! Totally salvageable.
Sounds like a lil electircal issue and not disk failure. Which almost never happens all of a sudden. Signs become obvious e of that slowly

So Possibly disk controller has malfunctioned. Does it make a smell when u open the drives case. On the pcb??

That piece of pcb can be removed and replaced.

If U care about the drive enough. Say If it’s a high tb drive. Totally worth it.

Does it make a smell when u open the drives case.

That will void the warranty.

No matter how carefully and expertly I open the drive, if I leave any sign that it was opened, I can kiss the warranty goodbye. I will not take that risk. Especially since I would not be able to fix anything even if I found a problem.

U don’t have to open the drive

U don’t have to open the drive

I will not open the case, either. That will void the warranty.

Well is the warrintee sticker? Not typicaly on the outer shell plastic.
That’s only on power supply’s.

If there’s no sticker there is no way for them to find out to void the warrintee .

But I’m a badass, live life on the edge type

I Just be pullin warintee stickers just cause I don’t like the way they look on my power supply’s.

they usually try to jyp u out of it reguardless.

No offense to the jypseys.

But I just trust in my skills.

I give it a 3 on hardness scale.

If there’s no sticker there is no way for them to find out to void the warrintee .

You expect me to believe that they have not designed a way to know whether or not to honor warranty claims? …that they would not know when people open the drive’s case?

I should take your word and risk losing a $550 drive?

You send me $550 and then I will open the case.
If all goes well… if I either fix the drive or Western Digital replaces it, then I will return the $550.

Thanks for the feedback, I’m just posting a reply to receive updates

Thanks for the feedback, I’m just posting a reply to receive updates

That functionality is built into this web site.

You might already be in a “Watching” state, because you posted a comment.
So take this comment as a helpful tip for future postings where you want to receive updates.

I have been using this WD software Diag for many years without any problems. There maybe other versions from WD that might send information if but they would have to ask you first, but I have not run into them. The person you called may have agreed that you didn’t want to run some program but the people mostly we speak with on the phone like that are reading from a sheet, did you plug in your machine etc. And I ran it on a node not connected to the lan and ran netstat, nothing.

If there’s no light and you don’t want to open the case yea then your stuck.

Every time you do a Windows Update, Bill G. Does an inventory on your machine.

Every time you do a Windows Update, Bill G. Does an inventory on your machine

I held my nose when I set up my two Windows based Chia plotters.

I wanted to run Linux. But my Linux trouble-shooting skills are lacking. Combined with knowing nearly nothing about Chia (at the time), it was simply too risky for me to try to get Chia up and running on Linux.

And it turned out that I did the right thing.

Micro Center had only Gigabyte B550 motherboards for my AMD Ryzen 9 5950X CPUs.
Those motherboards have a serious bug that constantly disconnects USB drives.

If I were running Linux, I would not have been able to determine if it was hardware or software at the core of the issue.

And I would have had a harder time blaming the motherboards, when I returned them to Micro Center.

After two weeks of waiting, Micro Center found two MSI motherboards for me (slightly different models), and it has been mostly smooth sailing from that point.

If I ever feel confident enough, I will (again) back up my Windows plotter / full node, install Linux + Chia, copy the blockchain back, and all will (hopefully) be hunky-dory.

So why don’t you buy yourself a birthday present and get another node? You can install Linux or windows on a couple of drives and swap back and forth for a play machine without interrupting your production farming. Or what I have done is install VMware Workstation and then you can make several machine on a single box. I know you were playing with some vm stuff earlier. But with a box that has some rocks you can have fun testing. This box I’m on now is running VMware workstation and I have guests running farmer and harvesters with the beta versions so I don’t mess with my production nodes. I install betas and report back the issues on github.

You have to have fun or its not worth it.

So why don’t you buy yourself a birthday present and get another node? You can install Linux or windows on a couple of drives and swap back and forth for a play machine without interrupting your production farming.

That is a great idea.

Alas, I have neither the room nor the budget for that endeavor.