I have been plotting for 113 days, without a re-boot.
I am surprised that Windows is able to run for this length of time, without acting up or insisting on a re-boot.

Linux, I believe, is known for running forever. But I did not expect this from Windows.

I am curious if others have Windows boxes that have stayed up this long, or longer? 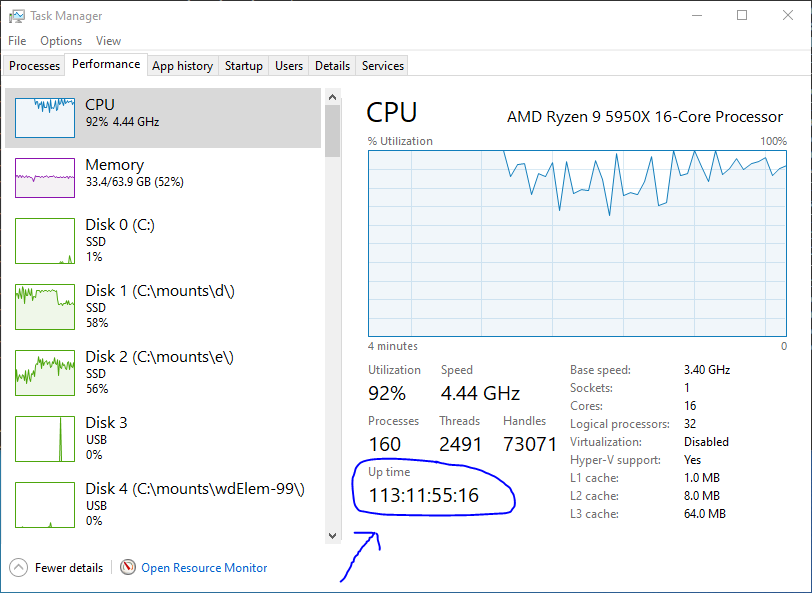 That’s nothing. I have windows systems that are up for longer, way longer.

I’ve had well over a year. Even on older systems such as Windows NT and XP.

Get a stable system with stable software (it’s badly written software more than the base OS which causes issues in my experience…) and don’t just install windows updates for the hell of it (otherwise you’re nagged for reboots every week at least…) and they’ll stay up almost forever.

having windows running for a long time is not an issue. Except for automatic reboots due to updates (Except you have a Windows server license or disabled them entirely which is a pain in the …)

I don’t know what exactly you are expecting. If windows was an inherently unstable system, name me a single reason why many companies would run their Servers for years on it. I have had servers run for 3-4 years without an issue.

…name me a single reason why many companies would run their Servers for years on it.

Neither I nor virtually any other home user is running Windows Server edition OS’s.
My posting was related to typical home use.

It has been my experience that Home versions are not as stable. It is likely due to businesses not installing bloat, which is not the case with the general public’s use of the Home version.

It is likely due to businesses not installing bloat

Fully agree. But I think there are more people using personal Windows edition than ubuntu.

If we are considering human factors, I do not know how reliable I’d state ubuntu. I have had countless of failures due to small errors.
Just as an example, I once tried to delete a folder with all subfolders. For some reason I forgot to type the path or mistyped it. Ubuntu just assumed I want to delete the root folder and all it’s content. And had no hesitation to do so.

Another example was me completely locked out out from my machine, as adding/removing a pcie card apparently changes the network interface name, thus the configuration in text file not working anymore. Those are things, which are quite unimaginable in Windows I think. They put way more efford into protecting their Operating system against users Stupidity (to put it in a freindly way for Microsoft)

For sure it was a steep learning curve to use ubuntu server. So much so, that I made an automatic provisioning script, for when I messed something up again.

As for windows server, I can’t state so much as this is my dayjob and I know it in and out. (Probably better than my pockets contents)

So it seems as nobody gets windows updates?

It has been my experience that Home versions are not as stable. It is likely due to businesses not installing bloat, which is not the case with the general public’s use of the Home version.

Which is why I stated above that it’s badly written software that causes most issues, not the windows OS itself. ‘Home’ versions are the same fundamental kernels as any other version. However, I don’t ever use anything other than ‘Pro’ versions of windows as I want some of their features that home versions traditionally don’t have.

If you absolutely must use Windows and want stability, NO telemetry, NO Windows app store, NO Cortana, NO XBox pre-installed garbage, then I suggest Windows 10 LTSC. This can run for years without intervention, if need be.

How did you get Windows to not self-reboot for updates once within 113 days???

My stupid work computer running Windows Enterprise can’t even accomplish that lol. I’m not a fan of Windows in case you couldn’t tell

How did you get Windows to not self-reboot for updates once within 113 days???

If it shows signs of acting up, I will 1) re-boot it, 2) connect it to the internet, 3) run Windows Update, 4) disconnect it from the internet.

Same here. But when I decided to run Chia, I did not want to complicate things by also running Linux.

If I run into a problem with Windows, I can deal with it. But not so with Linux.

And, in fact, I ran into problems, which turned out to be bad BIOS code in Gigabyte B550 motherboards.
If I had been using Linux, I would have made a bad situation worse, because of my minimal Linux trouble-shooting skills. Combine that with potential issues with Chia (which I knew nothing about), and that was too much for me.

Never buy Gigabyte hardware. They sell boards with known issues. They have countless complaints, do no recall, and even continue to sell the faulty boards. And – their customer service is worthless.

My reply transitioned into a bit of a rant. But that Gigabyte experience was time consuming and awful, and cost me financially, too.

Pro and Enterprise versions of Windows 10 supposedly allow you to manually grab updates (no forced updates). Since it is your work computer, your company might have a group policy in place that forces updates?

you are not the only person with gigabyte issues.
I have had good experience using asus. Others I have not tested much yet. (never touch a running system I guess)

Pro and Enterprise versions of Windows 10 supposedly allow you to manually grab updates (no forced updates). Since it is your work computer, your company might have a group policy in place that forces updates?

The different Windows versions are the same for most part. Except, Microsoft enabled/disabled specific features on the machines.
For example remote connection with RDP is only available for pro and enterprice versions I think. I personally only use Pro or Enterprice so I cant tell you much on the ‘Lower versions’

You can disable automatic updates using the Registry / Group policies.
Updates are then rolled out with an Update Server “WSUS” or another third party tool (But windows will complain with some messages in this case still)

Windows Defender is more of a hurdle.
Specific tools such as XBOX can be uninstalled with powershell and adminsitrative privileges.
After all, it is very cumbersome to clean windows properly. You may be easier off leaving those “tools” on windows.
If you really want a clean windows, get windows server. But the cost in this case is so high, that I moved to Ubuntu Server LTS.

So are you only using external USB disks and when their filled up you move them to a farmer?

Mine never run that long. But it is not because they are not capable, it is because I always run updates (windows and Chia) on a schedule. I go into the updates settings and under advanced options you can pause updates for a period of time. I set it to the farthest date available (normally about a month out). Then put it on my calendar to manually run updates the day before the pause runs out. Then I set it to paused again and do that over an over. This ensures the systems are always up to date and not allow them to auto install / reboot on me.

For security reasons, I like to keep them current on updates.

When you manually run Updates on Windows, you check in to the Windows Insider Program.

On Pro at least, you can - enable and then immediately disable updates - so in practice you never have to install any for as long as you want. The delayed update period starts anew when done in that way.

When you manually update you do not enter the Windows Insider Program. That needs to be done separately, then and only then you will get some other updates you may not want (betas, etc). But there is no requirement to be in the insider program to manually update.

I just wait for the infamous Update Tuesday - do updates if needed, and restart in a planned way. In fact, I find that - good practices - for Windows and Chia, as I still see some memory creep when on a farmer only PC. Maybe 1.3.0 will help, but I haven’t upgraded until bugs are worked out.

So are you only using external USB disks and when their filled up you move them to a farmer?

The plotter to which I was referring (box #2), has no internet connection. However, it does have a connection to my full node Chia box (#1).

Box #1 is able to access all of #2s drives, via “Map Network Drive” (or whatever Windows calls it – “net use blah blah blah”). The two boxes have a CAT 7 (or CAT 8?) cable providing connectivity between them, and are on their own private network.

I use a single drive letter for box #1 to see all of the drives on box #2, because all of box #2’s drives are NTFS mount points (not drive letters).

As far as box #1s config.yaml is concerned, box #2s drives are all just a drive letter with directory locations.

So it is possible for something to infect box #1 and find its way to box #2. But there is nothing of value on box #2. It is just a plotting machine with plots and no data worth anything to anyone.

And in order for someone to get to box #2, they have to comprise box #1, and there is no getting around the requirement for the full node to have an internet connection.

But I install nothing extraneous on box #1. It is a clean Windows install + Chia, and that’s it. I refuse to use its web browser or anything else (well, I use its calculator). Box #2 is the same, without the internet connection.

One day, when I feel adventurous, I will configure box #2 to be a harvester.

I have held off making that change, because everything is working, and I tend to leave what is not broken alone. But maybe I would get better response times if box #2 did its own harvesting?

Due to the location of box #1, I have to use a wireless connection to my ISP supplied router.
But since box #1 and box #2 are next to each other, I use a cable between them.

I have only two boxes, so there was no need for me to buy a switch to network them. And unlike yesteryear where you would need a crossover cable, today’s NICs accept any networking cable.

Why are you using mapped network shares ?